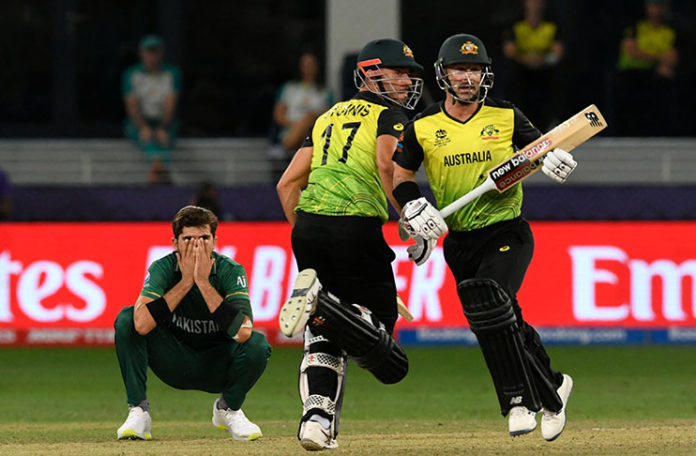 DUBAI: Australia has won the toss and decided to bowl first against Pakistan in the second T20 World Cup 2021 semi-final here at Dubai International Stadium on Thursday.

A stupendous fightback from Matthew Wade and Marcus Stoinis scripted a stunning five wicket win for Australia over Pakistan in the second semifinal of the T20 World Cup on Thursday.

But Stoinis (40 not out off 31 balls) and Wade (41 not out off 17 balls) turned Australia’s fortunes around despite the steep asking rate.

The two batsmen kept their calm and picked the right moments to go for the attacking shots.

Australia will now play New Zealand in the final on Sunday.

Earlier, Mohammad Rizwan’s fantastic stroke-play in the top order and Fakhar Zaman’s stunning assault on the Australian attack in the death overs were the two dominant factors in Pakistan’s reaching a challenging total.

On a wicket that offered little support to the Australian bowlers, it was skipper Babar Azam (39 off 34 balls, five fours) who gave Pakistan an impressive start.

Rizwan was slow to get off the mark. Having played first successive dots, Rizwan danced down the wicket to hit Glenn Maxwell out of the park only to mistime his shot.

Warner, running backwards from mid-off, tried his best but failed to hold onto the catch as the ball rolled onto the boundary.

The wicketkeeper-batsman then began to open up as Babar continued to find the gaps with immaculate timing.

After Babar fell to leg-spinner Adam Zampa, Rizwan began playing with more freedom. He also found a good partner in Zaman (55 not out off 32 balls).

The left-handed Fakhar hit the ground running as the two batsmen completely dominated Australia, sharing 72 runs for the second wicket off just 42 balls.

But after Rizwan’s dismissal, Asif Ali (0), the Pakistani six-hitting machine, failed to click on Thursday.

And the veteran Shoaib Malik (1) was bowled by Starc while trying to go for a big shot.

But Fakhar was magnificent until the end, hitting two stunning sixes over mid-wicket off Starc in the final over to help Pakistan post a challenging total.