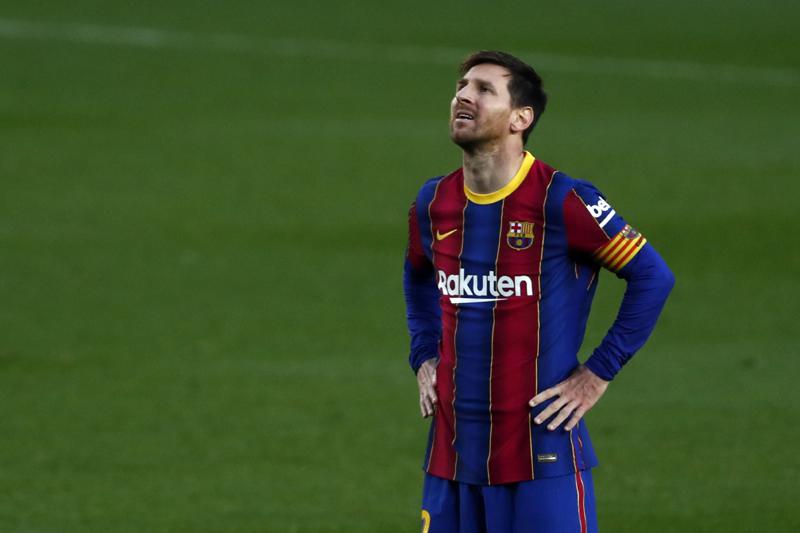 MADRID — Barcelona missed a chance to take over the Spanish league lead Thursday, losing 2-1 to Granada at home to squander an opportunity to take control of the title race.

Lionel Messi put the Catalan club ahead in the first half but Granada rallied for a surprise victory with two second-half goals at the Camp Nou Stadium.

The match was postponed from two weeks ago because of Barcelona’s participation in the Copa del Rey final, which it won over Athletic Bilbao.

A home win would have given Barcelona a one-point lead over Atlético Madrid with five rounds to go. Atlético, seeking its first league title since 2014, has led the league for most of the season but struggled recently. It lost 2-1 at Athletic on Sunday.

“We are upset,” Barcelona defender Jordi Alba said. “In two chances they scored two goals. We should have scored again to seal the match. Now we don’t depend on ourselves anymore. We have to win the final five matches and see what happens. It was a golden opportunity to take the lead after everything that we have gone through this season, but we let it slip away.”

Barcelona, seeking its fifth league title since 2014, stayed two points back in third place, tied on points with defending champion Real Madrid, which is coming off a home draw against Real Betis last weekend.

Barcelona hosts Atlético in a crucial match at the Camp Nou on Saturday.

Sevilla also remains in contention, sitting three points off the lead. It’s been nearly 15 years since four teams have entered the final stretch in contention for the Spanish league title.

Messi scored his fifth goal in his last four matches with a low cross shot from inside the area after a pass by Antoine Griezmann in the 23rd minute.

It was Messi’s 26th league goal to increase his lead at the top of the scoring chart. He has five more than Madrid’s Karim Benzema and six more than Villarreal’s Gerard Moreno.

The Argentine playmaker had a great chance to add to the lead shortly after the first goal, but he couldn’t find the net from close range in a one-on-one situation with Granada goalkeeper Aarón Escandell inside the area.

Granada, sitting in eighth place, scored with its only two shots on target at the Camp Nou. It equalized through Venezuelan forward Darwin Machís on a breakaway in the 63rd, then got the winner with a 79th-minute header by Jorge Molina. The club from southern Spain was missing some of its regular starters because of injuries.

Barcelona coach Ronald Koeman was sent off shortly after Granada’s first goal for complaining to the officiating crew.

Barcelona was seeking its third consecutive league win since it lost the “clásico” against Madrid this month.

The Catalan club has been making a late charge for the title after struggling early in the season, which could be the last with Messi if he doesn’t change his mind about leaving when his contract expires at the end of the season.

It is the team’s first season with Koeman in charge and under the command of new president Joan Laporta.

Barcelona has been one of the European clubs struggling the most financially because of the coronavirus pandemic.

US: Nuclear waste tank in Washington state may be leaking

Suarez double as Barca fight back to sink Inter