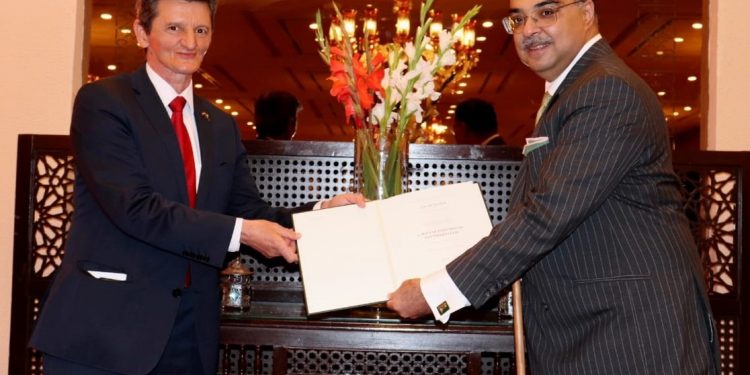 Mr Zafar Masud, President & CEO of The Bank of Punjab, was decorated with the highest civil award of Hungary for spearheading the initiative to further strengthen Hungarian-Pakistani cross-cultural ties, by restoring the historically significant Subcontinental artwork of Hungarian Artist August Schoefft.

The award, “The Officer’s Cross of the Order of Merit of Hungary”, was presented to Mr Masud by the Hungarian Ambassador to Pakistan, H.E. Mr. Bela Fazekash, on behalf of H.E. the President of the Republic of Hungary, in a ceremony in Islamabad. Also in attendance at the event were officials of the Embassy of Hungary, and other local and foreign dignitaries.

Speaking at the occasion, Mr Masud said, “The restoration of the 19th century Hungarian Artist August Schoefft’s paintings at Lahore Fort through experts from Hungary to their original grandeur was fully sponsored by The Bank of Punjab as being one of its most significant Corporate Social Responsibility initiatives. It signifies the importance attached by BOP towards preserving our national – and our common International heritage, tying very closely to our value proposition.”

Mr Masud also said, “These paintings portray an important period of the Subcontinent’s, and now Pakistan’s, history; and are a precious surviving testament of the common heritage of Hungary, Pakistan and the Sikh Community. This is to my mind is a true depiction of our tolerance and acceptance for all cultures and societies, as a nation.”

Mr Fazekash, the Hungarian Head of Mission, said that this award is presented to Mr Masud “in recognition of his outstanding contributions to strengthening Hungarian-Pakistani cultural cooperation.” He further said that this initiative to restore and exhibit the 11 Schoefft paintings at the Lahore Fort could not have been realized without the generous sponsorship of the Bank of Punjab.