Colombia shifts strategy in drug war away from coca eradication 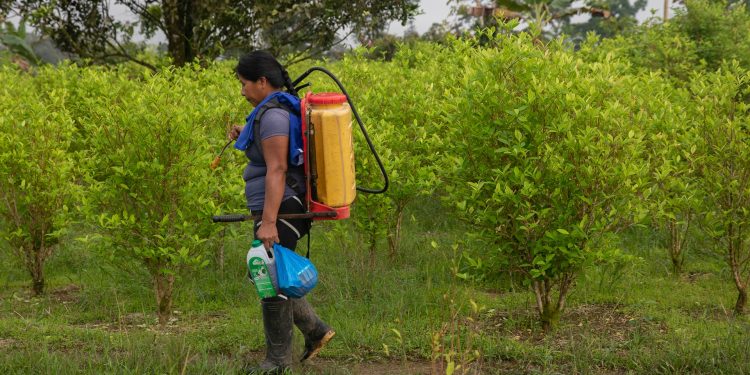 Bogotá, Colombia — After promising to radically change Colombian drug policy, the administration of President Gustavo Petro has announced plans this month to reduce forced eradication efforts that, for decades, have remained one of the country’s chief strategies to curb coca, the raw ingredient in cocaine.

Illegal coca farming is big business in Colombia. The country is the world’s largest cocaine producer, and the cultivation of the coca plant recently hit record levels, with the United Nations Office on Drug and Crime (UNODC) estimating that 204,000 hectares (504,095 acres) were dedicated to its production in 2021.

In an effort to combat the drug trade, Colombia has historically deployed security forces to fumigate and manually remove coca crops from the ground. But the left-wing Petro administration has promised to shift tactics, moving away from policies that disadvantage subsistence farmers and promising instead to pursue drug-trafficking leaders.

The government is expected to announce eradication targets for the military, also charged with removing coca crops, at a later date.

The reduced eradication goals are the latest policy change in the administration’s ongoing effort to upend the decades-long War on Drugs, a campaign led by the United States that Petro, a former rebel fighter, has been critical of. His administration has announced plans instead to offer economic alternatives to coca farmers.

“We’re going to give oxygen to certain activities and to asphyxiate others: oxygen to the weakest links in the chains, to the coca farmers, and asphyxia to the traffickers, to the money launderers and mafias,” Minister of Justice Nestor Osuna said in December.

But as Petro experiments with a new anti-narcotics strategy, the president will face pressure, both internally and internationally, to reel in the expanding coca industry.

“Petro’s point of view is completely different,” said Gimena Sánchez-Garzoli, Andes director of the Washington Office on Latin America, a research organisation. “But in particular, it’s his views on drugs that are seen by the upper classes in Colombia and the drug warriors in the United States as completely worrisome.”

He unsuccessfully attempted to resume aerial fumigations with glyphosate, a strategy that had been banned by the government in 2015 when the World Health Organization classified the herbicide as a probable carcinogen.

“I don’t think there has ever been a greater effort in forced eradication than there was in the Duque administration, and it still wasn’t effective,” said Maria Alejandra Velez, director of the Andes University’s Center for Studies on Security and Drugs. “There’s concrete evidence that eradication wasn’t the solution.”

Petro has opted for a different method that stems from the idea that Colombia’s drug problem is fuelled by inequality. He has eschewed aerial fumigations and promised to focus eradications on so-called “industrial fields”.

In an interview with Al Jazeera, Colombia’s Ministry of Justice described such fields as vast coca farms, where a residential home and crops other than coca are absent. Their size far exceeds that of a sustainable family farm, known as a family agricultural unit.

“These are not small coca farms,” said Sonia Rodriguez, a spokesperson for the Ministry of Justice. “It’s in these areas that it’s confirmed we will conduct eradications.”

Rising coca production remains a shared concern for the US and Colombia. Experts believe that the unprecedented growth in coca farms is owed to factors including an increase in global cocaine demand and changes in Colombia’s decades-long armed conflict.

Another factor has been the rocky rollout of a plan to offer subsidies and economic alternatives to coca farmers who voluntarily pulled up their crops. The program was initially developed as part of the historic 2016 peace deal between the Revolutionary Armed Forces of Colombia (FARC) — the country’s largest armed group at the time — and the government.

But the subsidies to launch long-term businesses failed to materialise, provoking a crisis among farmers who could no longer grow coca nor afford to finance a new venture. The UNODC reported that by 2020, about 100,000 coca-farming families had voluntarily eradicated their crops.

Petro has pledged to deliver on the promised subsidies and introduce more families to the program, complementing it with investments in agrarian reform, rural infrastructure and development.

Some parts of the program will also be redesigned with input from coca growers. The first assembly of coca growers convened in December in Norte de Santander, a province on the Venezuelan border that has the second-largest area of coca production in the country. An estimated 8,000 people from across the region submitted proposals for the conference.

The government has already accepted one of the proposals — to allow coca farmers to keep their crops until their alternative businesses are economically sustainable. In the past, farmers had to eradicate their coca crops before receiving subsidies.

“I will tell the officials to create a program in which the farmer can grow coca as they plant substitute crops until that substitute crop works. If it works, then there will be no need for the other,” Petro told a packed stadium of farmers in December.

But farmers have also called for the cessation of all forced eradication operations, which they say have devastated their livelihoods, displaced families, increased deforestation, and provoked violent confrontations between farmers and security forces.

In response to the police’s new eradication goal, Juan Carlos Quintero, leader of the Peasant Farmer Association of Catatumbo, said any effort to forcibly remove crops “creates violence and mistrust”. He added that the use of force should be deemed a last resort.

The US State Department has also pushed back against the reduction in eradication targets but for different reasons. In a statement, it said that “it’s fundamental to make full use of all the available tools to reduce coca cultivation”, including forced crop eradications.

Petro has had to tread a fine line between appeasing Washington and keeping his promises to reform Colombia’s drug policies. The US is Colombia’s most important ally and the largest donor to the Colombian peace deal.

Garzoli-Sánchez, the Andes adviser at the Washington Office on Latin America, pointed out that Petro’s policies appear to align with Washington’s priorities, at least on paper.

The administration of US President Joe Biden has touted a “holistic” approach to disrupting drug trafficking, with emphasis on rural development, security and the implementation of the 2016 peace deal. But, Garzoli-Sánchez said, there are still sectors within the US State Department and Congress that support use of military force.

“The problem is that [Biden’s] policy on Colombia is still not the main view in Washington among anti-narcotics people,” said Garzoli-Sánchez.

Professor Velez of Andes University said that the shift away from crop eradication means that the success of Petro’s anti-narcotic efforts now hinges on other measures, of which there are few details.

In October, President Petro said that Colombia and the US were working together to disrupt the narcotics trade by air and sea and boost their intelligence capabilities.

But Petro’s success will also depend on consolidating deals with coca growers to ban the expansion of their crops, Velez said.

Quintero, the president of the peasant farmer’s association, said he believes a deal can be struck, one that would empower local leaders to monitor farms with support from the government and the international community.

“It doesn’t have to be the military because there’s no trust in the military,” said Quintero. “Who better to do this than the farming organizations who hold power in their communities?”