Cost of living: A refugee family runs out of food in Hong Kong 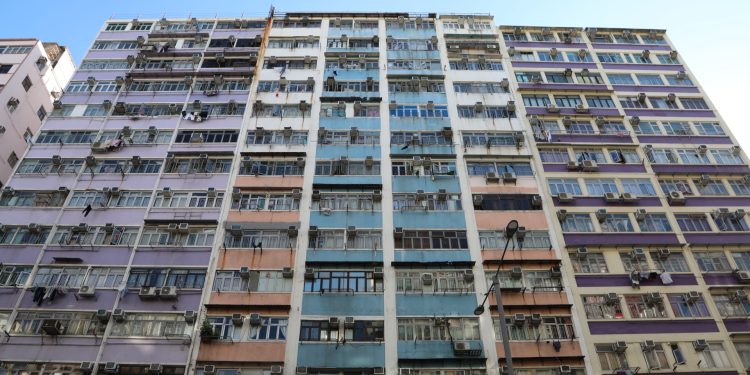 Hong Kong – Slouched against the lone, grime-covered, grated window of his tiny apartment in the working-class neighbourhood of Sham Shui Po in Hong Kong, there is a look of despair in 41-year-old Rana’s* brown eyes.

One of his feet, visibly swollen, is angled high up against the wall of peeling, off-white paint as the asylum seeker from Bangladesh recalls the recent accident that left him unable to walk for several days.

“I was on a construction site carrying some tools and a metal girder fell on my leg. It hurt so much. I am lucky it didn’t snap anything,” he says.

For decades, many of those like Rana seeking refuge in the former British colony have been forced to scrape by in extremely challenging conditions, from substandard housing to harsh limits on daily activities.

Most asylum seekers in Hong Kong are banned from having jobs, so he was technically breaking the law when he was injured. But he feels his family’s desperate financial situation left him with no choice.

“Sometimes I have to do work, even though I know it’s illegal,” he says, folding his arms with a grimace.

The daily stipend is barely enough to get by, especially in what was until recently the most expensive city in the world.

‘What choice do we have?’

With the cost-of-living crunch bleaker than it has ever been and rocketing inflation that has seen everything from food to electricity and clothing become less affordable, the stipend asylum seekers receive has nevertheless remained frozen since 2014.

According to research by the Hong Kong-based non-profit Refugee Union, which is run by refugees and asylum seekers, prices for some food staples have doubled this year. A separate analysis by the NGO Justice Centre found that the average price per kilogramme of Chinese lettuce, a local staple, more than quadrupled from 5.70 Hong Kong dollars to 24.90 Hong Kong dollars ($0.73 to $3.20). In September, Hong Kong’s consumer inflation rate hit its highest level since 2015.

“We ran out of food,” says Rana’s wife, Akter*, as she gazes at the frenetic traffic below.

The couple spends most of their time in their cramped, 200sq feet (18.6sq metres) apartment in a ramshackle tenement building in a neighbourhood infamous for its “coffin homes” – so named because of their tiny size. Their apartment on one of the upper floors can be reached only via a dimly-lit stairwell filled with rat droppings.

Down below, the streets are a cacophony of hawkers and traders selling black market goods. Impoverished elderly women offer up their possessions on mats spread across the ground; others gather rubbish to earn income from recycling.

“We had to sell things in the house,” says Akter, whose tone shifts from initial sadness to pure exasperation. “It’s too much expensive. Everything, everything. The government doesn’t give us enough money.”

After being pushed to extremes a few years ago, Rana began taking on illegal part-time work on a construction site to make ends meet for the family. Yet the risks are enormous. In 2018, he was sent to a Hong Kong correctional facility for 13 months after he was caught working, separating him from Akter.

This November, Rana took up work again, before he was injured when the girder fell on his leg, leaving him temporarily unable to walk or work.

“I don’t want to be doing this. But what choice do we have?” he says, mulling the choice between breaking the law or leaving his family without food.

‘Food is so expensive’

For Akter, 32, the pressure of tending to a two-year-old and a six-month-old takes things to a whole new level. Yet she strides around the room with purpose – to clean, collect toys and deal with any number of issues the day throws up.

“My children are very small,” says Akter, who cooks just one batch of food in a large steel pot each day to feed the family of four. “I’m worried that they aren’t getting enough to eat. But food is so expensive. We can’t afford many vegetables.”

She usually cooks up large rice dishes, and on better days, stews chicken and eggs. The family has never eaten at a restaurant, the couple says.

Akter fled Bangladesh in 2017 after she was raped and her family disowned her. Hong Kong seemed to be a land of opportunity, where she could start anew, seek asylum and make a living for herself in a global megacity. But that new life took a while to adapt to. For the first two years, she says, she would walk the streets and simply cry; she barely ate.

Rana meanwhile is a political refugee who escaped Bangladesh when he faced threats due to his involvement in opposition politics. He ended up in Hong Kong in 2016. “I can’t go back home,” he says. “But I can’t live like this.”

The pair, who met and fell in love in Hong Kong, made an effort to carve out a home, taping pictures of loved ones to the wall.

But conditions are grim: cockroaches scuttle all over the one-room apartment – which is just wide enough to fit their bed in lengthways – along the rims of pots and pans and between cracks in the floor. Laundry hangs to dry just above their heads because there is no other space.

“I don’t have friends who can help,” says Rana, with a tired shrug of his skinny shoulders and a blank expression on his face. “We are all in the same situation.”

The status of refugees

Despite its wealth, Hong Kong is one of the most unequal cities in the world. For asylum seekers – a vulnerable, marginalised underclass – there are fewer and fewer ways to survive.

Hong Kong has an estimated 14,000 refugees and asylum seekers, the vast majority of whom are barred from employment. While 143 countries and territories have agreed to the 1951 United Nations Convention Relating to the Status of Refugees and its 1967 protocol, Hong Kong is not a signatory of either, instead adopting its own “Unified Screening Mechanism” to determine asylum claims.

According to official data, less than 1 percent of asylum claims have been substantiated since 2014. And 65 percent of those happen on appeal, suggesting there are issues with the initial process.

The result is that Hong Kong’s refugees are trapped in desperate poverty.

The stark divide is highlighted by the fact that the city of 7.4 million simultaneously has more than 125,000 millionaires and 1.65 million people living in poverty.

While the city’s central business district is lined with shimmering skyscrapers, Michelin-starred restaurants and high-end fashion stores, on the pavement below, poor domestic workers, with nowhere else to go, spend their time off relaxing on the torn shreds of cardboard boxes.

Mounting pressures nearly culminated in disaster earlier this year amid panic buying as the city’s strict pandemic policies led to food shortages at ParknShop, the only supermarket chain where refugees and asylum seekers in Hong Kong are allowed to spend their food subsidy, provided by the Social Welfare Department. ParknShop does not sell halal meat, further excluding already marginalised Muslim asylum seekers like Rana and Akter.

A survey released by Refugee Concern Network earlier this year found that 73 percent of asylum seekers were struggling to buy food and ​​about 60 percent were unable to buy other necessities, such as toiletries. The government subsidy for asylum seekers only allows for food items, therefore non-food necessities such as diapers cannot be bought, leaving many reliant on donations from local charities.

In a rare touch of solace, Rana and Akter have been receiving milk powder and diapers from a local charity since the pandemic struck.

Beyond the bare necessities of food, other equally serious pressures are cranking up. The effects of climate change and extreme heat have become ever-more tangible in the family’s ageing apartment as record heat struck Hong Kong this year – including some of the hottest days since records began in 1884. In turn, the rising cost of energy has meant that the use of air conditioning is even more costly.

After electricity bills rocketed this summer, in part due to Russia’s invasion of Ukraine and in part due to warmer temperatures, the family was forced out of the house during the peak daylight hours to cool down in public libraries and malls, where they cannot afford to buy anything. “The AC became too much for us to pay,” says Rana. “It was too uncomfortable to stay at home, even if we were doing nothing.”

This perfect storm of worsening conditions means asylum seekers like Akter and Rana risk becoming a forgotten population in the global cost-of-living crisis.

For some, hopes rose when Hong Kong’s new chief executive, John Lee – who pledged in his election manifesto to forge a “more caring society” – was sworn in in July.

But any improvement has yet to materialise for Akter, Rana and their young family as they struggle to stay afloat. Instead, they dream about being given the opportunity to earn a basic living for themselves.

“I would like a future, I want a future,” says Rana, his deep-set eyes beginning to well up as he speaks. “Because now I don’t have one.”