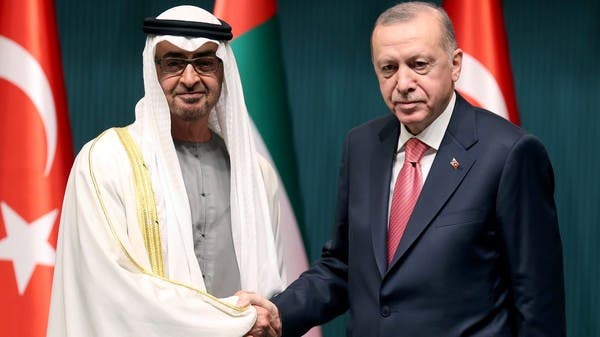 President Recep Tayyip Erdogan and his accompanying delegation upon his arrival at the Presidential Airport in Abu Dhabi was received by Sheikh Mohamed bin Zayed Al Nahyan, Crown Prince of Abu Dhabi and Deputy Supreme Commander of the Armed Forces on Monday 14.

Sheikh Mansour bin Zayed Al Nahyan, Deputy Prime Minister and Minister of Presidential Affairs were also among the officials to receive the guests. President Erdogan arrived on board a Presidential flight.

The two countries will sign numerous agreements after the leaders hold bilateral talks.

The visit marked a landmark step towards strengthening ties between the two countries, revolving around mutual interests.

Before he departed from Ankara, Erdogan tweeted, “We started a new era in Turkey – UAE relations when Sheikh Mohammed bin Zayed visited us in 2021. Today, we set out for Abu Dhabi to build on this momentum.”

“When matched by strategic and courageous action, such speech can be a great force that checks instances of injustice and violence, the like of which we see in Syria, Palestine, Somalia, Afghanistan and Iraq,” said Erdogan.

Emphasising the importance of improving the methods of communication between governments and their people especially in light of the major changes taking place in the world in general and the Arab region in particular, Erdogan said: “Communications must encourage the government and the people to get closer, to understand each other and work together.”

He wrote: “The dialogue and cooperation between Turkey and the United Arab Emirates are important for the peace and stability of our entire region. We do not consider the security and stability of all brotherly countries in the Gulf region separate from our own.”

The Emirati-Turkish relations witnessed a qualitative leap with the visit of Sheikh Mohammed bin Zayed to Ankara in November 2021, at the invitation of the Turkish President.

The trade volume between the UAE and Turkey in the first half of 2021 stood at more than Dh26.4 billion, with a growth leap of 100 per cent, compared to the same period in 2020.

The relations between the UAE and Turkey are witnessing continuous development in vital sectors, mirroring the keenness of the leadership of the two countries to develop joint work and create more opportunities for cooperation, state news agency Wam reported.