From ‘hungry days’ to Bollywood legend: How Lata Mangeshkar became the ‘Nightingale of India’

The subcontinent's legendary singer passed away at 92 on Sunday. 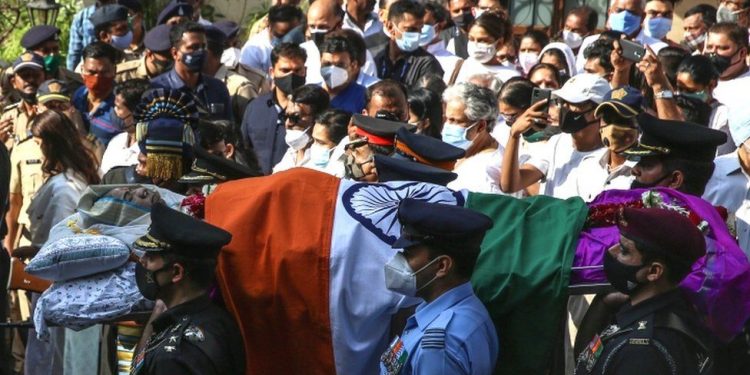 Dubai News
The ‘Nightingale of India,’ Lata Mangeshkar, 92, who passed away Sunday morning at the Breach Candy hospital, was an iconic personality, who loved the city where she built her remarkable career.

Born in Indore, she was the eldest child in a family of four children, all of who emerged as major singers: Meena Khadikar, Asha Bhosale, Usha Mangeshkar and Hridaynath Mangeshkar.

The singer, who was awarded the Bharat Ratna, India’s highest civilian award, the Padma Bhushan and the Padma Vibushan, has sung more than 25,000 songs (in 20 languages) in her career spanning over seven decades.
“I started singing five years before India gained independence,” she recalled in an interview. “It was 1942, and I was 13 years when I became a professional singer. To have lasted so long is nothing short of a miracle, I agree. But it is also a lot of hard work. I don’t want to glorify my childhood struggle. But it wasn’t easy being a professional at that age.”

Lata Mangeshkar remembered those days of humiliation when “I would go hungry the whole day. On many occasions, I didn’t have money to travel by bus or train. I’d walk from one end of town to another.”
Way back in the late 1940s, Lata Mangeshkar used to live in south Bombay and would travel by local suburban trains to Malad, the northwest suburb, to record songs at a studio.
“One day Anil Biswas, Yusuf bhai (Dilip Kumar) and I were travelling to work together on a train,” the singer was quoted in ‘Lata Mangeshkar: In Her Own Voice.’ “This was in 1947 or ’48. In those days, Yusuf Bhai was able to travel by train as no one really recognised him! We were sitting in a compartment and Yusuf Bhai asked who I was.”

When Biswas told Dilip Kumar that she was a Maharashtrian, the actor wondered whether her Urdu pronunciation would be right. Concerned about it, Lata decided to learn Urdu so she could pronounce correctly.

She quickly managed to find an Urdu teacher and soon mastered the language. “When I speak, my Urdu isn’t very good,” she said. “But when I sing I make sure there are no flaws in my diction.”

When she was recording the remarkable song ‘Aayega aanewala…’ for Mahal, Bollywood star Nargis was in the studio along with her mother, Jaddanbai, a celebrated singer. “She called me and asked my name and whether I was Maharashtrian,” recalled Lata. “She said my Urdu is very good.”

The singer recalled that she first listened to someone who speaks a language reads lyrics to her. “I pay great attention to pronunciation,” she said. “By the grace of God, my songs in other languages, including Bengali, have been appreciated. People say they are good and the words have been correctly pronounced.”

In those days when Lata got into playback singing, Noor Jahan was the reigning queen in Bollywood. And Dilip Kumar found Noor Jahan to be the best singer. Dilip’s comments about Lata did not go well with her and for more than a decade the two were not on speaking terms.
From the 1940s, Lata sang duets with top Indian singers including her sisters Asha Bhosale and Usha Mangeshkar, Suraiya, Shamshad Begum, Kishore Kumar, Mohammed Rafi, Mukesh, Talat Mahmood, Manna Dey, Hemant Kumar and Mahendra Kapoor.

Later in her career, Lata travelled across the globe, performing at major events. This correspondent recalls interacting with Lata Mangeshkar in Dubai, where she performed in the early 1990s. Sitting in the auditorium where she was practising before the show, it was a memorable journey as she took time to talk about the great (sometimes even stubborn) personalities she interacted with over the decades.