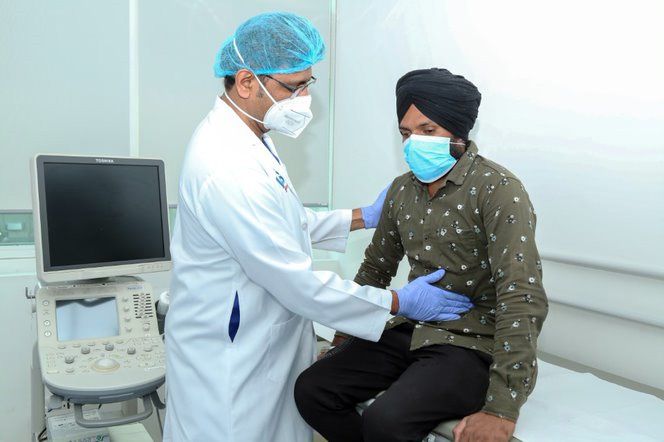 Dubai News: A 27-year-old Indian expat, fighting recurring chronic pain for a year, is relieved after 40 stones were removed from his ureter through an innovative minimally-invasive procedure in Abu Dhabi.

Balkar Singh, a carpenter at a construction company, had a rare congenital disorder of developing stones blocking the ureter causing severe pain and distress. Stones varying between 8mm to 25mm in size were removed without a single cut being made on the patient in a two-and-half-hour-long procedure at Lifecare Hospital in Mussafah.

“About a year ago, I started getting pain in the lower left portion of my stomach. Then I was in India and did not consider it seriously. Later, my pain aggravated. I went to a doctor in my hometown and he recommended surgery. But I was planning to come to Abu Dhabi then. So, I postponed the surgery and instead took medications to control the pain,” Singh, a resident of Mussafah 11, said.

However, his pain continued while working in Abu Dhabi and Singh grew dissatisfied with the quality of life.

“Initially, I used to get pain intermittently. It was manageable. But a few months later, my condition worsened. It became excruciatingly painful. My pills were not helping me much. I consulted a few doctors here but it didn’t help,” Singh noted.

On his friend’s advice, Singh consulted Dr Althaf Hussain, a specialist urologist, at Lifecare Hospital. A detailed investigation, X-ray and ultrasound scan showed he had developed multiple stones in his ureter leading to a blockage.

“I was shocked when the doctor told me that there were about 40 stones in my ureter. I could not believe it. I was scared but the doctor consoled me that I would be fully healthy after the procedure.”

“The condition is called ureterocele, which causes swelling of the ureter. But in this case, he had a rare condition of a swollen ureter blocked by multiple stones. It is a rare occurrence.”

Dr Althaf chose to follow the unconventional method to operate the stones through a minimally-invasive procedure by combining laser and endoscopic technologies.

“We opted for laser therapy to break the stones and remove it through the bladder without making any incision on the body. The blocked ureter was opened inserting a stent. Ideally, doctors would have preferred an open surgery to remove the stones but it involves multiple risks of incurring injuries to the bladder and vessels. Also, recovery would take a longer time,” the doctor said. “I had explained the procedure in detail to Singh and he chose to undergo the laser therapy. Removing 40 stones is a large number from a single ureter by this procedure. He is fine and back at work.”

After the surgery, Singh was discharged the next day and thanked the medical team for care and support. Now, he is reassured and self-confident, and said he feels healthy and has no pain.

458
No Result
View All Result