Sharing such clips put the military systems and other vital installations at risk. 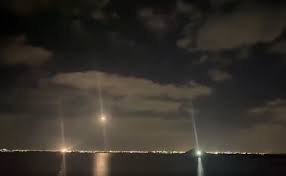 Some UAE residents have been summoned for posting and sharing videos showing the country’s defence systems intercepting and destroying ballistic missiles fired by the Houthi terror group earlier this week.

The UAE Public Prosecution warned that such clips put the UAE’s military systems and other vital installations at risk.

Dr Hamad Saif Al Shamsi, Attorney-General of the UAE, confirmed relevant legal measures will be taken against those who published the videos on social media. He warned residents to not forward or share such clips as they would cause panic in the country.

“We trust the residents’ awareness to not circulate such posts,” he said.

Earlier this week, the UAE’s defence systems intercepted and destroyed the missiles over Abu Dhabi in the early hours of Monday. Residents reported seeing flashes in the night sky and hearing loud sounds as the country downed the missiles. Some of them posted videos.

As is the case when news reports like these emerge, social media and the internet were abuzz with information, some of them misleading and even fake.

The Ministry of Defence had urged residents to follow developments of the news from the UAE’s official sources.
In the UAE, social media use is governed by laws that ensure protection and privacy. Spreading information that is not verified by the official sources amounts to a criminal offence, according to the UAE government’s official website.

Rumours and content that is misleading and biased are prohibited.

As per the UAE’s new cybercrime law, anyone who uses the internet to publish, circulate or spread false news, rumours or misleading information, contrary to the news published by official sources, could be punished by imprisonment for at least one year and fined Dh100,000.

In case the false news agitates public opinion against state authorities or occurs during times of pandemic, crises or disasters, the violator could be imprisoned for at least two years and fined Dh200,000.

“Under the new provision, online users who share incorrect information are also part of the crime, not only the publisher. Now everyone has the responsibility to confirm the information they receive before sharing it or risk being jailed,” Ghassan El Daye, partner and head of litigation in Middle East at Charles Russell Speechlys, had told Khaleej Times earlier.