India-UAE travel: Suspension of arrivals extended until May 14

Earlier, all flights from India to the UAE had been suspended for 10 days from 11.59pm on April 24. 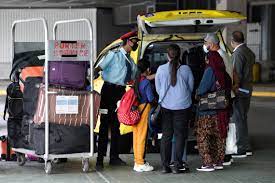 The suspension of carriage of passengers from India to the UAE on flights has been extended, travel agents have been told.

This came as India set another global record in new Covid-19 cases on Thursday with 379,257 new infections.

In a circular, Emirates Airline told agents that the suspension will be in place till May 14.

Emirates also confirmed the suspension as it responded to passenger queries on Twitter.

Multiple travel agents in the UAE confirmed receiving the circular.

Passengers who have transited through India in the last 14 days are not permitted to board from any other point to the UAE.

Earlier, all flights from India to the UAE had been suspended for 10 days from 11.59pm on April 24.

Cargo flights between the two countries are not affected.

UAE nationals and diplomatic missions between the two countries, official delegations, businessmen’s planes and Golden Visa holders were excluded from the decision. Those exempted are required to undergo a mandatory 10-day quarantine.

They also have to take PCR tests for Covid on fourth and eighth days of entry.

India now has reported more than 18.3 million cases, second only to the US. The health ministry also reported 3,645 deaths in 24 hours, bringing the total to 204,832. Experts believe both figures are an undercount, but it’s unclear by how much.

India has set a daily global record for seven of the past eight days, with a seven-day moving average of nearly 350,000 infections. Daily deaths have nearly tripled in the past three weeks, reflecting the intensity of the latest surge. And the country’s already teetering health system is under immense strain, prompting multiple allies to send help.

10 boys and teens among the dead in Israel festival stampede

Bitcoin shed a fifth of its value on Saturday as a combination of profit-taking and macro-economic concerns triggered nearly a billion dollars worth of selling across cryptocurrencies. Bitcoin was 12%...