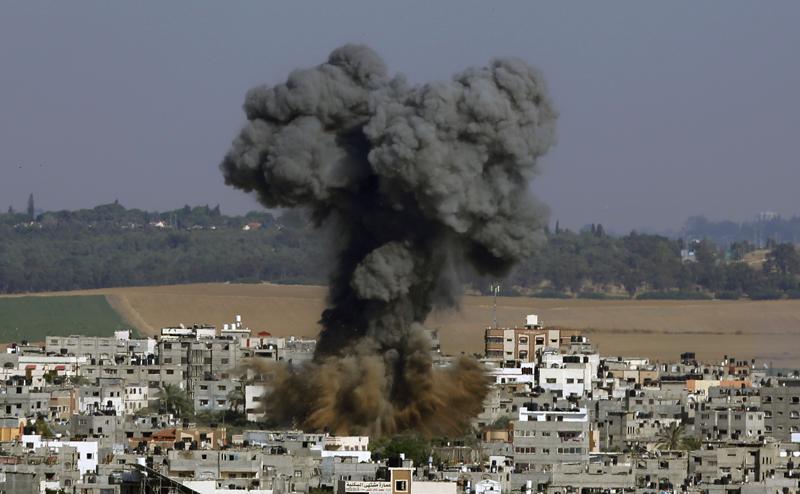 GAZA CITY, Gaza Strip — A confrontation between Israel and Hamas sparked by weeks of tensions in contested Jerusalem escalated Tuesday as Israel unleashed new airstrikes on Gaza while militants barraged Israel with hundreds of rockets. The exchange killed a number of militants and civilians in Gaza and at least two Israelis.

The barrage of rockets from the Gaza Strip and airstrikes into the territory continued almost nonstop throughout the day, in what appeared to be some of the most intense fighting between Israel and Hamas since their 2014 war. The fire was so relentless that Israel’s Iron Dome rocket-defense system seemed to be overwhelmed. Columns of smoke rose from many places in Gaza. 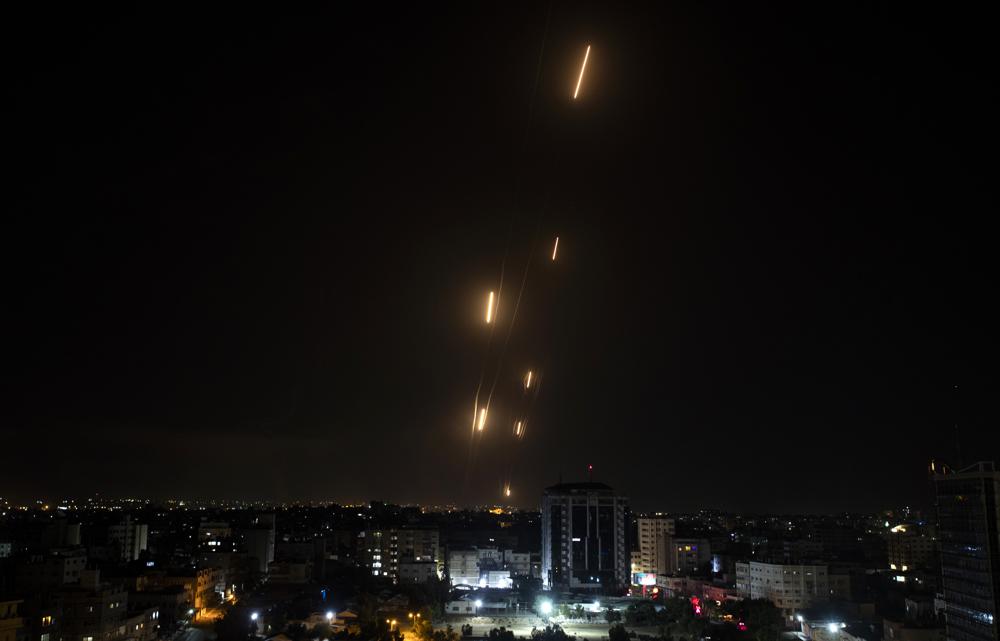 By late Tuesday, the violence extended to Tel Aviv, which came under fire from a barrage of rockets launched from the Gaza Strip. The outgoing volleys set off air raid sirens across the city, and the main international airport quickly closed.

Hamas said it launched a total of 130 rockets, its most intense strike so far, in response to Israel’s destruction of a high-rise building in Gaza earlier in the evening. The sound of the outgoing rockets could be heard in Gaza. As the rockets rose into the skies, mosques across Gaza blared with chants of “God is great,” “victory to Islam” and “resistance.” 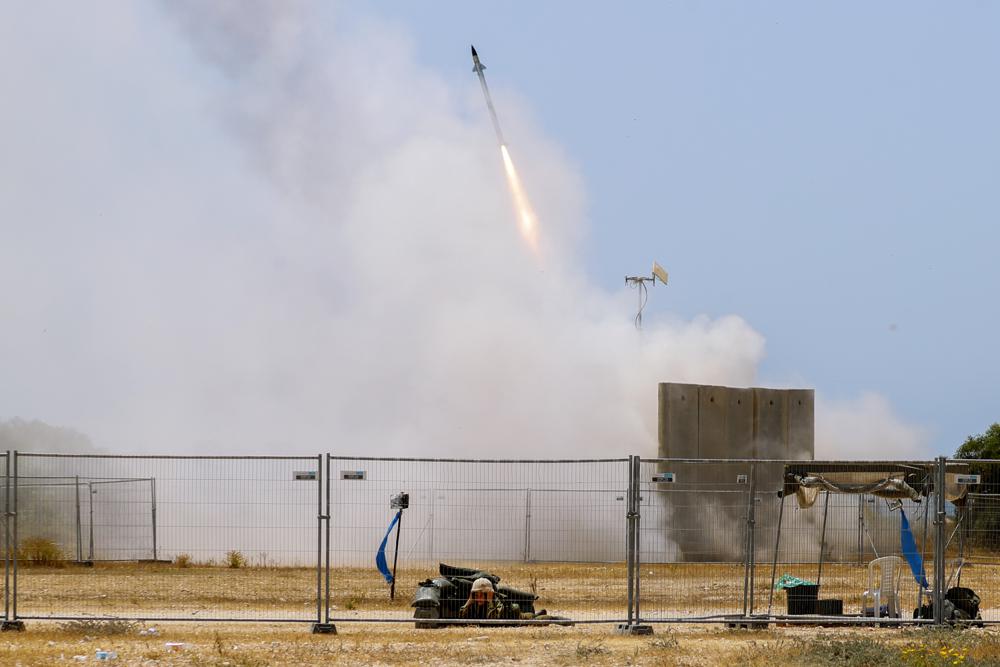 One rocket struck a bus in the central city of Holon, just south of Tel Aviv. Medics said three people, including a 5-year-old girl, were wounded and the bus went up in flames.

Since sundown Monday, 28 Palestinians — including 10 children and a woman— were killed in Gaza, most by airstrikes, health officials there said. The Israeli military said at least 16 of the dead were militants.

Two women were killed by rockets fired from Gaza that hit their homes in the southern city of Ashkelon — the first Israeli deaths in the current violence. At least 10 other Israelis have been wounded since Monday evening.

After those deaths, Israeli Prime Minister Benjamin Netanyahu said officials decided to “increase both the strength and rate of the strikes” against militant groups Hamas and Islamic Jihad in the Gaza Strip. 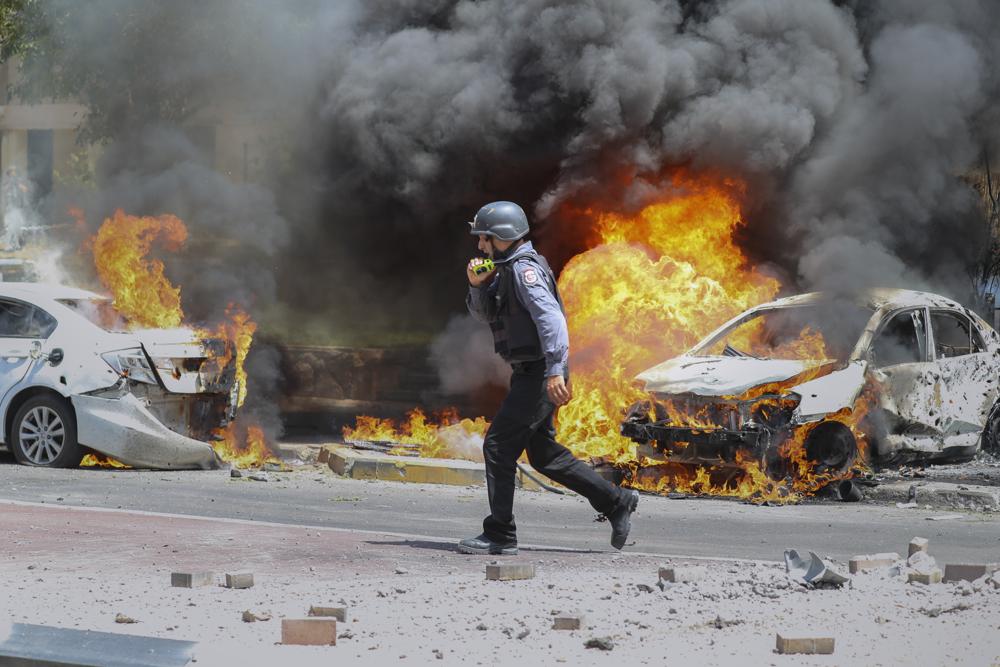 Egyptian officials said they were trying to broker a cease-fire, but the cycle of violence was gaining momentum. Even before the two Israeli deaths, the Israeli military said it was sending troop reinforcements to the Gaza border, and the defense minister ordered the mobilization of 5,000 reserve soldiers.

Lt. Col. Jonathan Conricus, a military spokesman, told reporters that Israel was beefing up defensive forces on the border to prevent possible infiltrations and increasing its offensive forces as well, primarily in the air.

He said the objective was to send a “clear message” to Hamas.

The barrage of rockets and airstrikes was preceded by hours of clashes Monday between Palestinians and Israeli security forces, including dramatic confrontations at Jerusalem’s Al-Aqsa Mosque compound, a sacred site to both Jews and Muslims. The current violence, like previous rounds, including the last intifada, or uprising, has been fueled by conflicting claims over Jerusalem, which is at the emotional core of the long conflict. 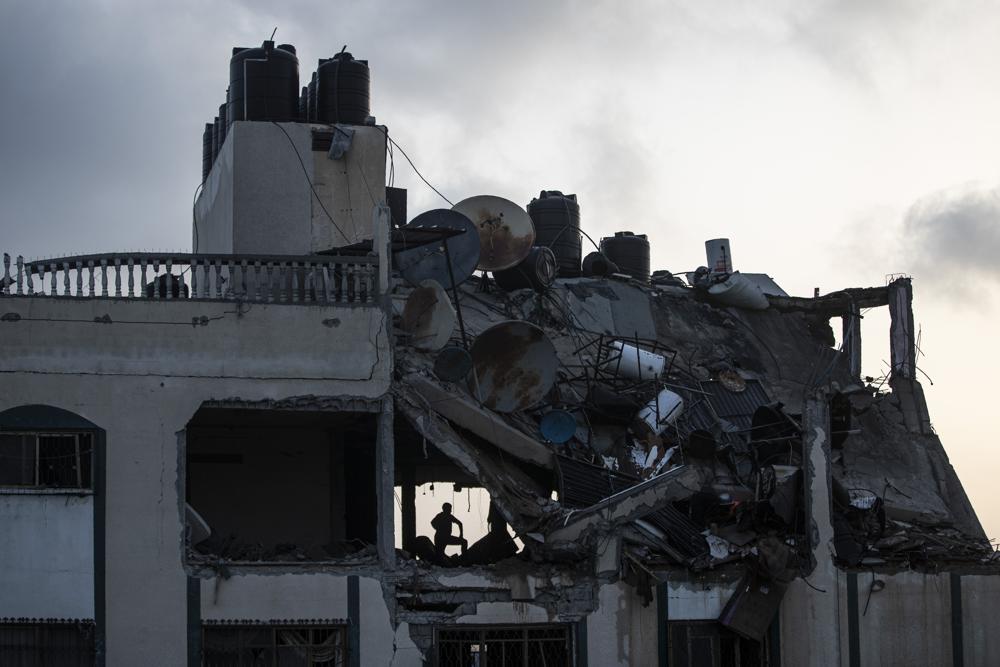 In a sign of widening unrest, hundreds of residents of Arab communities across Israel staged overnight demonstrations denouncing the recent actions of Israeli security forces against Palestinians. It was one of the largest protests by Palestinian citizens in Israel in recent years.

In the central Israeli town of Lod, police fired tear gas and stun grenades after mourners threw rocks at officers during the funeral of an Arab man allegedly shot to death by a Jewish resident the night before. Thousands took part in the funeral, and police said the crowd set fire to a patrol car, a bus and a motorcycle. Two police officers were injured.

Israel and Hamas have fought three wars and numerous skirmishes since the militant group seized control of Gaza in 2007. Recent rounds of fighting have usually ended after a few days, often helped by mediation by Qatar, Egypt and others.

Israel carried out dozens of airstrikes, including two that targeted high-rise apartment buildings where militants were believed to be hiding.

One strike demolished a 12-story building in Gaza City that housed the offices of top Hamas officials. Israeli drones fired a series of warning shots at the roof to give people time to leave the building before it was destroyed. There were no immediate reports of casualties.

At midday, an airstrike hit a building in central Gaza City, sending terrified residents running into the street, including women and barefoot children. The Islamic Jihad militant group confirmed that the strike killed three of its commanders.

Another strike hit a high-rise as people were conducting dawn prayers, killing a woman, her 19-year-old disabled son and another man, residents said. Health officials confirmed the deaths.

The Gaza Health Ministry said 28 people, including 10 children and the woman, have been killed and 152 wounded. Ashraf al-Kidra, a spokesman for the ministry, said Israel’s “relentless assault” was overwhelming the health care system, which has been struggling with a COVID-19 outbreak.

The escalation comes at a time of political limbo in Israel.

Netanyahu has been caretaker prime minister since an inconclusive parliamentary election in March. He failed to form a coalition government with his hard-line and ultra-Orthodox allies, and the task was handed to his political rivals last week.

One of those rivals is Israel’s defense minister, who is overseeing the Gaza campaign. It was not clear whether the political atmosphere was spilling over into military decision-making, though the rival camps have unanimously expressed support for striking Hamas hard.

The support of an Arab-backed party with Islamist roots is key for the anti-Netanyahu bloc. But the current tensions might deter the party’s leader, Mansour Abbas, from joining a coalition for now. The sides have three more weeks to reach a deal.

The current violence in Jerusalem coincided with the start of the Muslim fasting month of Ramadan in mid-April.

Critics say heavy-handed police measures helped stoke nightly unrest, including a decision to temporarily seal off a popular gathering spot where Palestinian residents would meet after evening prayers. Another flashpoint was the east Jerusalem neighborhood of Sheikh Jarrah, where dozens of Palestinians are under threat of eviction by Jewish settlers.

Over the weekend, confrontations erupted at the Al-Aqsa Mosque compound, which is the third holiest site of Islam and the holiest site in Judaism.

On Monday evening, Hamas began firing rockets from Gaza. From there on, the escalation was rapid.

Gaza militants fired more than 500 rockets at Israel, with about one-third falling short and landing in Gaza, Conricus said.

At midday, a barrage of some 10 rockets whizzed above the southern city of Ashdod, filling the skies with streaks of white smoke.

The military hit 130 targets in Gaza, including two tunnels militants were digging under the border with Israel, Conricus said. He did not address Gaza Health Ministry reports about the dead children.

In Gaza, most of the deaths were attributed to airstrikes. However, seven of the deaths were members of a single family, including three children, who died in an explosion in the northern Gaza town of Beit Hanoun. It was not clear if the blast was caused by an Israeli airstrike or errant rocket.

Dozens of mourners took part in the funeral of Hussein Hamad, an 11-year-old boy who was among the dead.

Israel struck scores of Gaza homes in its 2014 war with Hamas, arguing it was aiming at militants, but also killing many civilians. The practice drew broad international condemnation at the time. Israel’s latest tactics in Jerusalem have drawn angry reactions from leaders from the Arab and Muslim world.