Killing of 13 officers in Michoacan on Monday was followed by another shooting on Tuesday in Guerrero that left 15 dead.

President Andres Manuel Lopez Obrador has defended his strategy for fighting the violent crime racking Mexico, after the killing of 13 police officers in an ambush claimed by a powerful drug cartel in the western state of Michoacan.

In a separate incident in Guerrero state late on Tuesday, one soldier and 14 civilians were killed in a shoot-out between the military and suspected organised crime.

In Michoacan, grieving relatives of the officers directed their anger at the government and police commanders they believe sent their loved ones to a certain death.

“The good ones are here,” said the brother of slain officer Marco Antonio González, gesturing at the huge funeral hall.

“And those responsible for this, they are also here,” the brother said just as the Michoacan state police chief and his top brass got out of their cars.

The man and other relatives refused to give their names for fear of reprisals in this western Mexico state where violence blamed on drug gangs has jumped in recent months.

A memorial service later in the day was an angry, raw-nerved affair.

Only eight coffins were present – mourners said the five other families refused to participate because they were so angry their sons and brothers had been sent on the mission.

“Like sheep to the slaughter!” some shouted at Gov Silvano Aureoles.

More than 30 suspected cartel gunmen waylaid the police officers in the town of El Aguaje on Monday as they were travelling in a convoy to serve a warrant. Nine officers were also wounded in the worst attack on Mexican law enforcement in years.

According to reports, the attackers claimed to be from the Jalisco New Generation Cartel, a new group that is seeking to replace the Sinaloa cartel of Joaquin ‘El Chapo’ Guzman, who is now serving a life sentence in the US.

Lopez Obrador called the attack “regrettable,” but said he remains committed to his security approach emphasising tackling underlying social problems, even though national homicide figures have been setting all-time highs. 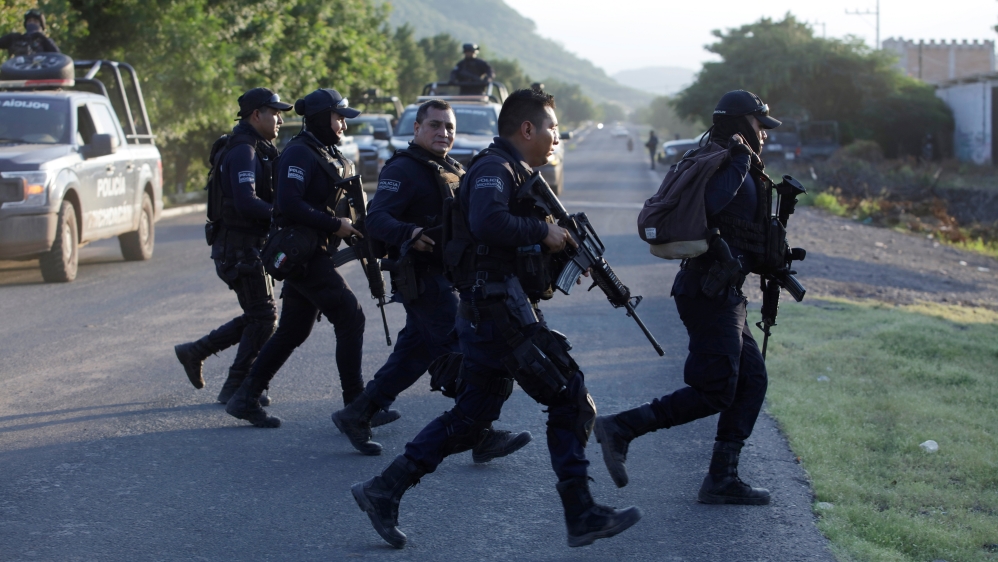 “We are going to continue with our strategy,” Lopez Obrador said on Tuesday.

“For us, it is very important for there to be well-being, that peace with justice can be achieved … and also avoiding that authorities mix with crime.”

Like Michoacan, Guerrero is also known for violence linked to organised crime and the army has been targeted on other occasions.

Alvarez Heredia said that the latest confrontation in Iguala town began after authorities received a call alerting them about the presence of armed people in neighbouring Tepochica.

“Armed civilians initiated an assault on elements of the National Defence Secretariat, resulting in the death of a soldier and of 14 armed civilians,” he said in the statement.

Authorities later seized “high-power weapons” as well as three vehicles which had been reported stolen.

In Iguala, where the firefight took place, a turf war is raging between several criminal organisations. The area is part of a major corridor for the trafficking of heroin and marijuana.

In Iguala, 43 students disappeared five years ago after police handed them over to the Guerreros Unidos crime syndicate, which mistook them for members of a rival gang, killed them and burned their bodies.

There were nearly 36,000 murders in Mexico last year, with the high rate of violence in large part down to gangs.

UAE restructures govt, seeking more agility as it deals with…

Cracks in the Trump-Europe relationship are turning into a…

Jul 5, 2020 3,573
Subscribe to our newsletter
Sign up here to get the latest news, updates and special offers delivered directly to your inbox.
You can unsubscribe at any time