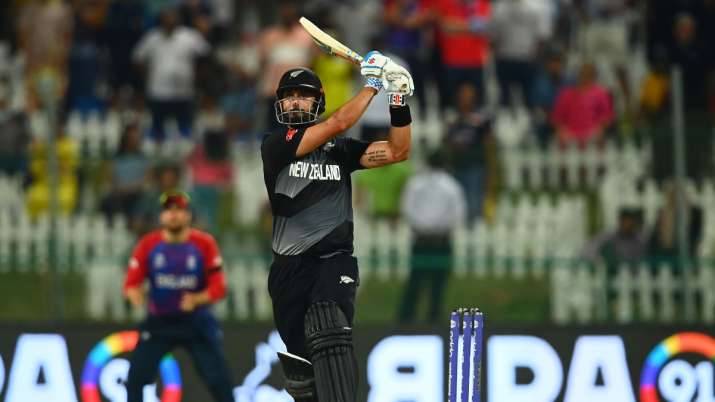 The Black Caps chased down a 167-run target by losing five wickets in the 19th over the T20 World Cup semi-final played at Sheikh Zayed Cricket Stadium, Abu Dhabi.

Chasing the target, New Zealand were in trouble at 13-2 and 107-4 when Jimmy Neesham hit an 11-ball 27 and Mitchell finished it off with a boundary.

Daryl Michell won the Player of the Match award for his brilliant match-winning knock. New Zealand will face either Australia or Pakistan in T20 World Cup final.

Pakistan will face Australia in the second semi-final on Thursday.

Batting first, England have set a 167-run target for New Zealand in the first semi-final of the T20 World Cup in Abu Dhabi.

England, electing to bat, finished at 166 at the loss of four wickets in their 20 overs thanks to a half-century by batter Moeen Ali.

The all-rounder played an unbeaten knock of 51 from 37 deliveries with three fours and two sixes to his name.

Dawid Malan hit four boundaries and a six to his name.

As far as New Zealand’s bowling was concerned, Tim Southee along with Adam Milne, Ish Sodh and James Neesham took a wicket each.