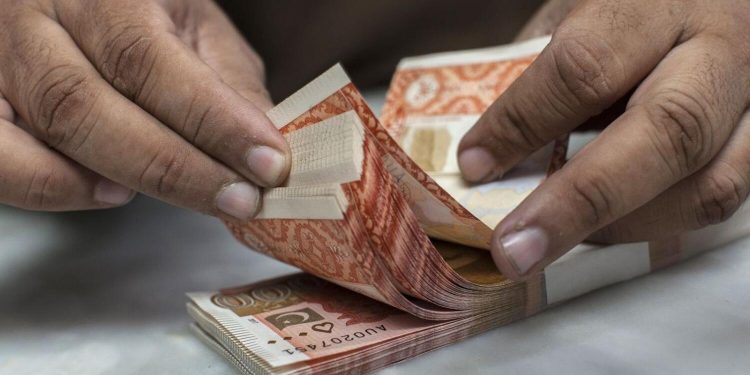 Default on $130 billion external liabilities not on the cards, but experts call for ‘economic emergency’

Pakistan economy is facing serious challenges in the wake of shrinking foreign exchange reserves, depreciating rupee and increasing inflation but default on $130 billion external liabilities is not on the cards, experts say.

Analysts, economists and former finance ministers said Pakistan’s economy will survive ‘regime-change’ shock and remain on sustainable growth path in line with the reforms agenda set by the International Monetary Fund (IMF). However, they said the government should expedite its efforts to ensure foreign currency inflows from multinational lenders or friendly countries, otherwise it will have no option but to impose ‘an economic emergency’ and withdraw subsidies on electricity, gas and fuel to bring stability in the key economic indicators.

“Pakistan economy is passing through a tough phase and it will overcome the existing challenges soon. We are confident to fulfil all our commitments on external liabilities and default is not an option for us,” according to an official at Pakistan’s Finance Ministry in Islamabad.

“Pakistan can and will manage its commitments and there won’t be any risk of default (InShaAllah),” Dar told Khaleej Times on Monday.

Pakistan’s foreign exchange reserves dropped to $16.55 billion on April 30. It includes $10.49 billion reserves held by State Bank of Pakistan (SBP) while $6.05 billion held by commercial banks, according to the latest data released by the central bank.

The reserves held by SBP have dropped by around $7 billion, or 40 per cent, approximately over the past four months. The central bank reserves hit an all-time high at $20.14 billion in August 2021, according to the central bank’s data.

The rupee, which has come under renewed pressure due to a rebound in the international crude oil prices to over $110 a barrel, has also hit record lows against the US dollar and other major currencies in inter-bank and open markets recently. It shed another 0.5 per cent against the greenback in inter-bank market on Friday and closed at 186.63.

Inflation also increased to 13.4 per cent and it will go higher as full impact of food inflation, driven by international wheat and edible oil prices, is yet to be transmitted to store shelves. The situation may further aggravate when cap on fuel prices and electricity tariffs will be removed in coming days.

“We have laid a solid foundation for Pakistan’s economy by expanding the tax base and generating the highest ever revenues in the country’s history. We will not default as exports and remittances are also touching record levels,” former finance minister Shaukat Tarin told Khaleej Times.

In reply to a question, he said fresh elections are the only way to bring economic stability to the country.

“We should go for fresh elections as early as possible to clear uncertainty on political and economic fronts,” he said.

In reply to a question, he said the government should take appropriate steps to roll over Chinese loans and urged the IMF to release $1 billion tranche after the successful seventh review as “we already met the fund’s target in March”.

“We should also speed up efforts to get disbursement of World Bank and Asian Development Bank’s loans. Moreover, there is a need to cut luxury imports worth $1.5 billion every month to balance the current account deficit,” Tarin said.

“We must ensure that export momentum should continue to achieve sustainable economic growth. The government should revive channels to get Russian wheat and gas on 30 per cent to 40 per cent discounts to ease pressure on the rupee and foreign exchange reserves,” he added.

“Pakistan has never defaulted and always secure funding. But with the regime change, the new govt has failed to secure funding from the IMF and friendly countries,” Aslam told Khaleej Times.

He said the situation has further escalated when China has put hold on rollover of $2.4 billion and rumours of Saudis have recalled their $3 billion deposits in SBP.

“I think the current government is struggling with legitimacy issues. Both international lenders and overseas Pakistanis are not sure how long this current setup will last. The only solution to end this uncertainty is through conducting fresh elections,” he said.

“Any drawdown in RDA or slowdown in remittances will create a very vulnerable situation for the country,” he said.

“Let’s hope, we will not face that situation. If God forbid, the funding will not be secured then economic emergency needs to be imposed to have a strict check on luxury and unnecessary imports,” he added.

No room for default

Samiullah Tariq, head of research at Pakistan Kuwait Investment, rules out chances of default but recommends strong measures to bring ‘economic discipline’ in the policy measures.

“In my view there is no chance of default. But we need to adopt some measures to avoid this situation,” Tariq told Khaleej Times.

Suggesting immediate measures, he said Pakistan should restore the IMF programme, withdraw an amnesty scheme and eliminate all subsidies on fuel and electricity. He said the government should ensure adequate level of foreign exchange reserves to give confidence to market. Moreover, the country should have an adequate level of stocks of petrol, diesel and furnace oil to ensure uninterrupted electricity supply in summer months.

Under the medium-term policy action, the government should focus on improving agricultural production, export-oriented industries, energy and manufacturing sector.

“Pakistan has been importing wheat and cotton and we need to be self-sufficient in agriculture products. Energy sector efficiency is a must to reduce circular debt and take steps to privatise power distribution companies,” he said.

“We need to sustain growth trend in exports by exploring new markets and diversify our products portfolio to fetch more dollars. Please remember economic growth would only be sustainable if exchange rate is market driven, else it’s going to create problems for balance of payments,” he added.

Dr Qais Aslam, Professor of Economics at Lahore-based University of Central Punjab, said there is no chance of default on external liabilities.

“The IMF will not allow Pakistan to default but we need to take serious measures to avert the crisis-like situation,” he said.

Elaborating, he said the government should evolve a solid policy and implement short-term and long-term measures forthwith to control the economic damage.

“Under short-term solutions, we need to restrict imports of all unnecessary items for six months and allow SMEs to export without export duty extensively and attract foreign remittances more aggressively,” he said.

“Under the long-term policy measures, we need to educate our children in productive, scientific behaviours that induce export-orientated business and produce electricity with indigenous resources. In addition, the government should promote electric busses to reduce dependency on foreign oil,” he added.

In reply to a question, Dr Qais Aslam said raising funds through international debt market is not an option for Pakistan.

“No, Pakistan lacks credibility and it will not be able to raise funds at good price. It will attract more expensive funds from open market. The only hope is rescheduling foreign liabilities with diplomatic efforts,” he said.

Tariq echoed the similar views and said approaching commercial markets to raise funds is not a viable option for Pakistan at the moment.

“I think at this point it would be expensive to access global capital markets due to higher yields on existing bonds and increasing interest rates globally,” he said.