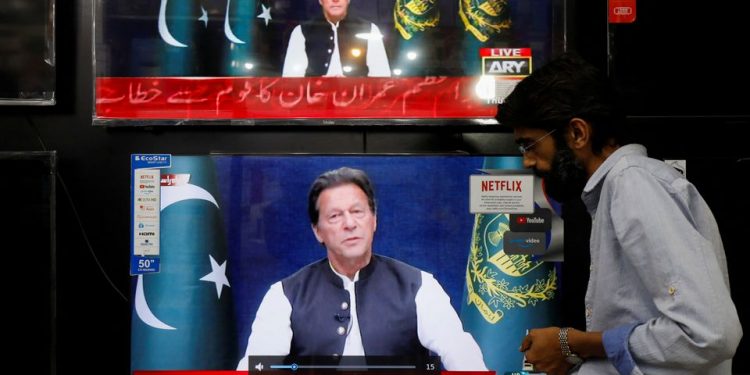 ISLAMABAD – Pakistani Prime Minister Imran Khan’s career was at stake on Sunday as he faced a difficult vote to oust him, potentially leading to fresh political instability in the nuclear-armed country of 220 million people.

A united opposition has tabled a no-confidence motion against Khan for a parliamentary session starting at 11:30 a.m. (0630 GMT). If they remain united, Khan is set to fall below the 172 votes needed to survive the no-confidence vote.

On the streets of the capital Islamabad, there was a heavy police and paramilitary presence, with shipping containers used to block off roads, according to a Reuters witness.

The opposition blames Khan for failing to revive the economy and crackdown on corruption. He says, without citing evidence, that the move to oust him has been orchestrated by the United States, a claim Washington denies.

The opposition and analysts say, Khan, who rose to power in 2018 riding on the powerful military’s support, has fallen out with it, a charge he and the military denied.

No prime minister has finished a full five-year term since independence from Britain in 1947, and generals on several occasions have ruled the country, which is perennially at odds with fellow nuclear-armed neighbour India.

In addition to an economic crisis, with Islamabad seeking help from the International Monetary Fund, Pakistan faces challenges including an attempt to balance global pressure to prod the Taliban in neighbouring Afghanistan to meet human rights commitments while trying to limit instability there.

Khan lost his majority in parliament after allies quit his coalition government and a spate of defections within his ruling party, Pakistan Tehreek-e-Insaf (PTI).

Pakistan’s most popular English language newspaper, Dawn, has said Khan is “as good as gone”, but the former cricket champion has urged his supporters to take to the streets on Sunday ahead of the vote, and has indicated that he would not accept an unfavourable vote.

“How can I accept the result when the entire process is discredited?” Khan told foreign journalists at his office on Saturday. “Democracy functions on moral authority – what moral authority is left after this connivance?”

“The move to oust me is blatant interference in domestic politics by the United States,” he said, terming it an attempt at “regime change”.

Bilawal Bhutto Zardari, head of the opposition Pakistan People’s Party (PPP), said on Saturday night that Khan would attempt to hold on to power despite losing his majority. “We fear the prime minister is up to some unconstitutional measures to save his seat.”