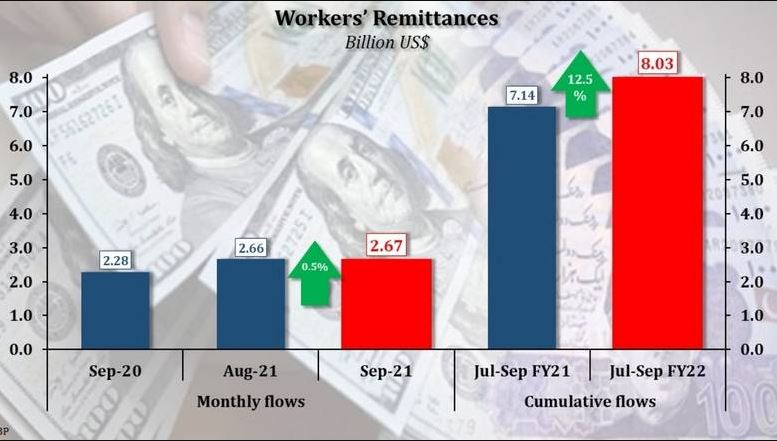 Dubai News : Pakistan received $8.04 billion remittances from its over nine million overseas workers during the first quarter ending September 30, which put the country on the track to achieve a record $32 billion remittances inflows in the current fiscal 2021-22.

The State Bank of Pakistan (SBP) data revealed that during July-September quarter non-resident Pakistanis sent 12.5 per cent more money back home during the same period last year. During the last 75 years, this quantum of quarterly remittances has been the highest in Pakistan’s 75 years of history.

Financial analysts say that given the first-quarter trend, Pakistan is bound to achieve the target of $32 billion remittances during the current financial year, which will ease out the external pressure on balance of payment.

Major share of these remittances was from the overseas Pakistanis living in the UAE and Saudi Arabia, which was $1.55 billion and $2.03 billion respectively. The remittance outflows from the UAE to Pakistan climbed to nine per cent year-on-year basis while Saudi Arabia registered a slight decline of three per cent during the quarter.

Likewise, remittances from the US and UK rose 32 per cent ($833 million) and 13 per cent ($1.12 billion) respectively while the first-quarter inflows from the European Union surged 48 per cent to $889 million from $601 million during the same period last year.

The State Bank of Pakistan said that proactive policy measures to incentivize the use of formal channels, curtailed cross-border travel in the face of COVID-19, altruistic transfers to Pakistan amid the pandemic and orderly foreign exchange market conditions contributed towards the sustained improvement in remittance inflows since last year.

It is pertinent to mention here that Pakistan’s economy has received much-needed boost through upward trend of remittance since June 2020, which remained above $2 billion. The SBP says that it is seventh consecutive month that inflows were around $2.7 billion on average.

The central bank data shows that 248,723 accounts have been opened from 175 countries during the 13-month period.