Rihanna creates flutter in India with tweet on farmer protests

Pop superstar Rihanna has created a flutter in India by wading into the months-long protests by Indian farmers against new farm laws passed by Prime Minister Narendra Modi’s government, which has slammed international celebrities for their “inaccurate” comments.

Tens of thousands of young and old farmers have blocked roads leading into New Delhi for more than two months, sheltering in tractors from the cold, to demand the repeal of three laws passed in September last year, which farmers say will destroy their livelihoods by bringing India’s vast agricultural sector under corporate control. A tractor rally by farmers last week in New Delhi turned violent, killing one and wounding hundreds, including police officers.

Police responded by shutting down the internet, digging ditches, driving nails into roads and topping barricades with razor wire to prevent farmers from entering the capital again. 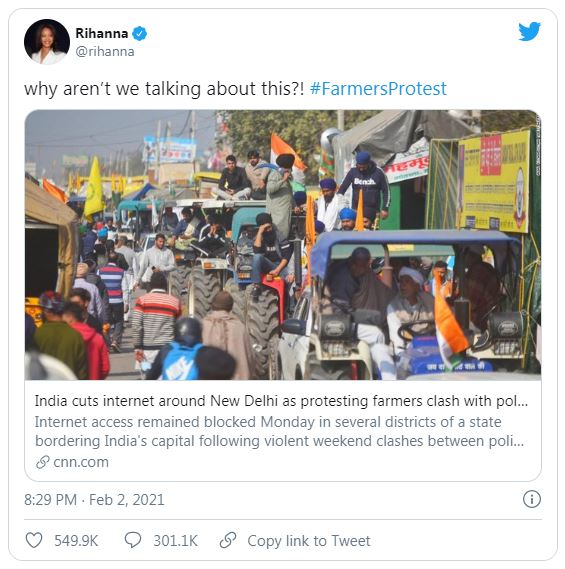 “Why aren’t we talking about this?!” Rihanna said in a Twitter post, sharing a CNN network’s article on the demonstrations with her 100.9 million followers on the platform, using the hashtag #FarmersProtest.

It was not immediately clear what led Rihanna, whose songs have done well in India, to suddenly tweet on the subject.

“We stand in solidarity with the #FarmersProtest in India,” Thunberg tweeted to her 4.6 million followers. 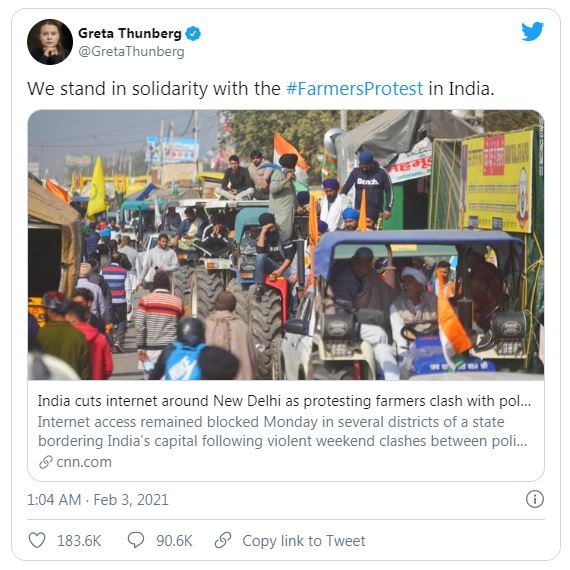 Human Rights Watch also tweeted Rihanna, saying the government of Prime Minister Modi is “presiding over a dangerous regression in free speech rights in pursuit of its Hindu nationalist agenda”.

“Increasingly in Modi’s India, independent institutions including investigators, prosecutors, and the courts, which should be impartially defending rights, are instead protecting government supporters and targeting its critics,” the rights group said in a statement on Tuesday.

“Indian authorities should be releasing activists and others already jailed or facing criminal charges in politically motivated cases, not adding to that list” ~ @mg2411 https://t.co/OyiTBUjNz2 #FarmersProtest https://t.co/4hRqEISrML

Also to tweet her solidarity with the protesting Indian farmers was American lawyer and author Meena Harris, who is also the niece of US Vice President Kamala Harris.

“It’s no coincidence that the world’s oldest democracy was attacked not even a month ago, and as we speak, the most populous democracy is under assault. This is related. We ALL should be outraged by India’s internet shutdowns and paramilitary violence against farmer protesters,” the 36-year-old tweeted, with a photo of women protesters.

It’s no coincidence that the world’s oldest democracy was attacked not even a month ago, and as we speak, the most populous democracy is under assault. This is related. We ALL should be outraged by India’s internet shutdowns and paramilitary violence against farmer protesters. https://t.co/yIvCWYQDD1 pic.twitter.com/DxWWhkemxW

India on Wednesday criticised the international celebrities for making comments in support of protesting farmers as inaccurate and irresponsible and said vested interest groups were trying to build opinion against the country.

“Before rushing to comment on such matters, we would urge that the facts be ascertained, and a proper understanding of the issues at hand be undertaken,” the Indian foreign ministry said.

“The temptation of sensationalist social media hashtags and comments, especially when resorted to by celebrities and others, is neither accurate nor responsible.”

As Rihanna trended on Twitter in India, a Mumbai-based actress who backs India’s ruling nationalist Bharatiya Janata Party (BJP) also lashed out at the famous singer.

“No one is talking about it because they are not farmers, they are terrorists who are trying to divide India …” Kangana Ranaut told her three million followers on the same platform.

The months-long protests are led by turban-wearing Sikh farmers from the wheat and rice-growing state of Punjab in India’s north.

The close-knit community, which is spread around the world, has also organised protests in Australia, Britain and the US.

“For over a week, the Indian government has been suspending internet services around #FarmersProtest sites in a clear affront to the freedom of speech,” it said on Twitter.