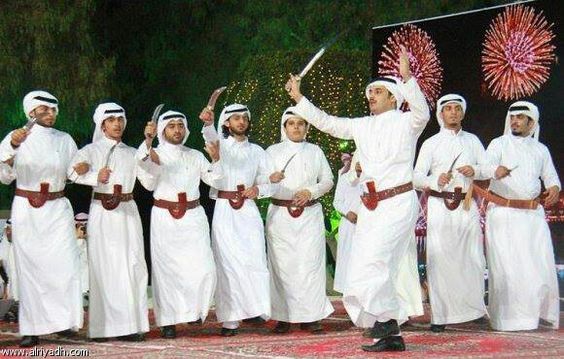 DUBAI – Saudi Arabia’s diverse regions and folklore are being represented by vibrant dance and musical performances at Expo 2020 Dubai.

The Saudi Signature Performance Group is presenting unique displays of amazing costumes and beautiful music, songs, and chants at the Saudi Pavilion that are set to showcase the country’s history and culture to a global audience at Expo 2020 Dubai.

Throughout the day, the Saudi Signature Performance Group presents four different dances, called Ardah, from various parts of the Kingdom. Men line up in two rows facing each other or in a circle while they each carry a sword. They are also accompanied by drums and sometimes by a singer or poet.

The group starts the day with the Ardah Al-Najdiyah, which has its roots in the country’s central area called Najd and is considered to be Saudi Arabia’s national dance.

The second performance is of the Al Khubaiti dance, especially prevalent in the city of Jeddah and includes distinctive turns and drops by the dancers.

For their third display, the dancers showcase the Al Liwa dance, inspired by African dances that were able to influence the Arabian peninsula through Oman.

The Al Azzawi dance is the fourth dance to be performed and is the most popular dance in Jizan, which is located in the country’s southwest corner directly north of the border of Yemen. It is often performed by young men because it requires a lot of jumping.

The group ends the night with another performance of the Ardah Al-Najdiyah. The performances take place nightly at the Saudi Arabia Pavilion, located in the Opportunity District, at 1900, 1940, 2020, 2100, and 2140.

The Saudi Arabia Pavilion offers a glimpse into the future, taking visitors on a journey through the country’s ambitions across four main pillars: people, nature, heritage and opportunities. It is second largest pavilion, after the United Arab Emirates, at Expo 2020 Dubai with a total area of 13,059 square metres.