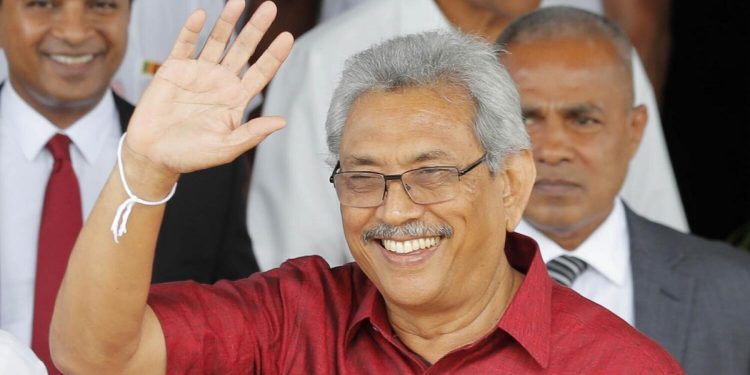 Sri Lankan presidential candidate and former defense chief Gotabaya Rajapaksa waves to media as he leaves the election commission his supporters after filing his nomination in Colombo, Sri Lanka, Monday, Oct. 7, 2019. A record 35 candidates filed nominations Monday for next monthÕs Sri Lankan presidential election, but the incumbent has opted not to seek a second term with the entry of Rajapaksa, who is considered the favorite. (AP Photo/Eranga Jayawardena)

Sri Lankan President Gotabaya Rajapaksa on Wednesday promised to bring in a new unity government soon and to abolish the executive presidency once stability is restored to the crisis-riven island-nation.

In a bid to appease angry protesters and to avoid more bloodbath, the president said in an evening address to the nation: “I am taking measures to form a new government, with a prime minister who has the majority confidence of parliament and ministers who could gain the confidence of the nation.”

This came after new central bank governor P Nandalal Weerasinghe, who the islanders look up to to salvage the nation from a deep economic crisis, threatened to resign “if no government is established within the next two days”, and opposition parties failed to decide on a consensus candidate for the top post.

Two days after his brother Mahinda Rajapaksa resigned as prime minister following violent protests to oust the ruling Rajapaksas, the president said he will abolish the executive presidency that gives the head of state sweeping powers, including the power to declare war and dissolve parliament.

The public and opposition leaders have long been demanding the abolition of the executive presidency, which the current president and his brother Mahinda, former president for 10 years, have refused. It is said that much of the alleged corruption by the Rajapaksas that has led the island nation to the present economic and energy crises and near bankruptcy, stems from their executive powers.

“I have been working with all party leaders to form a new interim government and amend the constitution after reaching stability,” said the president, following three days of violence that saw eight dead and over 100 properties burnt and destroyed.

However, sources said leaders of political parties and the president on Wednesday failed to reach an agreement on a new leader. “The issue if far from solved,” the sources said as the public continued flout an island-wide curfew and emergency laws.

They told Khaleej Times that Karu Jayasuriya, former speaker and minister who was tipped off to be appointed as prime minister, may not be a contender after all.

According to insiders, Ranil Wickremesinghe, a five-time former prime minister, also member of the main opposition United National Party, is in private talks with the president to become prime minister.

Sajith Premadasa, who lost to Rajapaksa in the last presidential elections, said he will undertake the position only if four of his conditions are met — the resignation of the president topping the list.

The conditions also include that the president never interferes with the new government until he quits; general elections be held after economic stability is reached, and the executive presidency be abolished.

However, sources close to the president said that he is not willing to step down despite continued public protests by the Sinhalese majority who voted him in, demanding his resignation.

On Monday, then Prime Minister Mahinda Rajapaksa gave in to public demands and resigned after a wave of politically motivated deadly violence backlashed on him.

He had to be evacuated from his home in a rescue operation as angry protestors stormed into the premises.