The enormous container ship blocking Egypt’s Suez Canal has been fully floated, Suez authorities say, while cautioning that it could take several days to clear the traffic jams at both sides of the canal. The giant container ship that blocked the Suez Canal for almost a week was fully floated on Monday and traffic in the waterway resumed.

According to witnesses, the Ever Given container ship was moving and a shipping tracker and Egyptian TV showed it positioned in the centre of the canal.

Helped by the peak of high tide, a flotilla of tugboats managed to wrench the bulbous bow of the skyscraper-sized vessel from the canal’s sandy bank.

Earlier in the day, Egypt’s Suez Canal Authority (SCA) said the Ever Given container ship was partially refloated and turned in the “right direction”.

The news comes a week after the container ship ran aground in high winds, blocking one of the world’s busiest shipping lanes.

Some 400 ships, include oil tankers and vessels carrying goods to consumers that had been stuck in the canal, leaving them with millions in expenses.

Here are the latest developments:

The owners and charterers of ships unable to sail through the the Suez Canal for nearly a week face at least $24 million in expenses they will be unable to recoup as their insurance policies do not cover them, industry sources say.

Up to 400 ships, which include oil tankers and vessels carrying goods to consumers that had been stuck.

According to Reuters news agency, shipping sources said daily expenses were estimated to reach between $10,000 to $15,000 a day for each vessel and it would have to be written off. This includes oil tankers.

Port of Duqm ready to provide storage options, transhipment and bunkering solution for Containers, RORO units and any vessel types looking for a new safe haven in the Middle East
…

Please don’t hesitate to contact us at [email protected] pic.twitter.com/4rIaerhAxo

An expert in maritime salvage said that the Suez Canal could see north-bound traffic resuming as early as Tuesday, after a container ship that had blocked the waterway for nearly a week came free.

Captain Nick Sloane, an maritime salvage expert who is vice president of the International Salvage Union and who led the high-profile effort to salvage the shipwrecked cruise ship Costa Concordia in 2012, said that both the Ever Given and the canal’s banks and seabed will need to be inspected thoroughly.

But if the deep part of the canal looks to be in good shape, he said traffic could resume as early as Tuesday morning.

A US maritime expert said the salvage team did an “excellent job” freeing the trapped container ship, as there was real risk of cracking in the centre of the vessel.

Captain John Konrad, CEO of shipping website gcaptain.com told The Associated Press news agency it was “a great team of salvors that that made it work, made the impossible work”.

“We were in a real critical situation when it was touching on both banks and there was real risk of cracking in the centre of the ship,” he said.

“But the game entirely changed once they got that stern free and were able to pivot it, pivot it back parallel to the canal.”

Joy, celebrations as Ever Given refloated

The opening of the Suez Canal to traffic has sparked relief, with tugboat crews sounding their foghorns in celebration.

The Suez Canal Authority has cautioned, however, that it will take more than three days to clear the traffic jams of ships that were stuck at the northern and southern ends of the canal. 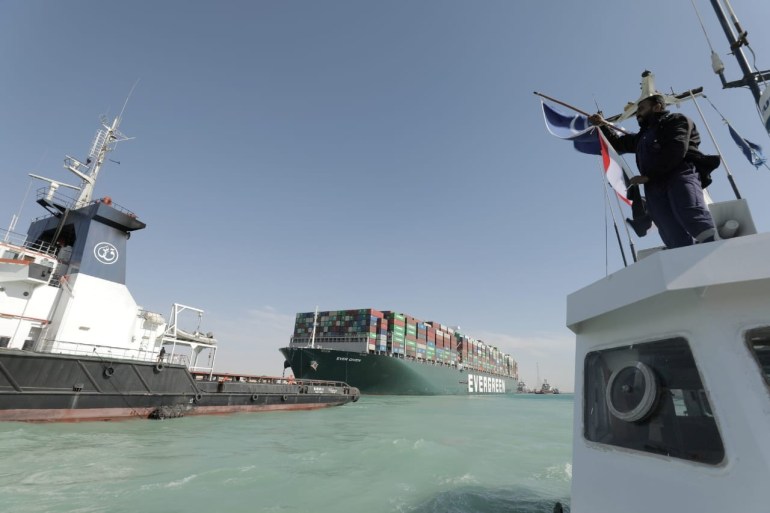 Over 400 ships waiting to pass through Suez Canal – local media

More than 400 ships were waiting to pass through the Suez Canal as the container ship that had been blocking the waterway was refloated, Egypt’s Nile TV reported.

Ship to be inspected for seaworthiness after refloat

Evergreen Line said the Ever Given container ship would be inspected for seaworthiness after being dislodged from a southern section of the Suez Canal where it had been blocking traffic for nearly a week.

Taiwan-listed Evergreen, which is leasing the ship, said decisions regarding the vessel’s cargo would be made after the inspection and that it would coordinate with the ship’s owner after investigation reports were completed.

The giant container ship that blocked the Suez Canal for almost a week was fully floated on Monday and traffic in the waterway would resume, the canal authority said in a statement.

A shipping tracker and Egyptian TV showed it positioned in the centre of the canal.

“Admiral Osama Rabie, head of the Suez Canal Authority, has announced the resumption of shipping traffic in the Suez Canal,” the SCA said in a statement, shortly after shipping sites showed the vessel had once more diagonally blocked the waterway.

Benchmark copper on the London Metal Exchange traded down 0.3 percent to $8,937 a tonne in official rings. Prices are down seven percent since hitting 9-1/2-year highs of $9,617 last month.

The blocking of the Suez Canal by one of the world’s largest container ships is likely to result in losses worth hundreds of millions of euros for the reinsurance industry, Fitch Ratings said, even as rescue teams were successful in partially refloating the vessel on Monday.

The 400-metre (1,312-foot) long Ever Given got wedged diagonally across the canal in high winds early last Tuesday, blocking the path for hundreds of vessels waiting to transit the shortest shipping route between Europe and Asia.

This event will reduce global reinsurers’ earnings but should not materially affect their credit profiles, while prices for marine reinsurance will rise further, the credit rating agency said.

The head of a Dutch salvage firm helping shift a container ship from the Suez Canal warned that “the challenge is still ahead” despite some success in moving it, as the bow remains stuck.

“The good news is that the stern is free but in our view that was the easier part. The challenge is still ahead, because you really have to slide the ship, with the weight it is carrying,” Boskalis chief executive Peter Berdowski told Dutch public radio.

Once the container ship blocking the Suez Canal is refloated it will take three and a half days to clear a traffic jam of hundreds of vessels, Egyptian authorities.

“The canal will be functioning 24 hours per day immediately after the ship has been refloated,” Suez Canal Authority chief Osama Rabie told Egyptian TV. It will then take “around three and a half days” to clear the backlog, he said.

Egypt’s President Abdel Fattah el-Sisi said that Egyptians had succeeded in ending the crisis of the container ship stranded in the Suez Canal.

“And by restoring matters to their normal course, with Egyptian hands, the whole world can be assured of the path of its goods and needs that are carried through this navigational artery,” Sisi said on his official social media pages.

The stranding of Ever Given has created disruptions in the global shipping industry that could take weeks and possibly months to clear, shipping group Maersk said.

“Even when the canal gets reopened, the ripple effects on global capacity and equipment are significant,” the world’s largest container shipping company said in an advisory statement for its customers.

Maersk has three vessels stuck in the canal and another 29 waiting to enter, it said, adding that it had so far rerouted 15 vessels to sail south of Africa instead. “Assessing the current backlog of vessels, it could take six days or more for the complete queue to pass,” it said.

Some 400 ships are waiting to go through Suez Canal

Osama Rabie told local media that the Suez Canal will operate for 24 hours after the issue is resolved, without specifying a timeline for it. 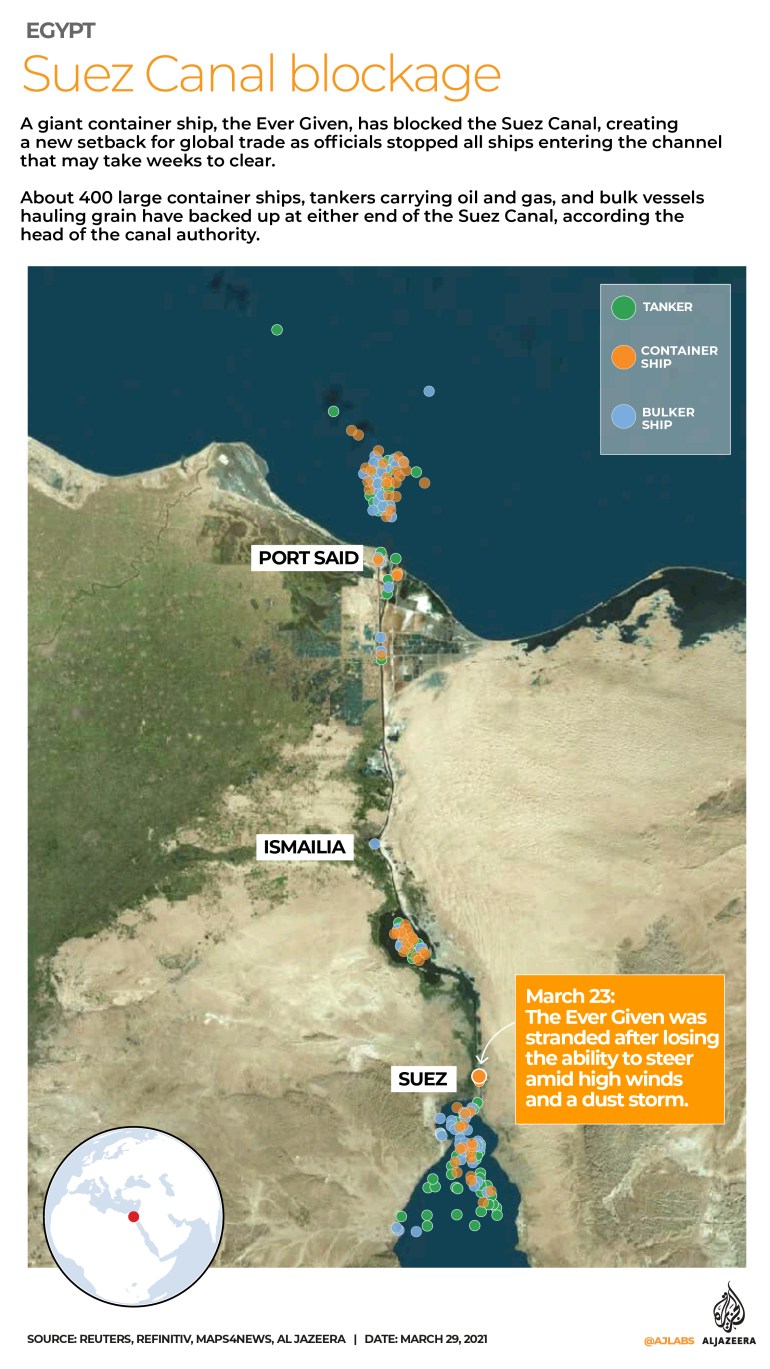 The Syrian government started rationing the distribution of fuel in the country amid concerns that shipments could be delayed because Egypt’s Suez Canal is being blocked by a giant cargo ship that ran aground, according to the oil ministry.

The blockage has held up a ship that was carrying fuel and oil products from Iran, an ally of the Syrian government, the Syrian oil ministry said.

Pending a resolution, “the ministry is rationing the distribution of available oil products” to ensure the continuity of essential services, such as bakeries and hospitals, the ministry statement said.

News about the partial refloating of the giant container ship that was stuck in the Suez Canal is good, but completing the operation would not be a “piece of cake”, Boskalis CEO Peter Berdowski told Dutch public radio on Monday.

Boskalis is the parent company of Smit Salvage, which has assisted in efforts to dislodge the ship.

A new tug would arrive and water would be injected under the ship’s bow to help free it, but if those efforts did not work containers might have to be removed, Berdowski said.

Videos posted on social media appeared to show the stern of the container ship that had been stuck in the Suez Canal swung towards the canal bank, opening space in the channel.

One of the videos showed tug boats moving around the Ever Given container ship and voices could be heard shouting in celebration.

#BREAKING| Ever Given was successfully re-floated

at 4.30 am local time and was being secured at the moment, Inchcape, a global provider of marine services said on Twitter __ REUTERS#Egypt #Suez #SuezCanal #EVERGIVEN #Evergreen #BreakingNews|#قناة_السويس #السفينة_الجائحة #عاجل pic.twitter.com/HxFAW2LUzw

Oil slumped more than 2 percent after news from the Suez Canal that salvage crews have managed to move the giant container ship that has been clogging up the vital global trade passage for nearly a week. 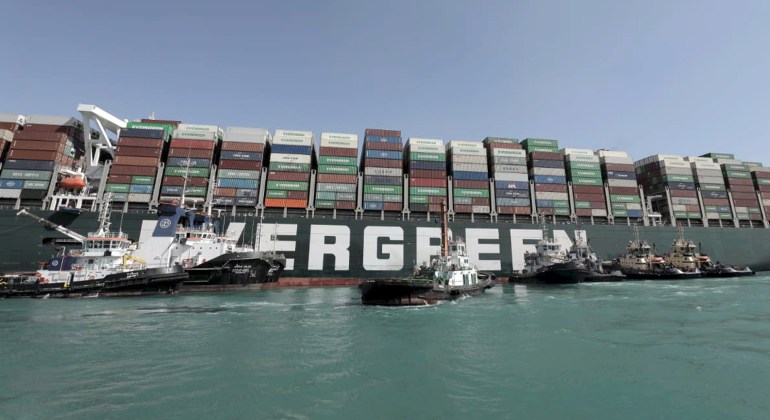 A handout photograph made available by the Suez Canal Authority shows tugboats neat the Ever Given container ship [File: Reuters]

After further dredging and excavation over the weekend, efforts by rescue workers from the authority and a team from Dutch firm Smit Salvage worked to free the ship using tug boats in the early hours of Monday, two marine and shipping sources told the Reuters news agency.

The authority said Ever Given has been straightened in the canal and further tugging operations would resume once the tide rises later on Monday.

Myanmar forces kill over 100 in deadliest day since coup