Trump has long seen previous US trade agreements as losers


WASHINGTON (AP) — President Donald Trump’s combative approach to trade has been one of the main constants among his often-shifting political views. And he’s showing no signs of backing off now, even as the stakes intensify with the threat of a full-blown trade war between the world’s two biggest economies.

The president went after China on Day 1 of his presidential bid, promising to “bring back our jobs from China, from Mexico, from Japan, from so many places.”

Trump’s views on trade helped forge his path to victory in states such as Pennsylvania, Michigan, Wisconsin and Ohio, where he linked the loss of manufacturing jobs to the North America Free Trade Agreement and other trade deals. He warned the worst was yet to come with President Barack Obama’s proposed Trans-Pacific Partnership.

His trashing of existing and proposed trade agreements grabbed the headlines, but he also made clear his view that globalization had been bad for America and that he would use tariffs to protect national security and domestic producers. He cited the nation’s Founding Fathers, Abraham Lincoln and Ronald Reagan as leaders whose footsteps he was following when it came to trade and tariffs. 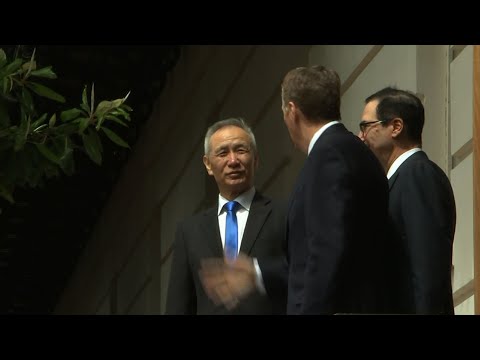 “Our original Constitution did not even have an income tax,” Trump told voters in Monessen, Pennsylvania, some four months before the 2016 presidential election. “Instead, it had tariffs, emphasizing taxation of foreign, not domestic production.”

No. 7 on his list of trade promises in that speech: taking on China for “its theft of American trade secrets.”

“This is so easy. I love saying this. I will use every lawful presidential power to remedy trade disputes, including the application of tariffs consistent” with existing trade laws, Trump said.

Those laws include Section 232 of the Trade Expansion Act, which Trump cited to enact tariffs on steel and aluminum imports from China, Canada, Mexico and elsewhere.

“Such an easy way to avoid Tariffs? Make or produce your goods and products in the good old USA. It’s very simple!” Trump tweeted on Saturday.

Of course, America’s trading partners haven’t let Trump’s tariffs stand without taking similar action themselves. Farmers, boat makers and whiskey and wine producers are just some of the U.S. industries caught in the middle.

“Farming is a very small margin, small profit business. We rely on lots of volume and lots of sales to generate a profit,” said Brent Bible, a soybean and corn farmer in Lafayette, Indiana, who has seen prices for both commodities drop in the past year. “We are operating at a loss now.”

Trump’s philosophy on some issues has evolved over the years.

He once described himself regarding the abortion issue as “very pro-choice.” Now, his administration promotes him as the most “pro-life president in American history.”

On trade, not so much. In “Trump: The Art of the Deal,” Trump complained of the Japanese that “what’s unfortunate is that for decades now they have become wealthier in large measure by screwing the United States with a self-serving trade policy that our political leaders have never been able to fully understand or counteract.”

Fast-forward nearly three decades, and Trump declared in his 2015 announcement for the presidency that other nations were prospering at America’s expense. “When was the last time anybody saw us beating, let’s say, China, in a trade deal? They kill us. I beat China all the time,” Trump said.

Trump’s approach on trade is a dramatic departure for the Republican Party, but GOP lawmakers have declined to take action that would block his tariffs. They credit his tactics for getting improvements to a trade deal with Canada and Mexico to replace NAFTA, and for getting China to the negotiating table.

“President Trump is the first president to take China head-on,” said Texas Rep. Kevin Brady, the top Republican on the House Ways and Means Committee. He said “everyone knows I’m not a fan of tariffs, but I think everyone knows as well that China has been cheating for far too long.”

Trump has received some encouragement from Democratic leaders. Senate Minority Leader Chuck Schumer, D-N.Y., tweeted to Trump: “Don’t back down. Strength is the only way to win with China.”

Current and former officials in the administration believe that voters will give the president credit for standing up to China, and not blame him for any pain that may result from the tariffs war.

While Trump casts his tariffs as being paid for by China, they actually are paid by the American companies that bring a product into the U.S. This can help some U.S. producers, though, because it makes their goods more competitive price-wise. Still, the burden of Trump’s tariffs on imports from China and other countries falls entirely on U.S. consumers and businesses that buy imports, said a study in March by economists from the Federal Reserve Bank of New York, Columbia University and Princeton University.

Republican-leaning business groups such as the U.S. Chamber of Commerce have warned that the tariffs threaten to derail the economy and low unemployment rates, but with economic growth at 3.2 percent last quarter and the unemployment rate at 3.6 percent, Trump isn’t changing strategy now.

“Tariffs will make our Country MUCH STRONGER, not weaker. Just sit back and watch!” Trump tweeted on Friday.

For Harris, memories of a warrior mother guide her campaign