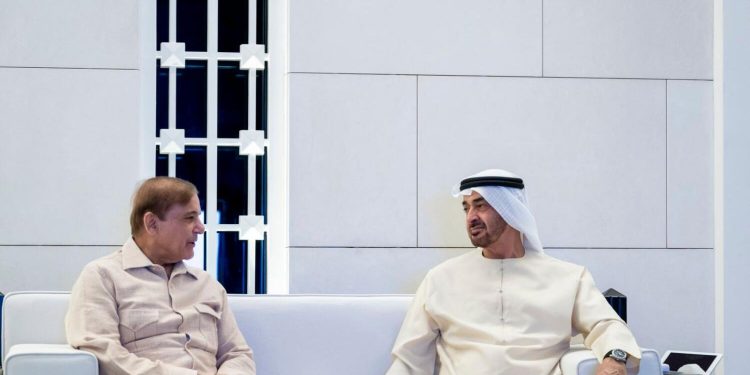 Pakistan accords top priority to its close relationships with the UAE and will further increase its cooperation on regional and international issues to bring stability and prosperity, says Prime Minister Muhammad Shehbaz Sharif on his maiden visit to the country.

In an exclusive interview with Khaleej Times, the new Pakistani leader expressed his desire to further strengthen the historical ties between the two countries and boost cooperation in various fields.

“Our relations with the UAE are also historic and robust. This is a relationship that is characterised by solidarity and understanding resulting from our strong leadership level contacts and close cooperation on regional and international issues over the years,” Sharif told Khaleej Times during the interview.

Sharif arrived in the UAE on Saturday evening after wrapping up an official three-day visit to the Kingdom of Saudi Arabia. He was called on by His Highness Sheikh Mohamed bin Zayed Al Nahyan, Crown Prince of Abu Dhabi and Deputy Supreme Commander of the UAE Armed Forces, to discuss matters of mutual interests and strengthen bilateral ties in key sectors.

The UAE is Pakistan’s largest trading partner in the Middle East and a major source of investments and remittances. Bilateral trade between the two countries stood firm at Dh30 billion ($8.19 billion) last year, and the two nations are committed to doubling trade volume to Dh60 billion in the next five years.

Sharif, 70, the younger brother of three-time Pakistani Prime Minister Nawaz Sharif, termed his Saudi visit successful and productive and said it would open doors for more opportunities for the Pakistani workforce in the kingdom. He said Pakistan aims for a deep strategic partnership with Saudi Arabia and will explore new areas of cooperation.

“My visit to Saudi Arabia was significant and most productive. Pakistan and Saudi Arabia enjoy longstanding fraternal ties, rooted deep in common faith, shared history and mutual support and understanding.”

“These relations are built on strong foundations. Our relationship is historic in nature and strategic in significance. Over the past seven decades, both countries have stood by each other, through thick and thin,” the Prime Minister said.

“I had substantive interaction with the Saudi Crown Prince with particular focus on advancing economic, trade and investment ties and the creation of greater opportunities for the Pakistani workforce in Saudi Arabia. We also exchanged views on a range of regional and international issues of mutual interest,” he said.

“Pakistan attaches great importance to its relations with all countries in the Gulf region. We have strong political, security and economic linkages with these countries. Above all, we have strong people-to-people linkages that play an important role in cementing bilateral relations in the region,” the Prime Minister said.

“It is our earnest desire to transform these relationships into deep, diverse and mutually beneficial partnerships. We are now working to explore new and non-conventional areas of bilateral cooperation, with particular focus on promoting economic, trade and investment ties.”

Israel ties not on cards

In reply to a question about any proposal on cards to recognise Israel shortly, the Prime Minister said Pakistan’s position is clear – there has to be a just settlement of the Palestine issue to the complete satisfaction of the Palestinians.

“For a just, comprehensive and lasting peace, Pakistan continues to support a two-state solution, with a viable, independent and contiguous Palestinian State, with pre-1967 borders and Al-Quds Al-Sharif as its capital, in accordance with the relevant United Nations and OIC resolutions,” Shehbaz said.

Sharif, who is known best for his administrative skills, acknowledged that Pakistan faces multiple challenges on domestic and international fronts but expressed his confidence in overcoming political, financial and energy crises.

“The external shocks of Covid-19 pandemic, resultant economic slowdown, disruption of supply chains, and Ukraine crisis have disproportionately impacted developing countries, including Pakistan. In order to put the global economy back on a sustainable growth trajectory, international cooperation is essential,” he said.

The Prime Minister said Pakistan’s foreign policy is one of friendliness and goodwill towards all the nations of the world.

“Peaceful development and friendly neighbourhood are our key objectives. We also seek objective, balanced and mutually beneficial relations with major powers. Pakistan has traditionally maintained good relations with the United States, China as well as Russia, and we are keen to strengthen and further diversify these partnerships,” he said.

“The challenges we face today can only be surmounted through inclusive multilateral approaches. We do not subscribe to bloc politics. Cooperation rather than confrontation is the way forward. Historically, it was Pakistan that acted as a bridge in opening up relationship between the United States and the People Republic of China.”

Shehbaz, who was previously thrice elected chief minister of the country’s biggest province, Punjab, said Pakistan does not believe in false choices between friends.

“China is Pakistan’s trusted friend and all-weather strategic cooperative partner. This is a decades-old partnership that is built on mutual trust, mutual respect and mutual benefit,” he said.

The Prime Minister said Pakistan and the US had maintained a longstanding bilateral relationship, which is broad-based in nature and covers issues of mutual interest.

“The two countries have closely cooperated over the past several decades on a number of issues,” he said.

He said Pakistan and Russia have close friendly relations based on mutual respect, trust and understanding, and growing bilateral cooperation in recent years in diverse fields, besides close cooperation at multilateral forums.

“Constructive engagement and cooperation are essential for peace, security and development in the region and beyond,” he said.

Shehbaz spoke at length about peace and stability in Afghanistan and said the fundamental objective of Pakistan’s policy on its western neighbour has always been to build long-term close cooperative relations in view of multiple factors, including “our shared history, common culture and linguistic affinities, and long border. Accordingly, we have always supported international efforts for restoration of peace and stability in Afghanistan.”

“I believe at this moment, Afghanistan needs international support to consolidate peace and revive economic activity. Constructive engagement of the international community is essential to help tackle the twin humanitarian and economic crises confronting the Afghan people,” he said.

“On our part, we have continued to support Afghanistan bilaterally. Along with Saudi Arabia, Pakistan also took the lead in mobilising the OIC and international partners to address the humanitarian situation in Afghanistan by convening the OIC extra-ordinary session of foreign ministers in Islamabad last December.”

“Pakistan is also working closely with the immediate neighbours of Afghanistan to promote a regional approach and consensual way forward for durable peace in Afghanistan,” he said.

Shehbaz expressed his desire to maintain good ties with India.

“In my inaugural address as the Prime Minister, I reiterated Pakistan’s desire for maintaining ‘good ties’ with India. I fully understand that normal neighbourly relations between Pakistan and India are essential for the prosperity and socio-economic development of South Asia.”

“This, however, can be best achieved by meaningful engagement and resolution of all outstanding issues, especially the core Jammu & Kashmir dispute, in accordance with the United Nations Security Council resolutions and wishes of the Kashmiri people. For peace to prevail, India must reverse its unilateral and illegal actions in IOJK. The onus, now, lies with India to create an environment conducive for a meaningful dialogue,” the Prime Minister said.

He said Jammu and Kashmir dispute is not only one of the oldest unresolved items on the agenda of the UNSC but also one that has held progress in the region at bay.

“Despite Pakistan’s earnest desire of having a peaceful neighbourhood, India has persisted in its intransigence towards resolving this core issue and has rather vitiated the regional environment with its campaign of systematic violation of human rights of innocent Kashmiris. The illegal and unilateral Indian actions of August 5, 2019, were manifestly anti-peace and against every tenet of international law, including UNSC resolutions, and India’s own commitments to the world about the final resolution of the dispute,” he said.

Sharif said Pakistan-China cooperation on the high-quality development of the CPEC had demonstrated the value of President Xi’s visionary Belt and Road Initiative. As a flagship of the BRI, CPEC’s full and early implementation remains pivotal for regional connectivity and common prosperity, he said.

“Efforts are underway to complete preparations for the next meeting of CPEC’s Joint Cooperation Committee, which would steer CPEC’s continued development,” he said.

“Government of Pakistan wants to ensure that CPEC complements and reinforces our broader efforts to enhance Pakistan’s overall business environment, economic competitiveness and development priorities. We appreciate that Chinese investors will have a key role in this process, and will unswervingly uphold their legitimate interests.”

“In the process of streamlining and improving CPEC’s implementation, Pakistan is ready to streamline procedures where required. Our quest for efficiency will not compromise on the attention to detail required for such a vast undertaking to proceed smoothly. We will also further enhance the one-window facilitation available to foreign investors to maximise gains both for our people and our development partners,” the Prime Minister concluded.