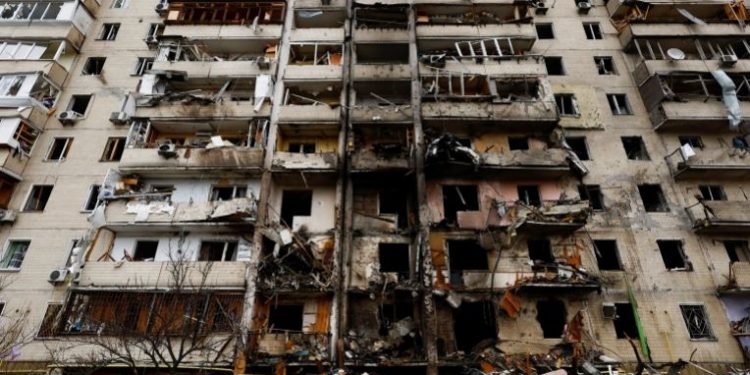 Blasts are heard amid signs Ukraine’s capital is coming under increasing threat from invading Russian forces.

Invading Russian forces are pressing deep into Ukraine as deadly battles reach the outskirts of Kyiv, with explosions heard in the capital that the besieged government has described as “horrific rocket strikes”.

The blasts in Kyiv early on Friday set off the second day of violence after Russian President Vladimir Putin defied Western warnings and unleashed a full-scale ground invasion and air assault that quickly killed dozens of people and displaced at least 100,000.

Anton Herashchenko, an adviser to the interior minister, wrote on Telegram that Ukrainian forces had downed an enemy aircraft, which crashed into a nine-storey residential building and set it on fire. It was unclear whether the aircraft was manned.

A series of explosions were heard in Kyiv earlier which Herashchenko said were the sounds of air defences firing at the aircraft.

DNTV, reporting from Kyiv, says the situation in the capital is “horrific and horrendous” with a “litany of air raids overnight”, and that at least one person had been killed when the downed aircraft crashed in a residential area.

“This is escalating in every respect – not just in the air but on the ground as well, there are armoured [Russian] columns all heading towards the city,” he added.

The explosions took place as many of the capital’s residents had taken shelter deep underground in metro stations. People brought sleeping bags and blankets, dogs and crossword puzzles to pass an uneasy night in the makeshift bomb shelters.

Kyiv Mayor Vitali Klitschko had called on the city’s three million people to stay indoors unless they worked in critical sectors and said everyone should prepare go-bags with necessities such as medicine and documents.

Simmons said air raid sirens sometimes do not give much warning for people to take shelter.

“There are four main metro stations where people are basically living now, and there’s real anger in the air,” he said. “The hatred for Putin is palpable.”

Since the military offensive began in the early hours of Thursday, 137 people, including 10 military officers, had been killed and 316 people wounded, Ukraine’s President Volodymyr Zelenskyy said in a video message on Friday. The dead included border guards on Zmiinyi island, also known as Snake Island, in the Odesa region, which was taken over by Russians.

Zelenskyy has promised to stay in Kyiv as his troops battle the Russian military advancing from the north, south and east of the country.

Russia launched its invasion by land, air and sea on Thursday following a declaration of war by Putin, in the biggest attack on a European state since World War II.

Putin says Russia is carrying out “a special military operation” to stop the Ukrainian government from committing genocide against its own people – an accusation the West calls baseless. He also says Ukraine is an illegitimate state whose lands historically belong to Russia.

Following the attacks, Zelenskyy declared martial law and called on civilians to enlist to fight the invasion

On Friday he warned that Russian “sabotage groups” have entered Kyiv and urged citizens to remain vigilant.

DNTV reporter said that there were a number of places in Kyiv where civilians can now be issued a weapon.

“When these Russian forces – and it’s not if – when they reach the capital, there is likely to be fierce resistance,” Simmons said.

“The overall mood is one of horrendous fear of what’s going to happen next.”