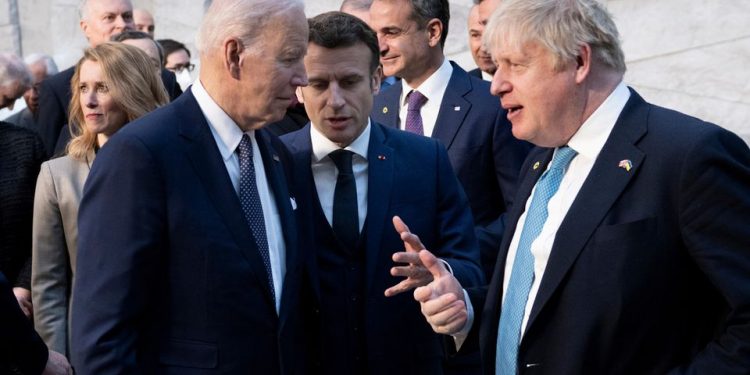 BRUSSELS/LVIV/MARIUPOL, Ukraine – Western leaders meeting in Brussels on Thursday will agree to strengthen their forces in Eastern Europe and increase military aid to Ukraine as the Russian assault on its neighbour entered its second month.

Ukrainian President Volodymyr Zelenskiy urged them to go further and repeated his call for a no-fly zone over his country, where thousands of people have been killed, millions become refugees, and cities pulverised since Russian President Vladimir Putin unleashed his invasion on Feb. 24.

In Mariupol, the southern port city that has come to symbolise Ukraine’s plight, people were burying their dead and queuing for rations in pauses in the bombing.

One woman there, Viktoria, buried her 73-year-old stepfather Leonid, killed when the car ferrying him to a hospital was blown up 12 days ago.

“This guy had taken a seat instead of me and then they all got blown up in that car,” she told Reuters, pointing to the mangled remains of the vehicle.

“It could have been me,” she sobbed.

Hundreds of thousands of people have been hiding in basements in Mariupol with no running water, food, medicine or power.

Ukrainian officials say they have pushed back the invaders in other areas, including around the capital Kyiv, thwarting Russian hopes of a swift victory.

In Brussels, Western leaders will warn Putin his country will pay “ruinous” costs for invading Ukraine during a series of NATO, G7 and EU summits over Thursday and Friday. U.S. President Joe Biden is among those attending.

Alarmed by the prospect that Russia might escalate the war, the NATO nations will agree to send Kyiv equipment to defend against biological, chemical and nuclear attacks.

“We must ensure that the decision to invade a sovereign independent country is understood to be a strategic failure that carries with it ruinous costs for Putin and Russia,” Canadian Prime Minister Justin Trudeau told the EU parliament.

The first U.S. shipment from a new, $800 million arms package for Ukraine will start flying out in the next day or so, a U.S. defence official said. read more

The Kremlin said most NATO member states suffered from an “hysterical and inadequate” understanding of what is going on in Ukraine.

Washington said Biden and his European counterparts would announce new sanctions against Russia and measures to tighten existing sanctions. However, EU diplomats played down expectations of major new sanctions.

Zelenskiy, who will address the NATO and EU summits by video conference, said he expected “serious steps” from Western allies. He repeated his call for a no-fly zone, although Western leaders have rejected this as a move that would drag them directly into the war.

He complained that the West had not provided Ukraine with planes, modern anti-missile systems, tanks or anti-ship weapons.

The Ukrainian leader, who has won admiration across the West for his leadership under fire, also urged people around the world to take to the streets in support of Ukraine.

“Come from your offices, your homes, your schools and universities, come in the name of peace, come with Ukrainian symbols to support Ukraine, to support freedom, to support life,” he said in a video address.

After four weeks of conflict, Russia has failed to seize any big city and with its ground advances seemingly stalled has engaged in aerial bombardments of cities, causing a humanitarian crisis. The Kremlin denies targeting civilians.

Although the Kremlin says its operation is going to plan, Russian forces have taken heavy losses and face supply problems.

Moscow calls its actions a “special operation” that it says is not designed to occupy territory but to destroy its southern neighbour’s military capabilities and capture what it regards as dangerous nationalists.

The West says this a baseless pretext for an unprovoked war.

The port of Mariupol has been worst hit. Satellite photographs from commercial firm Maxar showed massive destruction of what was once a city of 400,000 people, with residential apartment buildings in flames.

Reuters on Wednesday reached a part of the city captured by Russian forces. More than 100 people waited patiently in line for boxes of food and humanitarian supplies being distributed from a truck.

Angelina, a young mother of two, said she had received bread, diapers and baby food.

“It’s difficult to leave by bus now. We hope the number of people trying to get out will go down and it will get easier for us to leave,” she said.

To counter troop shortages, Moscow was moving in fresh units close to the Ukraine border and calling up soldiers who had recently served in Syria, it said.

Zelenskiy repeated he was ready to have a face-to-face meeting with Putin to end the war.

“We are ready to discuss the terms of the ceasefire, the terms of peace, but we are not ready for ultimatums,” he said.

International sanctions have frozen Russia out of world commerce. But the biggest loophole is an exception for its energy exports. Some EU member states are resisting calls to ban Russian oil and gas as they rely heavily on them.

EU leaders are expected to agree at their summit to jointly buy gas as they seek to cut that reliance. L3N2VQ3IG

Brussels is also aiming to strike a deal with Biden to secure additional U.S. liquefied natural gas supplies for the next two winters.