Whatever I am today is because of fans, says Atif Aslam

Singer to perform at the Coca-Cola Arena on Friday.

by Dubai News
in Entertainment, Top News
Reading Time: 12 mins read
148 5
A A 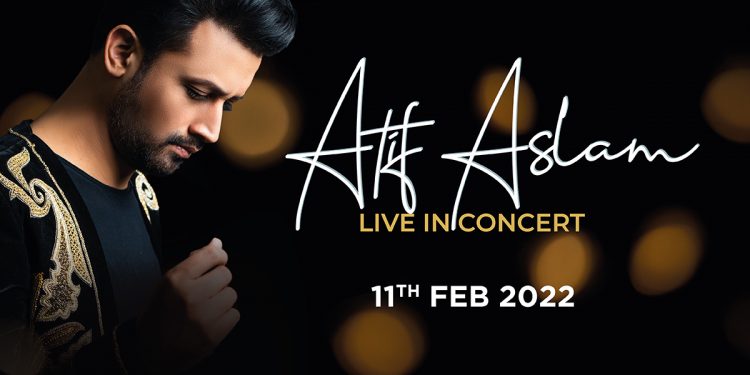 In any form of art, those who dare to push boundaries and innovate are the ones likely to be remembered for generations to come.

Such is the case with 38-year-old Pakistani singer Atif Aslam, who has long entertained us with his distinctive vocals and musical improvisations, whether with independent hits like his latest, Ajnabi, or through tunes for Bollywood (Tera Hona Laga Hoon, Tu Jaane Na, among many others) and the Pakistani film and television industry.

A budding cricketer turned musician, Atif kicked off his career with the band Jal, dropping the song Aadat in 2003 which went on to become a huge hit. He released his first solo album, Jal Pari, in 2004, some of whose songs were picked up by an international film, Man Push Cart.

He has released chart-topping tracks over an almost two-decade period. Naturally, we were curious as to which song from this extensive repertoire is most requested at his live performances.

Atif’s answer, revealed in a Zoom interaction ahead of his latest gig in Dubai on Friday, February 11, surprised us. “That’s Gulabi Aankhen, which is not even my song! There is Aadat, and they (the fans) request for my other hits as well. But I find this (Gulabi Aankhen, a Mohammed Rafi hit from the 70s) request very odd because I had done an unplugged version in a cafeteria back in the day, and it was just recorded over a phone; it reached India and it was everywhere! There were no smartphones at this time.”

To have a low-key performance go viral even before the social media boom took over the world is no mean feat.

Evolving as an artist

But that is just the kind of stellar performer Atif is. Not only does he take a classic hit and make it his own, with all due respect to the original artist, but he continuously experiments with sound where his own music is concerned.

“My idea was to sort of changing my music, change my sound, and that’s what I did with Raat, with Ajnabi, with Kadi Te Hans Bol; I continue to do so because I believe that an artist should definitely reinvent himself every now and then, otherwise it becomes very boring. It became very boring for me as well; I couldn’t even enjoy myself performing certain numbers on stage, which is why I explored new opportunities and new music.” Ajnabi was shot within two days, Atif said, adding, “It’s great when you have a good director on board. Asim (Raza) is brilliant at what he does.”

On his equation with the lovely Mahira, star of films like Bol (in which both she and Atif made their movie debuts) and Bin Roye, Atif said, “Mahira was kind enough to be a part of the video. We go back a long way — our first movie was 11 years ago; so we thought of working together again and it was such a vibe! She loved the track; I enjoyed myself and people have enjoyed the new sound as well. So Ajnabi was quite a change and I felt, okay, there is room for this kind of music, so why not?”

Staying with the topic of music, Atif recently paid tribute to late singing legend Lata Mangeshkar, on Instagram Stories. He told City Times how her songs brought on a feeling of great nostalgia.

“I’d never met her but had heard a lot of great things about her. More than that I think I had a lot of memories (associated) with her music. My brother used to play these records for me, and whenever I listen to them now they bring back a lot of memories of friends, people from university, my relationships — I had her songs in the background.”

A return to acting

10 years after starring in the feature film Bol (his only film role to date), Atif made his television debut, playing Hilmand in the Hum TV series Sang-e-Mah, which focuses on life in a tribal area of Pakistan. What was the experience of doing this show like?

“It was fantastic! I really enjoyed myself. I have a lot more respect for the artists (actors) now because I got to know what they go through and how many hours they have to work in a day!”

As a singer, he said “you perform for a couple of hours and then you’re done, but (acting) is constant work.”

“It’s not a lot of fun to put on makeup and sit there and wait for your shot and then you have to be in character throughout the day —no matter what is happening at your end, no matter what you are going through. It was actually very challenging, and beautiful in its own way.”

He admitted he’d been “spoilt” for the past decade or so. “Wherever you go they spoil you with luxuries and stuff like that, which I don’t mind, which is great but of course, you get used to that, right? But we were shooting in a village and we didn’t have basic amenities. We were staying in a guest house, and the first night I checked the mattress and I was like, what am I doing… why am I doing this? So I calmed myself down and I collected myself and said ‘this is a part of the journey. I had to unlearn ‘Atif Aslam’ to get into that character. It’s mind-boggling that even after the pack-up, I was Hilmand for the next 50 days.”

Atif shared that fans could expect to see more of him on-screen “if the script is good”. “I waited many years to pick up the right script and this was it!”

Fans are lapping up his latest foray into acting. “They’ve started quoting Hilmand now! Hilmand said this… so we should do this! So they are also into this character now, and get inspired, which I love.”

Atif calls his fans ‘Aadeez’ which literally translates to ‘habitual’. No doubt his ‘Aadeez’ in UAE are delighted by the fact that he is returning for another concert after his recent performances at Expo 2020 Dubai (November 2021) and Yas Island Abu Dhabi (New Year’s Eve).

We asked him what continues to draw him to the UAE and what he loves most about the country.

“The love of my fans! And of course, I love the venues and how the whole production is great and top-notch. This time around I am performing with the Symphony Orchestra and there are a lot of people flying down from India, who are masters at playing some of the greatest and legendary numbers. I will be incorporating these in my set as well, which is very exciting for me as well as the fans.”

As someone who performs live regularly, how important is it for him to engage with his audience and does he ever alter a setlist as per what fans want?

“I believe it’s very important for an artist to interact with the audience. But unless and until you’re really in your moment and you’re having a great time and enjoying yourself on stage by not looking at the audience, that’s a different ballgame altogether….

“But I get my adrenaline rush through my fans. When I see them enjoying the music and singing along, that’s what keeps me going on stage.”

Does he plan on staying long in the UAE this time? “We have a UK tour scheduled right after the Dubai gig. But Dubai is like this second home and not too many people know that I have lived there for quite some time — four-five years of my life!”

In a parting message for his fans, Atif said, “I would like to thank them for listening to my music all these years. And the way they have appreciated my acting is just wonderful and beautiful. I cannot thank them enough for what they have done for me. I want to tell them I love them a lot. Whatever I am today is because of them.”