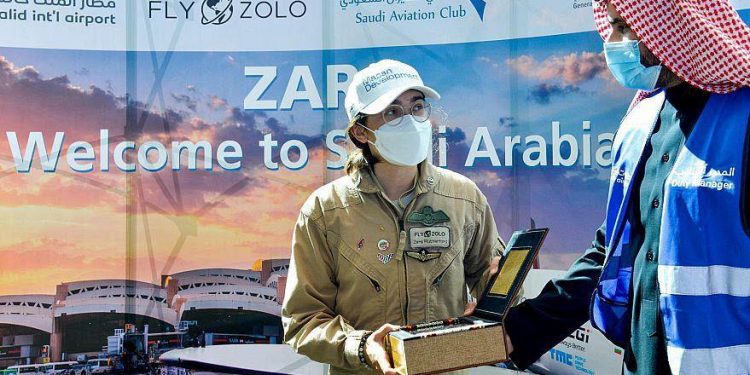 Belgian pilot Zara Rutherford landed at King Khalid International Airport in Riyadh on her lightweight Shark aircraft as the part of her effort to become the youngest female pilot to make a solo flight around the world,

Saudi Arabia aviation authorities designed the hosting of this event to shed light on the role of women in the aviation sector, with respect to empowering Saudi women in the field of aviation in the Kingdom in line with Saudi’s Vision 2030.

Upon the 20-year-old’s arrival in Riyadh yesterday coming from the United Arab Emirates, Zara Rutherford was received by the Ambassador of Belgium to the Kingdom of Saudi Arabia Dominique Mineur, and a number of Riyadh Airports Company and Saudi Aviation Club officials.

During a special reception to mark the occasion, Captain Rutherford said that she is delighted to have arrived in Riyadh. “The flight exceeded all my expectations and gave me unforgettable moments and tremendous challenges as I enjoyed the wonderful view when flying over Saudi Arabia, where every moment was an exceptional experience,” she said.

“I strive to achieve my goal of being the youngest woman in the world to fly solo around the world and set a record in the Guinness Book of World Records, in addition to encouraging girls and women to realize their dreams of such a flight and inspire them to pursue careers in science and aviation”.

The professional captain had set out on this flight in August 2021 from Kortrijk-Wevelgem International Airport in western Belgium, with her goal in mind to fly for a distance of 32,000 miles across five continents, passing through 52 countries, including the Kingdom of Saudi Arabia.