Dubai has turned into an open-air gym as thousands of people participate in the sixth Dubai Fitness Challenge.

Fitness villages, neighbourhood parks, homes… the city is on the move, all responding to the call of Sheikh Hamdan bin Mohammed bin Rashid Al Maktoum, Crown Prince of Dubai. While some get their 30 minutes of exercise in before they go to work, others find time in between a busy schedule to work out. For others, it is the time of the year that they love to travel to the city.

For Scottish friends Lyndsay and Jo, the Dubai Fitness Challege is the perfect excuse for them to travel to Dubai every year. They have been visiting occasionally since 2001 but it was only in 2019 that they discovered the challenge. “When we talked towards the Kite Beach on the first day of our holiday in October 2019, we could see the fitness village on the beach,” recalled Jo.

“However, we assumed that it would be some kind of organized sporting event. Never did we imagine it would be available to everyone. We very quickly realized the fun that was waiting and we were absolutely hooked.”

However, pandemic played spoilsport and since then, this is the first year that the friends have been able to come back. “We have made up for lost time by participating in as many activities as possible,” said Lyndsay.

“So far this year, we have taken part in the Under Armour Turf Games Engine female pairs – something I have never done before, and we were very proud to have come in second place. We have enjoyed several classes at DP World Kite Beach fitness village. At the RTA Last Exit fitness village, we completed a military boot camp. We also did the 5K run at the Mai Dubai City Half Marathon in DIFC.”

The friends say what they love the most about the challenge is the buzz and energy. “There are multiple age groups, cultures and fitness abilities all working out together in an inclusive environment. Everyone is having great fun, and everyone makes an effort to participate,” said Jo. “Our friends and family do think we are a little crazy going on holiday to exercise but we just love it!” chuckled Lyndsay. 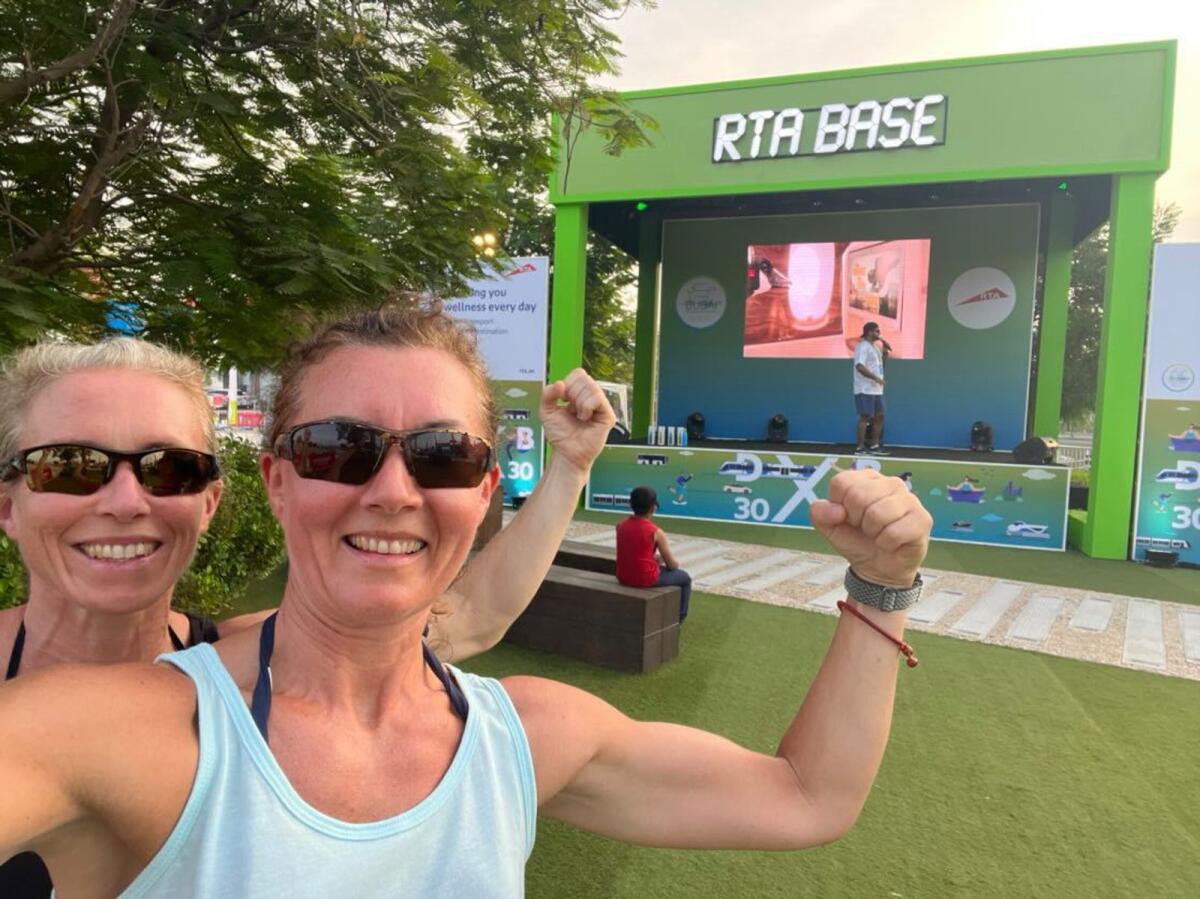 Preetam Savio works as an emcee and hosts the daily workouts at Kite Beach’s fitness village from 3pm to 11pm every day. On days he is unable to hit the gym before he goes to work, he joins the sessions there. “There are loads of classes like BodyCombat, Zumba, Fitboxing, HIIT and it only takes 30 minutes, right? So I find the time when I can while hosting.” 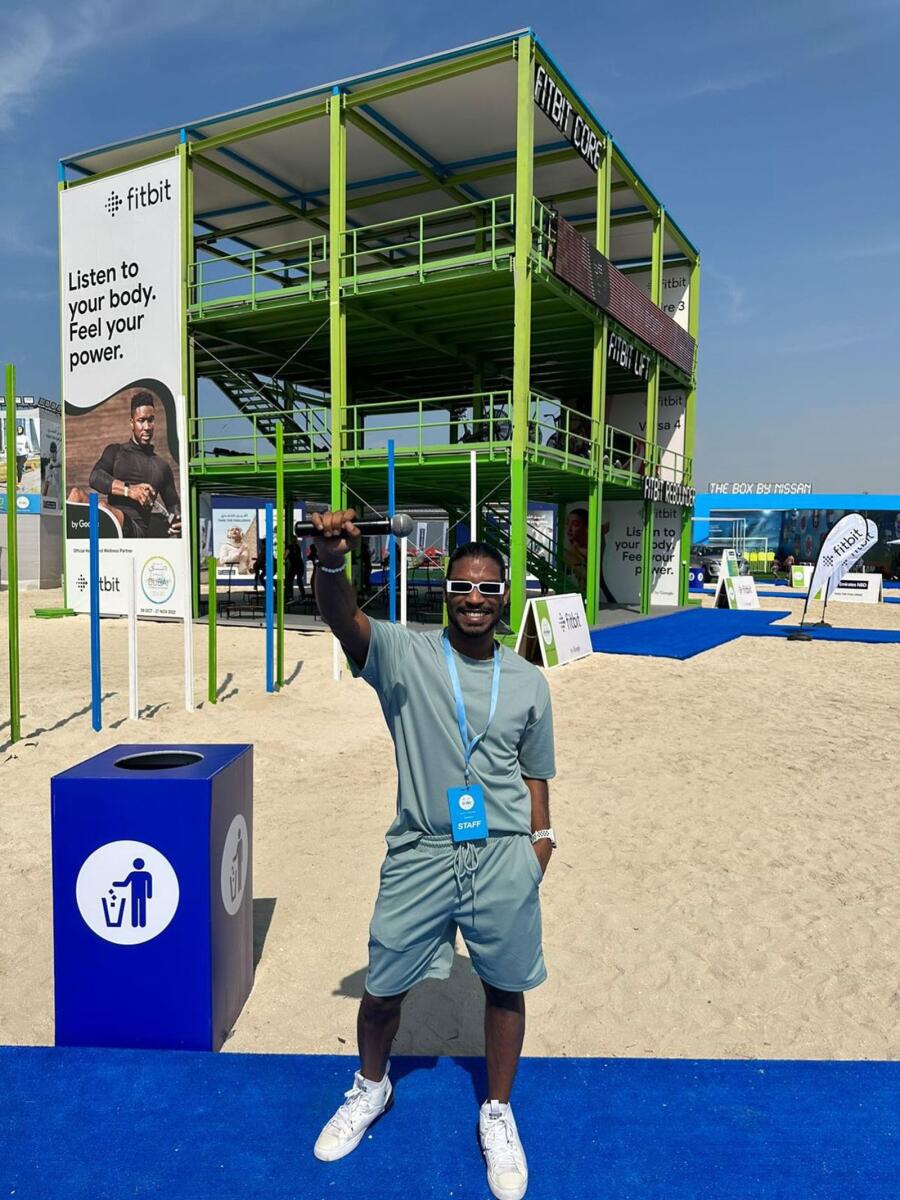 He says the experience of hosting at Kite Beach has been an incredible one. “The biggest takeaway from this has been that there is no judgement,” he said. “Fitness is for everyone. Everyone puts away their differences and has a mindset to support each other’s goals. The best thing is, I have made so many new friends. It is exhausting but I wouldn’t trade it for anything else.”

Dubai tourist Anthony Stringer had never heard of the Dubai Fitness Challenge until he landed in Dubai. “I saw the hoardings about fitness challenge, and I couldn’t figure out what it was,” he said. “I came for a walk at DIFC and I saw the exercises at the fitness village. I decided to try cycling because it is something I do back in London.” 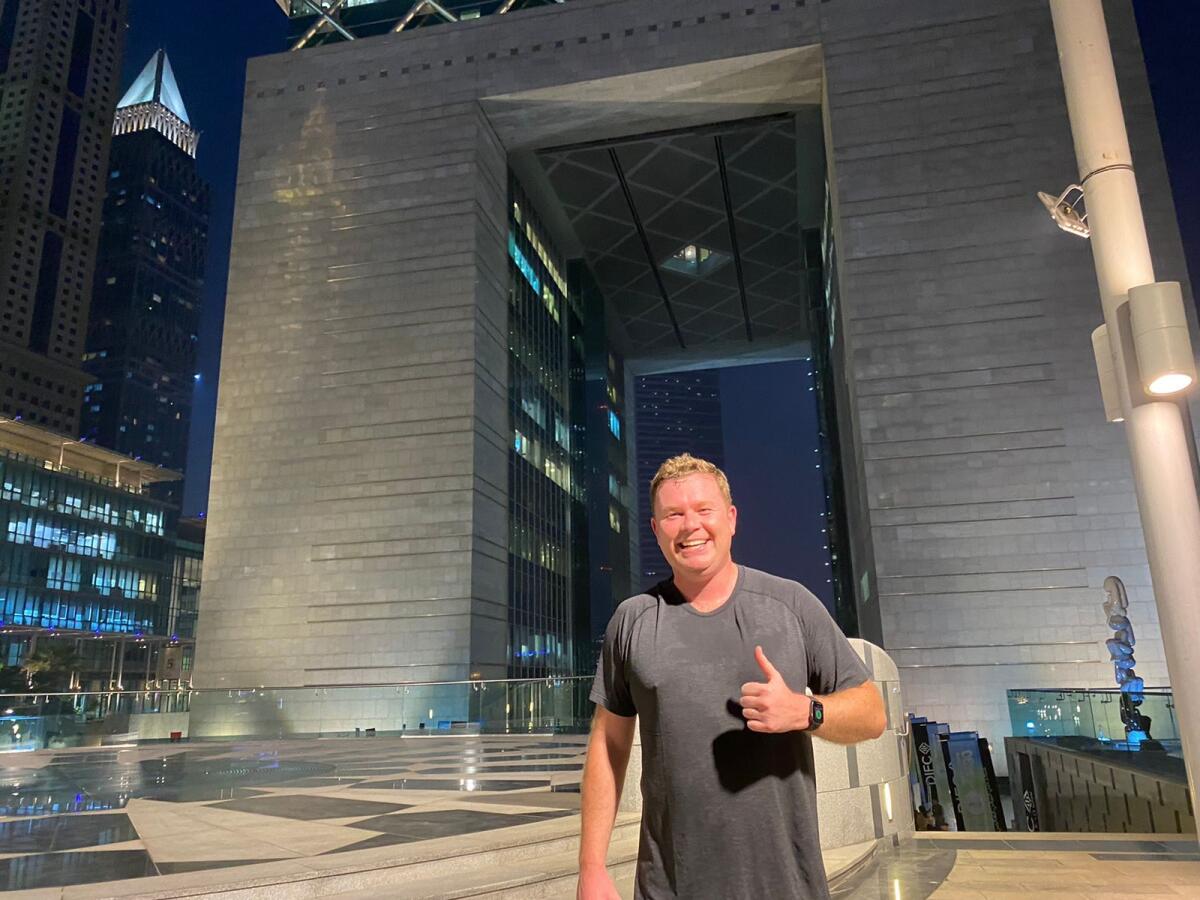 According to Anthony, this campaign is unlike anything he has seen before. “I have been to a lot of countries, but I have never quite seen something like this,” he said. “Everywhere in Dubai the emphasis is on fitness. It is absolutely amazing. I really enjoyed the free classes. I think I am going to keep coming back every day.”

For Dubai resident Salma Ajmal, the 30×30 is an added boost to keep her healthy. “I am generally a very active person, but this is an added accountability by our Crown Prince himself,” she said. “So, every day I make sure I do at least a 30-minute workout. Since the challenge began this year, I have been going for jogs or kayaking every day. Over the weekend I want to go try some of the fitness village activities.”

The Dubai Fitness Challenge will continue until November 27 and residents can enjoy hundreds of free activities at two fitness villages and 19 fitness hubs across the city.