Playing for Team Europe, Federer and Nadal lost to Jack Sock and Frances Tiafoe of Team World 6-4 6-7 (2/7) 9-11 in a dramatic doubles match This day, this match, had to come, of course, for Roger Federer, and for tennis, just as it inevitably must for every athlete in every sport.

Federer bid adieu Friday night with one last contest before he heads into retirement at age 41 after a superlative career that included 20 Grand Slam titles and a statesman’s role.

He wrapped up his days as a professional player with a loss in doubles alongside his longtime rival Rafael Nadal for Team Europe in the Laver Cup against Frances Tiafoe and Jack Sock of Team World in London.

The occasion was, after all, about the farewell itself. Or, better, the farewells, plural: Federer’s to tennis, to the fans, to his competitors and colleagues. And, naturally, each of those entities’ farewells to Federer. 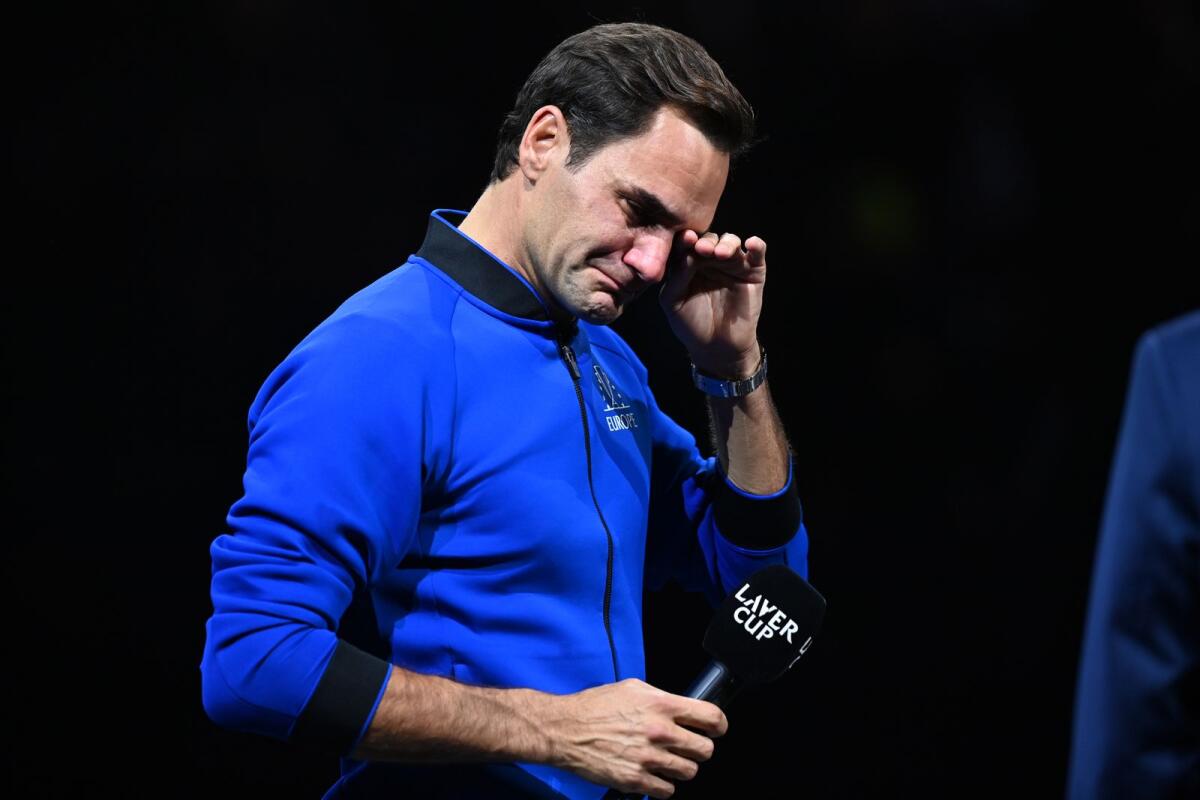 Roger Federer struggles to hold back the tears during the post-game speech after playing the final match of his incredible career. (AFP)

When the match, and with it his time in professional tennis, ended, Federer hugged Nadal, then Tiafoe and Sock.

And then Federer began crying as he went to greet the other members of Team Europe. As cascades of clapping and yells of affection came from the stands, Federer put his hands on his hips, his chest heaving. Then he mouthed, “Thank you,” while applauding right back toward the spectators who had chanted, “Let’s go, Roger! Let’s go!” during the concluding moments of a match that lasted more than two hours and ended at about 12:30 am GMT. 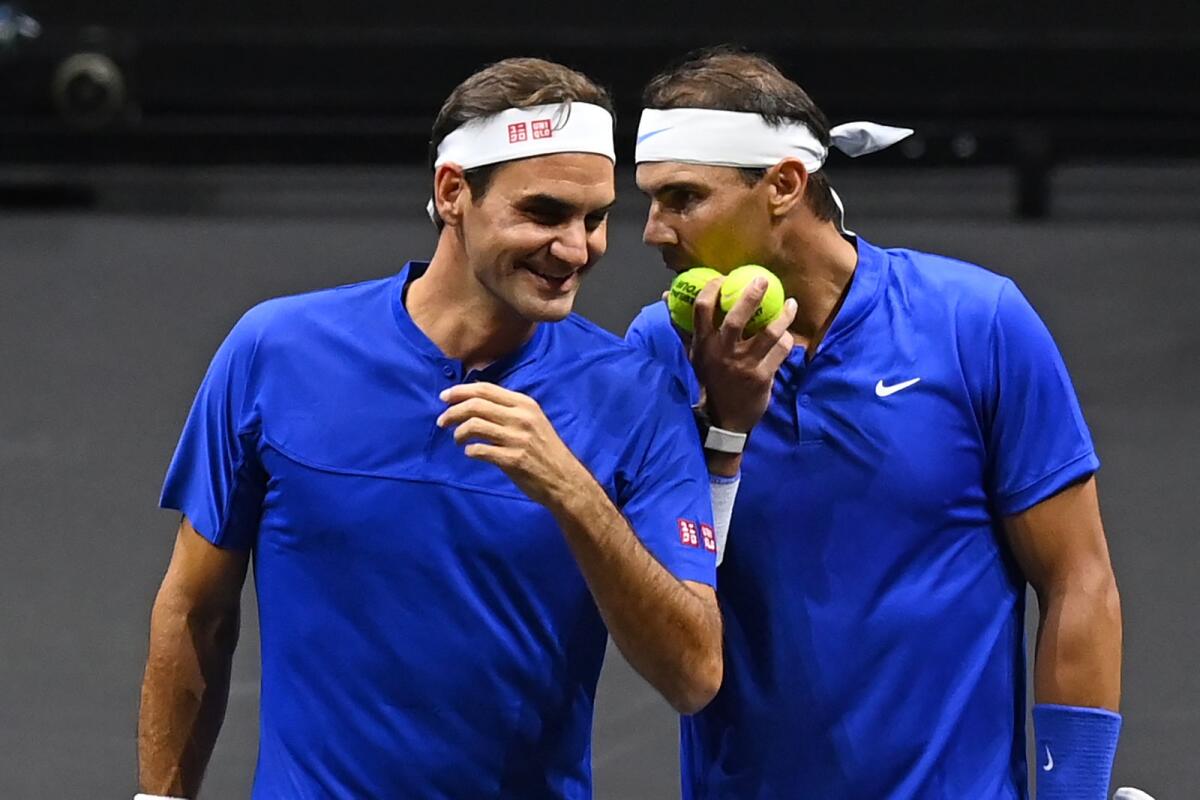 Roger Federer (left) gets instructions from Rafael Nadal during their doubles match. (AFP)

Fans flocked from far and wide to pay homage to Federer as the Swiss tennis great brought down the curtain on his glittering career at London’s O2 Arena on Friday.

The 41-year-old played with great rival Nadal in the evening doubles slot on the opening day of the Laver Cup in what was his last professional match.

Federer, a 20-times Grand Slam champion and regarded as one of the greatest players of all time, announced last week that a persistent knee injury meant he was ending his 24-year career.

Tickets for his match with Europe team mate Nadal against American duo Frances Tiafoe and Jack Sock were like gold dust.

But some fans got lucky. 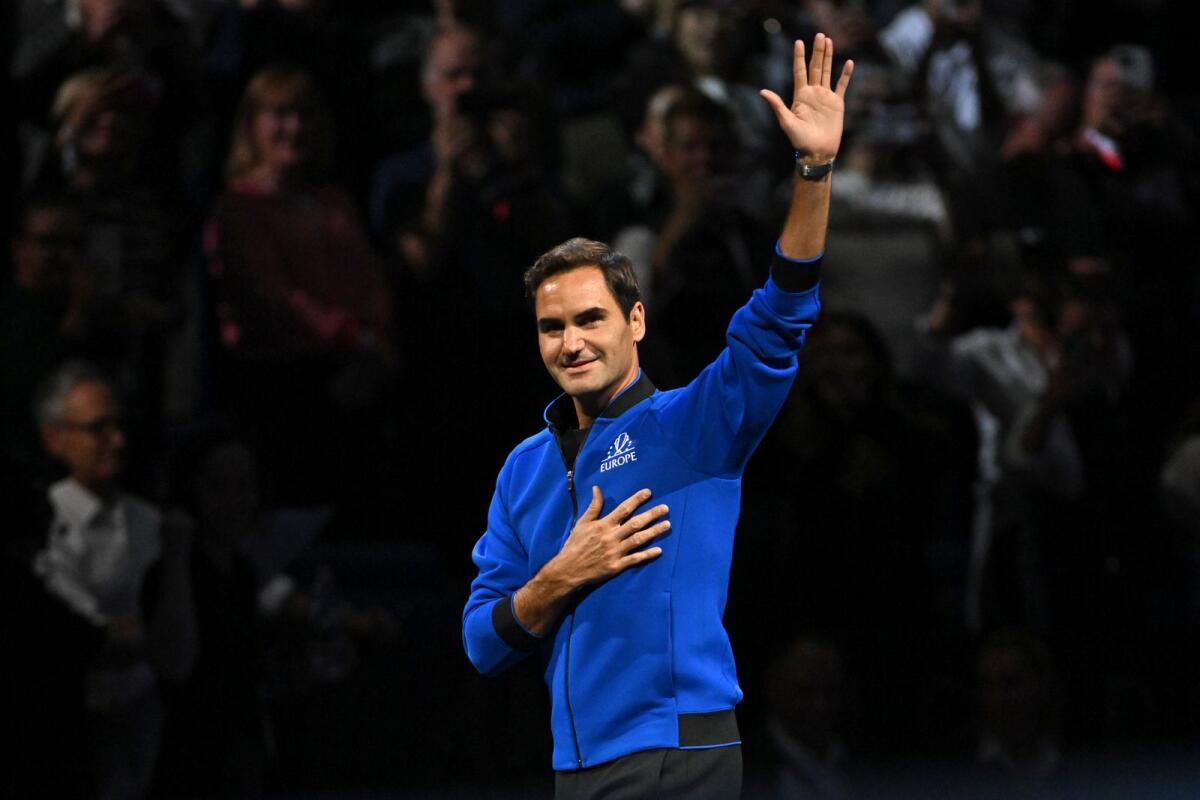 Roger Federer acknowledges the applause as he walks onto court at the O2 Arena in London on Friday. (AFP)

Many walking into the Thames-side venue where eight-times Wimbledon champion Federer won the ATP Finals title in 2010 and 2011 were draped in Swiss red and white and had handkerchiefs at the ready for what promised to be an emotional evening.

“He is one of the best ambassadors for Switzerland so I’m super happy to be here,” 31-year-old Sonya Carvallares from Zurich said.

“He is more than just a tennis player he is an icon.”

Federer has not played a competitive match since last year’s Wimbledon and Carvallares said the news that he was ending his golden career was sad, but expected.

“We saw it coming right, he is not eternal. On a personal level I’m very happy we got the tickets for today especially now. But it’s mixed feelings in a way.

“In terms of number he’s not the greatest, but in our hearts he is the greatest. I think it’s going to be emotional, I might have a few tears in the eyes.”

While many fans came from Europe, Federer’s unique appeal spans the globe.

Miraaj el-Haque, dressed in a sweatshirt emblazoned with Federer’s caricature and the slogan “Greatest of All Time” travelled all the way from Bangladesh.

“The entire first chapter of my life from when I was five to now I’m 23….I’ve known nothing but him in the sports world,” he said outside the O2 Arena.

Asked what makes Federer so special, he said: “I think how relatable he is, and how much of a role model he is and how he makes a fan feel when he plays.” 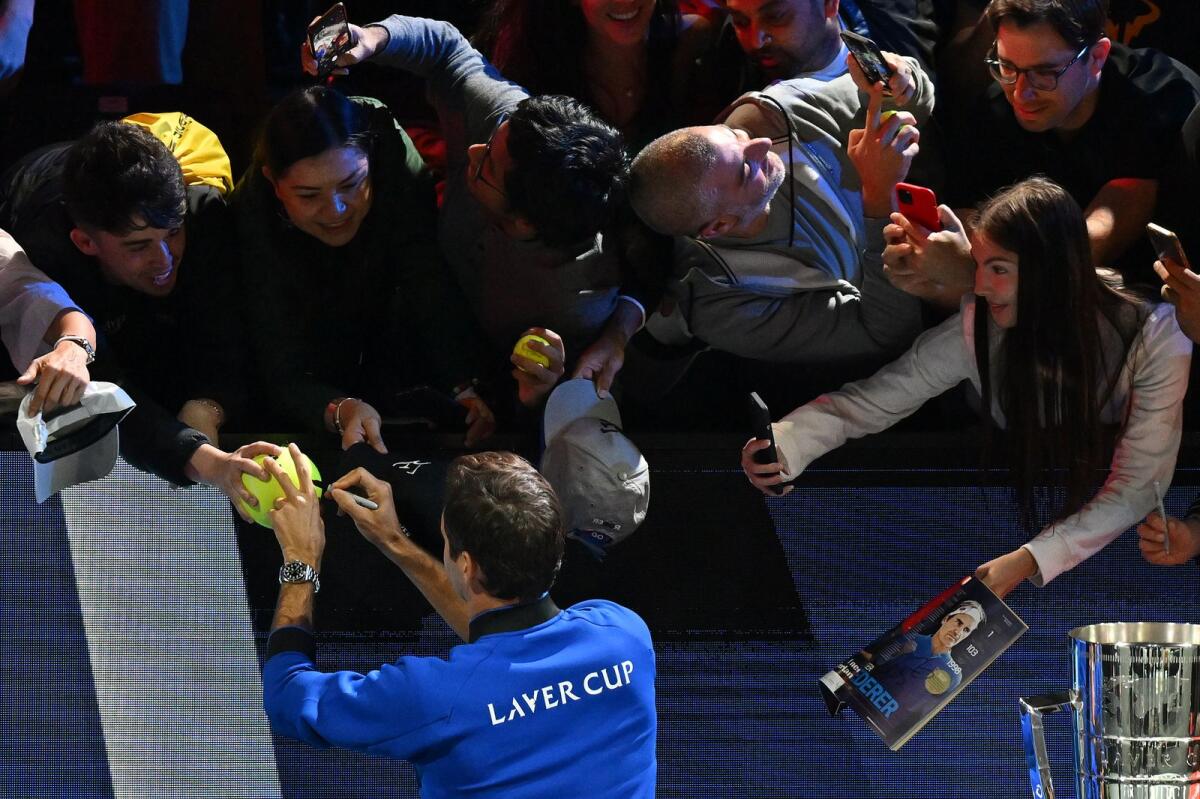 Roger Federer signs autographs for fans at the O2 Arena in London on Friday. (AFP)

“I think his connection with the fans is something I don’t think any other player will have for a while.

“The way he makes you feel, the way he plays the game, the way he conducts himself off the court, I think all those factors make him the greatest athlete in any sport.”

Sadra Mahoob travelled from Tehran to watch Federer for one last time.

“Roger is a superstar in Iran, everyone knows about him and had the dream to watch him in a live match,” he said.

Swiss student Aurille von Ruht said the finale, with Nadal, was the perfect way for Federer to go out.