‘Golden Canary’ diamond goes on display at Sotheby’s in Dubai 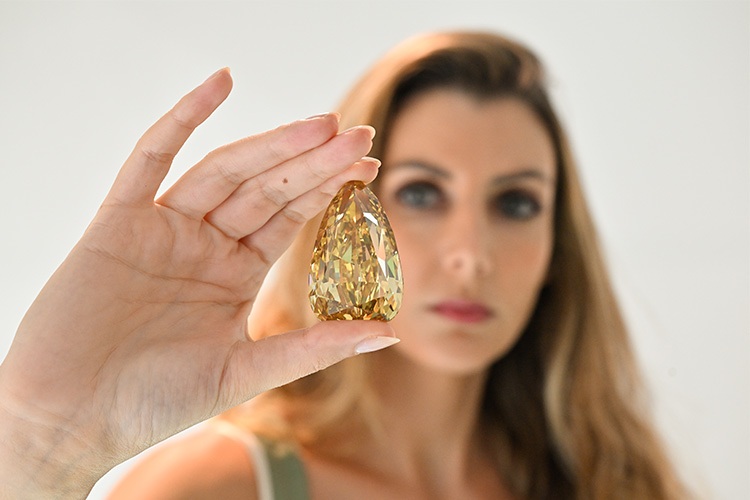 Sotheby’s has unveiled to the world another landmark gem: The Golden Canary. Weighing a colossal 303.10 carats, the Fancy Deep Brownish-Yellow Diamond is one of the largest polished diamonds in the world and the largest flawless or internally flawless diamond ever graded by the Gemological Institute of America (GIA).

The miraculous diamond also boasts a peerless history and provenance – formerly weighing just over 407 carats as the “Incomparable Diamond.” Recut from its original shield-shape into a classic pear-shape, the Golden Canary is now deeper in colour, brighter in hue and more elegant in profile, rightfully claiming its spot in the pantheon of exceptional diamonds.

The Golden Canary is set to highlight Sotheby’s Magnificent Jewels auction in New York on Dec.7, 2022, with an estimate in the region of $15 million, and offered without reserve, with bidding starting at just $1.

Quig Bruning, Head of Jewelry for Sotheby’s America’s: “We have had an exceptional year of presenting extraordinary coloured diamonds at our global jewellery auctions, as the demand and appetite for these rarities continues to grow.

Just two weeks after the record-breaking sale of the Williamson Pink Star for $57.7 million, we are honoured to offer the largest polished diamond in present existence to appear at auction.

Steeped in history, The Golden Canary is one of the most exquisite diamonds to ever be discovered, not only for its sheer size and intensity in colour, but for its stunning beauty that is sure to captivate collectors around the world. Sotheby’s is privileged to help write the next chapter for this incomparable, reborn gem.” 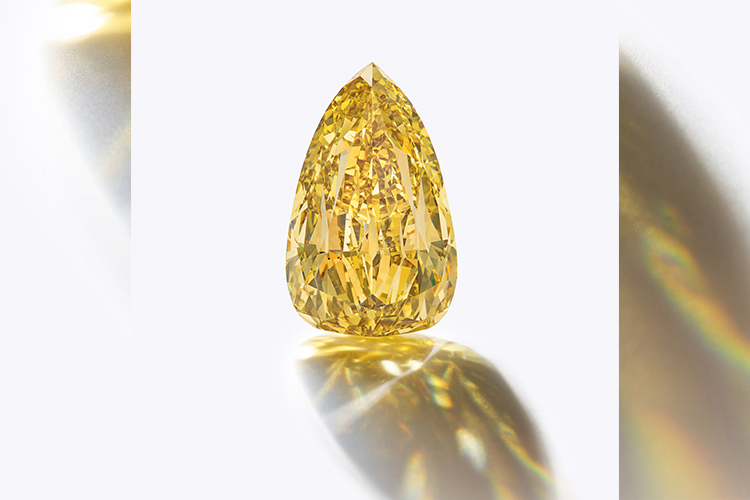 Given the global interest in a treasure of this nature, the diamond will be showcased on a worldwide tour. Unveiled today in Sotheby’s galleries in Dubai, it will then travel to cities including Taipei, Geneva, and Hong Kong.

The Legendary Story of the Golden Canary

The Golden Canary’s illustrious provenance begins in the early 1980s in the Democratic Republic of Congo.

The stone was originally found amongst a pile of rubble by a young girl playing in the backyard of her uncle’s house. At the time, miners from the nearby MIBA diamond mine had considered the discovery too bulky to be diamond-bearing and had discarded it. Little did the miners know, that rubble turned out to be an 890-carat rough diamond, one of the largest rough diamonds the world had ever seen.

The girl gave the stone to her uncle, who, in turn, sold it to local diamond dealers.

The diamond was first presented to the public in 1984 at the Smithsonian’s National Museum of Natural History, displayed alongside the world’s most legendary diamonds.  As the largest uncut, rough diamond known at that time, the 890-carat gem became a global news sensation, captivating the world’s curiosity.

Over the course of the next five years, the rough diamond was cut into 15 finished stones, from which the largest of the resulting diamonds, a Fancy Deep Brownish-Yellow weighing 407.49 carats, became formally known as the “Incomparable.”

The shield-shaped step cut, with its unusually shaped facets and small table, preserved much of the shape and bulk of the original rough and was the largest internally flawless or flawless cut diamond ever created and graded by the GIA.

In the years since its cutting process was finished, the Incomparable appeared in numerous museum exhibitions around the world, most notably The Nature of Diamonds at the American Museum of Natural History in New York in 1997, Diamants at the Muséum National d’Histoire Naturelle in Paris in 2001, and most recently in The Nature of Diamonds, an exhibition that toured The Royal Ontario Museum and the Houston Museum of Science in 2008.

The decision was eventually made to recut the Incomparable to maximise the depth of its colour, brighten its hue and improve its shape, resulting in the stone known today as the Golden Canary.

The GIA’s verdict about the stone in its recent monograph is unequivocal: “The re-cut of the Incomparable to the current 303.10 carat pear modified brilliant is to look at the diamond as new; a re-creation bringing to bear the advances in technology, computer modeling and visual evaluation available today.  Everything from the orientation of the stone, to its shape and cutting style, has been considered.”