India could manage168 for 6, before the England openers took charge 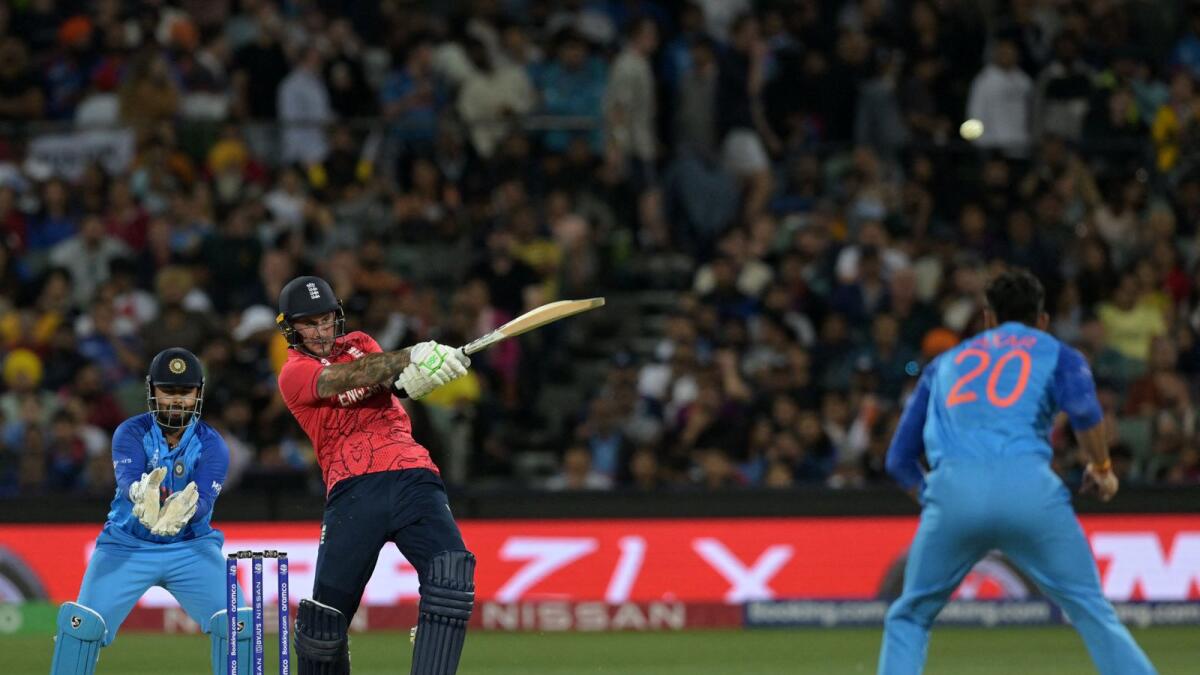 England’s Alex Hales (centre) hits a six off India’s Axar Patel (right) as wicketkeeper Rishabh Pant looks on during the T20 World Cup semifinal at the Adelaide Oval on Thursday.

England strode past India by 10 wickets in the second semi-final of the T20 World Cup 2022 at the Adelaide Oval, Australia, on Thursday to set up a final date with Pakistan in Melbourne this Sunday .

Openers Alex Hales and Jos Buttler turned it on with some astonishing batsmanship by clubbing unbeaten half-centuries. Chasing a target of 169, Hales and Buttler were simply brilliant as England reached home in 16 overs.

For all of England’s game-breaking talent, this win that takes them into the 2022 Men’s T20 World Cup final was all about doing the basics right. They protected the short square boundary in Adelaide, giving away only two sixes until the start of the death overs.
They saw a chance to break open a chase of 169 in the powerplay, when the ball was coming on nicely under the lights, and seized it. Ten boundaries in the first six overs. And their second-highest score against India in a T20I while the field restrictions were on.
A score 63 for 0 in six became 170 for 0 in 16. Jos Buttler became a supernova. Alex Hales became a dream come true. Jeetega bhai, jeetega became Sweet Caroline.
The Hales gamble
One horrid rain-soaked night at the MCG, England played the way they swore they never would. The captain then came out and said “let it hurt”.
Pain is powerful, but just as well as it disorients, it brings clarity. In that it forces people to do everything possible to never feel it again. And that’s what’s happened.
Since that defeat to Ireland, where they kept second-guessing themselves, England have batted and bowled with ultimate clarity. The selection of Hales was one of ultimate clarity. He came with solid experience in Australian conditions. They needed that experience. Buttler made the call. And now here is the payoff.
A player who, for a long time, came to be known as a disruptive force within the England team was given a second chance. And he’s repaid their faith with an innings that broke the biggest superpower in the world of cricket.
Hales equalled India’s tally of sixes all by himself – seven – reducing their bowlers bowlers to rubble. He even backed himself to clear Adelaide’s massive 88-metre straight boundaries.
When all was said and done and he was picking up his Player of the Match award, he looked straight into the camera and said, “I never thought I would play a World Cup again.”
A few India fans must be going, “If only…”
Buttler’s brilliance
This is how you break a match-up. Coming into this game, Buttler had fallen to Bhuvneshwar Kumar five times in 32 balls in T20I cricket.
He must have known this because first ball he charged out of his crease, intent on negating the India bowler’s biggest strength. His swing.
These were the kinds of moves Buttler was making all night as he finished on 80 off 49.
He front-loaded Adil Rashid against India’s right-hand heavy top-order. And the legspinner took out Suryakumar Yadav.
He reaffirmed Chris Jordan’s faith in his yorkers. One of those toppled Virat Kohli off his feet.
Buttler was at the centre of a lot of good things – but most of them probably date back to the drawing board.
England won this game in the backroom. They contained a 360-degree player by taking pace off, because at least that way, you’re only defending one side of the pitch. The one in front of the batter.
Buttler backed Rashid to pull off this heist, and this was even after the legspinner had been punished for a boundary first ball all because he had dared to toss it up.
Rashid could easily have protected his figures tonight. Sat back and pointed people to his tournament economy rate (6.25). But no, he didn’t. He bought into the plan and picked up perhaps the most important wicket for England.
Suryakumar is the man India look to for acceleration through the middle and the death. With him gone for 14 off 10, the game had changed.
Hardik rising
There was only one phase of play that England lost in this game. And that was when Hardik Pandya decided enough was enough.
He was 13 off 15 at the start of the 17th over. India were 110 for 3. They had tried to disrupt England.
Rohit Sharma hit one of the shots of the night – a one-bounce four over extra cover off a near Jordan yorker – but he fell three balls later.
Suryakumar succumbed after hitting Ben Stokes for a six and a four.
All of this prompted Kohli to go into anchor mode, which meant the other guy had to go big.
And Hardik did. He brought out the helicopter shot against Jordan. He escorted a wide yorker for four past short third off Sam Curran. He flat batted short balls all around the park.
India made 58 runs in their last four overs. Fifty of them came off Hardik’s bat. This was his scoring sequence from the 18th over: 6, 6, dot, 1, 1, 4, 6, 4, 1, 6, 4, out (having trodden on his stumps while whipping the ball for what would have been another four). Five of those 12 balls were attempted yorkers. Many of them landed pretty close to the perfect spot. But Hardik stands so deep in his crease and brings so much of his wrists into his strokeplay that even they became boundary-scoring opportunities.
From looking like they’d be lucky to get to 140, India had 168. India had hope.
And then nothing. Or maybe its worse than that because now there will be questions about the way they played their first 10 overs (62 for 2 with only seven boundaries) against a team full of power-hitters.
India, who topped Group 2 with four wins in five matches, were searching for their first global title since the 2013 Champion Trophy triumph. They won the inaugural T20 World Cup in 2007. But it was not to be as they were beaten by a clinical England.
Tags: Alex HalescricketEnglandiccICC T20 Men's World Cup 2022indiaIndia thumpingJos Buttler
Share9Tweet6Share2Send
">
ADVERTISEMENT