India beat arch-rivals Pakistan by four wickets in a dramatic and tense finish, thanks to Kohli's majestic 82 not out, and last over chaos 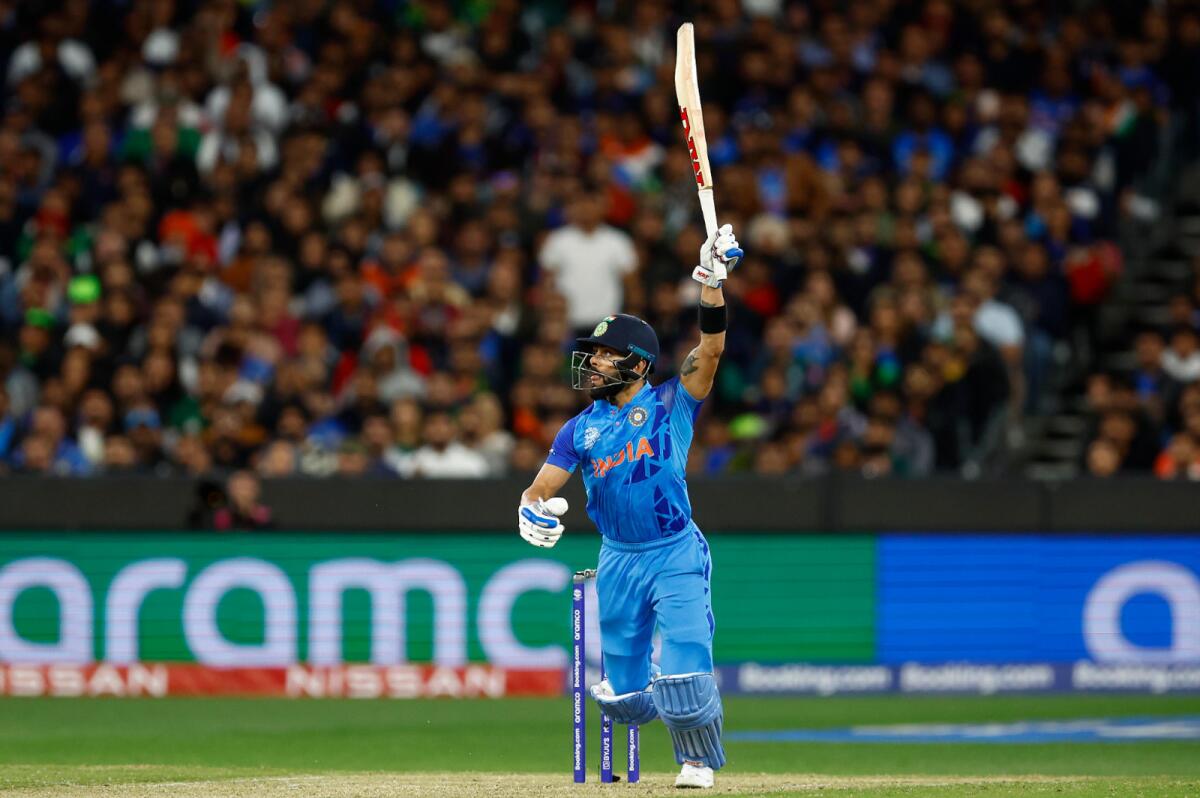 Virat Kohli plays a shot during his match-winning knock against Pakistan. (ICC Twitter)

Virat Kohli played the greatest knock of his T20 career as India clinched a humdinger at the ICC T20 World Cup on Sunday, beating arch-rivals Pakistan by four wickets at the Melbourne Cricket Ground.

Chasing 160, India were in deep trouble after being reduced to 31 for four in the seventh over.

India still needed 31 runs from 12 balls when the dangerous Haris Rauf (4-0-36-2) was brought back into the attack.

Rauf had things under control for Pakistan, giving away just three runs in the first four balls with India needing 28 off eight balls.

But Kohli turned the match on its heads with two stunning sixes in the next two balls, the first was punched off the back foot over the back of the bowler’s head and the second over the fine leg boundary with a magical roll of the wrists.

With 16 needed from the last over, Mohammad Nawaz dismissed Pandya in the first ball after the batter mis-timed a pull.

But Kohli hit the third ball, a waist-high full toss that was later called a no-ball, for a six over the mid-wicket fence, bringing the equation down to just six runs from three balls.

Reeling under the pressure, Nawaz followed that up with a wide.

The Pakistani all-rounder then bowled Kohli in the next ball, but it was a free-hit and Kohli and Dinesh Karthik ran three before the throw came back from the third man.

But there was more drama as Karthik was stumped after missing the line which brought Ravichandran Ashwin into the crease.

With Kohli stranded in the non-striker’s end, Pakistan got a whiff of a chance with new man Ashwin on strike.

But Nawaz bowled a wide, helping India level the score.

Ashwin then kept his calm and hit the final ball over the in-field for a single as India won against all odds.

Despite brilliant half-centuries from Shan Masood and Iftikhar Ahmed, India managed to restrict Pakistan to a modest total of 159/8.

The Indian bowlers were still dominating the contest under overcast conditions when Iftikhar joined number three Shan Masood (52 not out, 42 balls, 5 fours).

But once Rohit Sharma, who opted to bowl after winning the toss, brought the two spinners into the attack, Iftikhar began to play his big shots.

The 32-year-old all-rounder used his feet, hitting three sixes against Axar Patel and one against Ravichandran Ashwin.

But his dismissal by Mohammed Shami (4-0-25-1) against the run of play sparked Pakistan collapse as Babar’s team slumped to 91 for two 98 for five in the space of 10 balls.

Hardik Pandya (4-0-30-3) brought India back into the contest after Shami got the dangerous Iftikhar, removing Shadab Khan (5), Haider Ali (2) and Mohammad Nawaz (9).

With more than 100,000 fans watching the game at the iconic MCG, Pakistan batsmen succumbed to the pressure.

Masood cut a frustrating figure as Pakistan’s paid the price for their poor shot selection.

The 2009 champions failed to capitalise on the wonderful third-wicket partnership between Masood and Iftikhar.

I’m lost for words, this is my best knock, says Virat Kohli

Virat Kohli was lost for words after playing the greatest T20 knock of his career to help India script a thrilling four-wicket victory over arch-rivals Pakistan in the ICC T20 World Cup on Sunday.

Kohli’s 82 not out off 53 balls and his stirring 113-run fifth wicket partnership with Hardik Pandya (40 off 37 balls) rescued India from a hopeless position at the Melbourne Cricket Ground.

Chasing 160, Rohit Sharma’s team were reduced to 31 for four in the seventh over by the formidable Pakistan bowling attack.

But Kohli and Pandya kept India in the hunt before the former turned the match on its head. 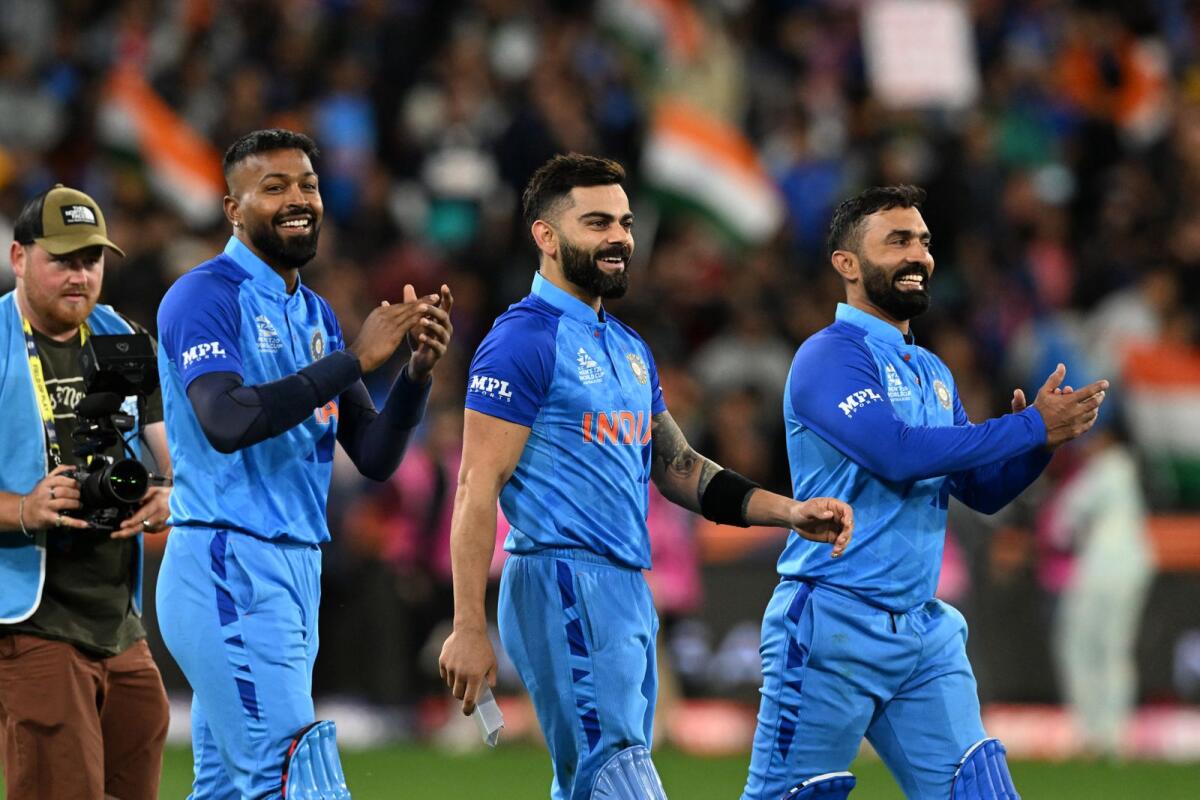 With 28 needed off just eight balls, Kohli hit two back-to-back sixes against the hostile Haris Rauf in the penultimate over to bring the equation down to 16 runs off six balls

India then survived a nail-biting last over from spinner Mohammad Nawaz to reach the finish line in the most dramatic of fashions.

But it was Kohli who mastered the chase with an epic knock. 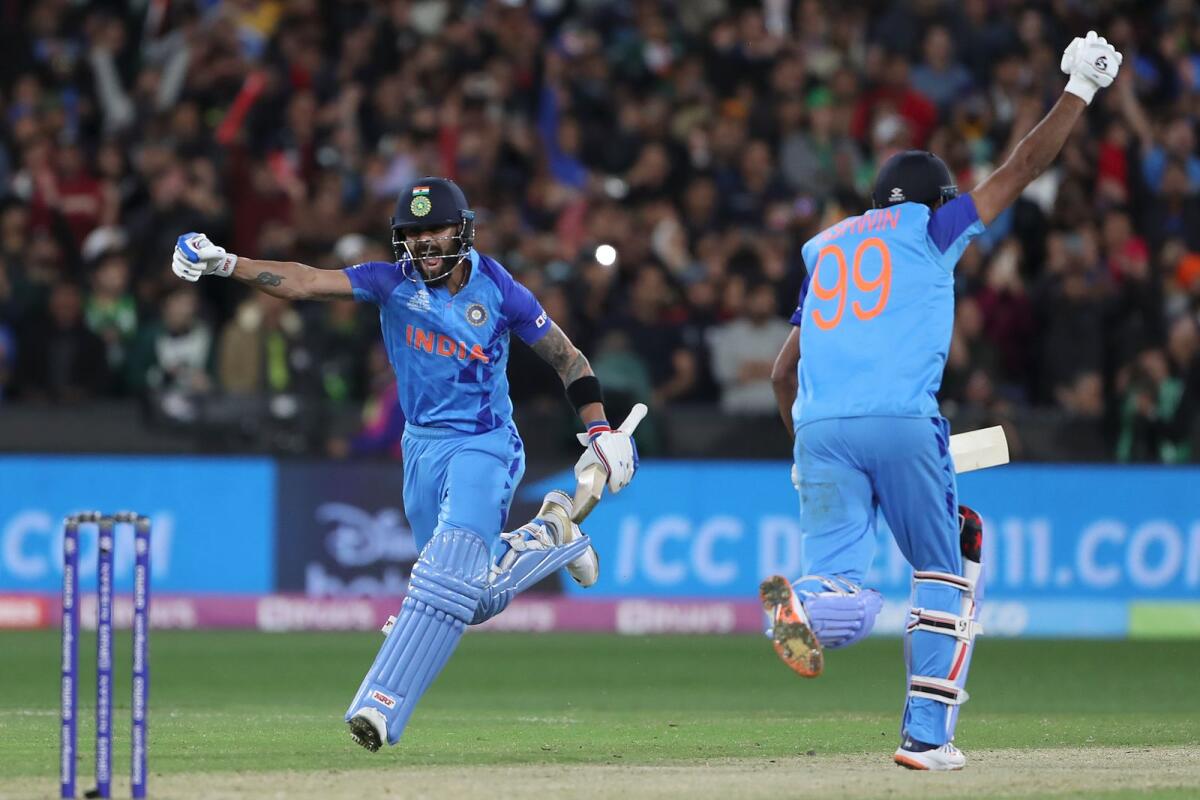 And when Ravichandran Ashwin hit the winning run in the last ball of the innings, the former Indian captain struggled to hold back the tears.

“Well, it’s a surreal atmosphere. I honestly have no words. I have no idea how that happened,” Kohli said at the post-match presentation.

“Hardik kept telling me, just believe we can stay till the end. I’m lost for words.” 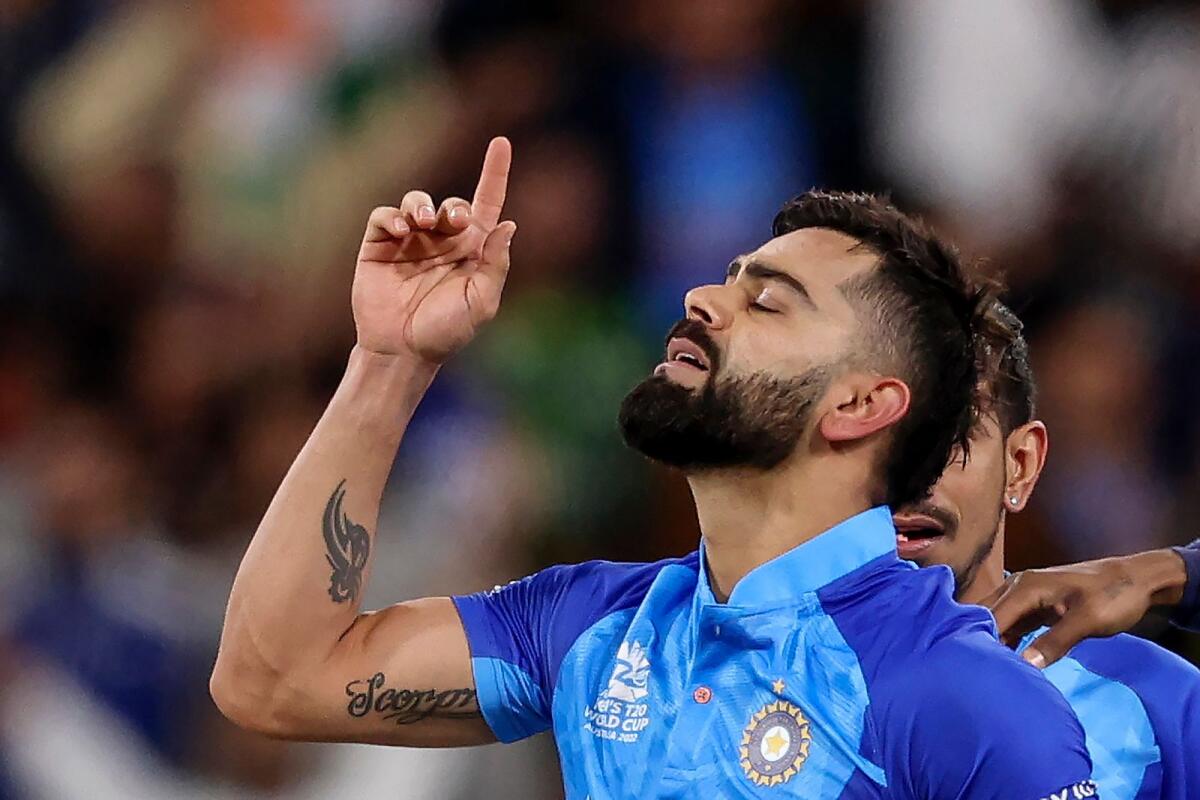 Kohli, who ended his three-year drought for an international century at the Asia Cup last month, revealed how they planned to attack Pakistan’s best bowlers in the back end of their chase.

“Well, I think when Shaheen (Afridi) bowled from the Pavilion end, I told Hardik we have to take him down,” said Kohli of the 17th over in which Afridi was hit for 17 runs.

“The calculation was simple. Nawaz had one over to bowl, so if I could take Haris (Rauf) down, they would panic. It came down to 16 off 6. I’m kind of lost for words.”

The Indian superstar then revealed how he hit the fiery Rauf for two back-to-back sixes in the 19th over. 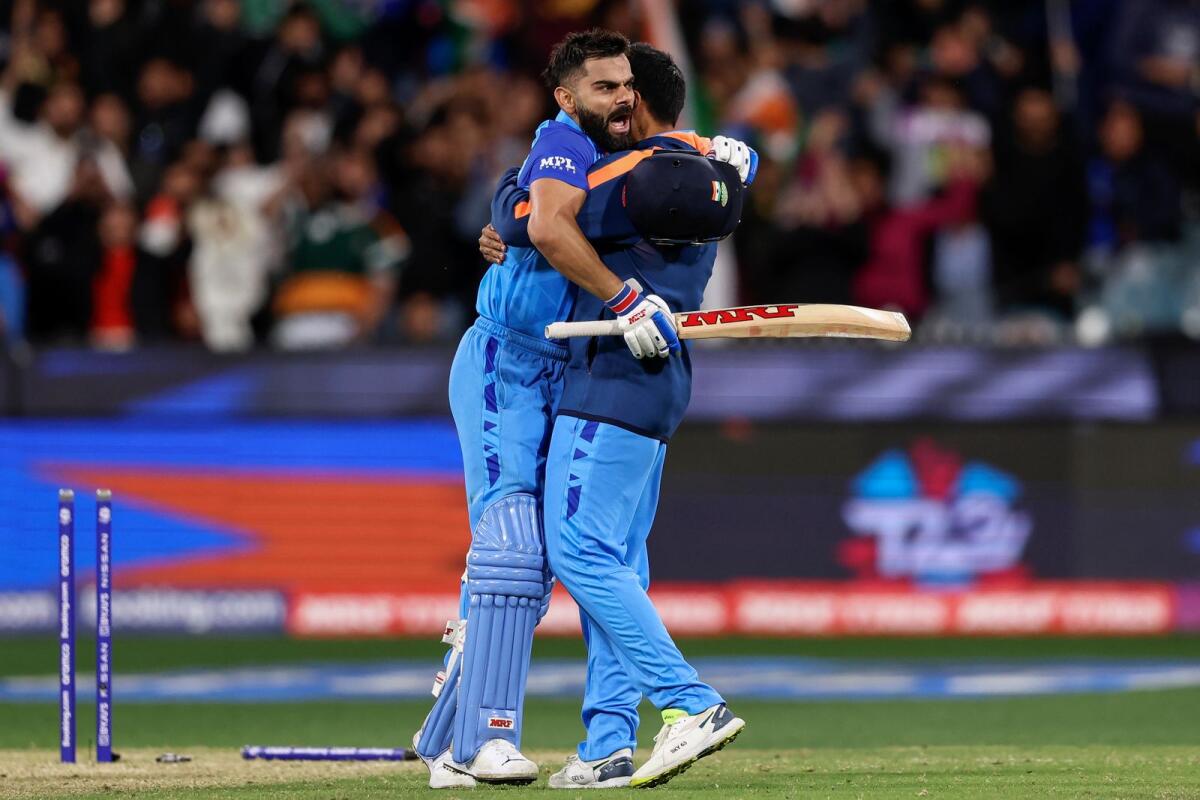 The fifth ball of the 19th over from Haris was punched off the back foot over the back of the bowler’s head and the last ball was flicked over the fine leg boundary.

“It’s just instinctively I saw it, told myself to stay still. The one at long-on was unexpected, it was a back-of-a-length slower ball. The fine leg one, I just threw my bat at it,” he said.

The 33-year-old player felt his match-winning knock on Sunday was even better than his magical 82 against Australia in the 2016 T20 World Cup in Mohali.

“Till today I said Mohali was my best T20 innings. Then I got 82 off 52, today I got 82 off 53. But today I will count this one higher because of the magnitude of the game and what the situation was,” he said.