Addressing the committee, Sheikh Abdullah expressed his delight at being in Bahrain and meeting His Majesty King Hamad bin Isa Al Khalifa, commending the Bahraini King’s directives and his determination to further boost the bilateral relations between the two countries.

“While raising our non-oil trade volume in 2021 to $6.5 bn is certainly an achievement, it does not reflect our true potential, as we believe there are still myriad opportunities [to grow it further]. The aspirations of our leadership, headed by President His Highness Sheikh Mohamed bin Zayed Al Nahyan and His Majesty Hamad bin Isa Al Khalifa, King of Bahrain, inspires us to take extra care and make further efforts to achieve such ambitions,” the UAE top diplomat said. 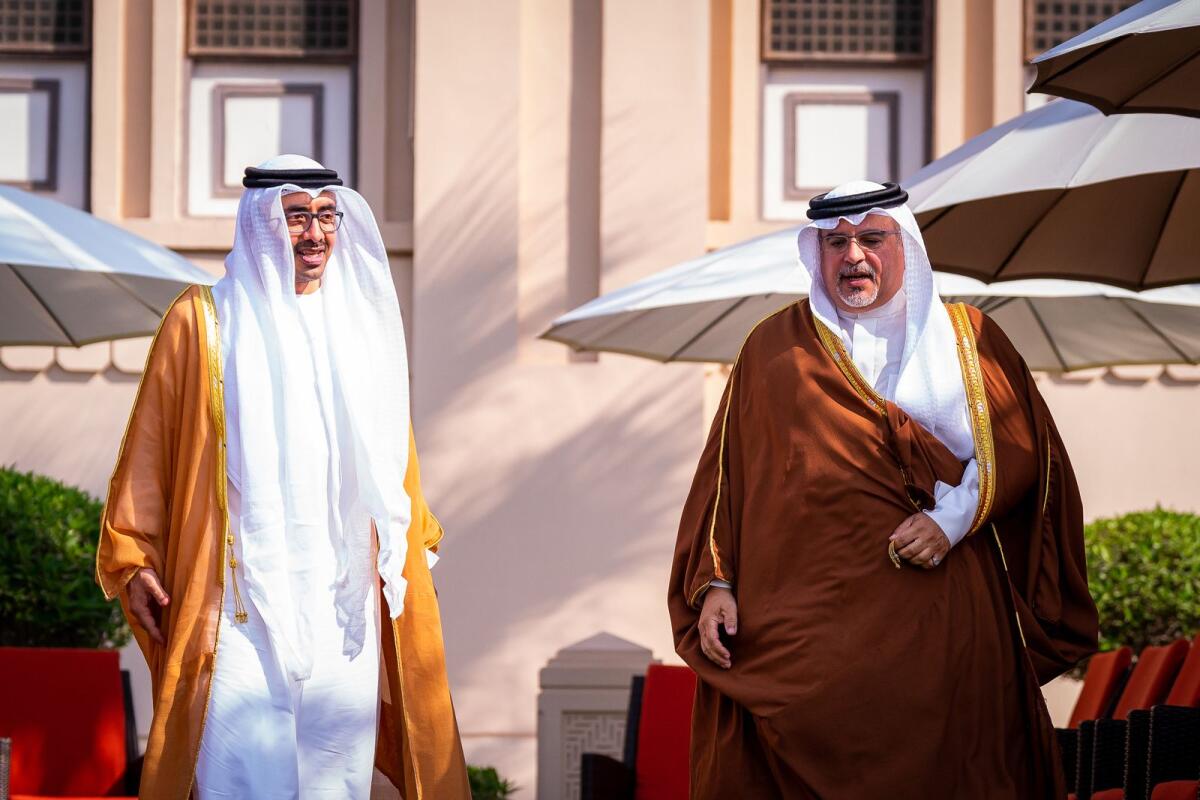 He highlighted the attention that their governments and private sectors give to enhancing cooperation, which drives the keenness on providing them with better opportunities, incentives and communication channels, as well as facilitating their joint enterprises and eliminating challenges facing them.

“We are looking forward to learning about the insights that the Emirati and Bahraini business communities have in common to seize available opportunities, drive the future of our relations, explore sectors with promising prospects, such as technology, banking, clean and renewable energy, healthcare and others,” Sheikh Abdullah explained.

The UAE foreign minister expressed his thanks and appreciation for the warm hospitality that Dr. Al Zayani has shown and the special attention he gave this visit and their Joint Higher Committee.

He also commended how His Majesty King Hamad and HRH Prince Salman bin Hamad Al Khalifa, Crown Prince and Prime Minister of Bahrain, attach great importance to the Committee, noting that the King Hamad’s latest visit to the UAE, which saw the signing of several agreements between their countries, helped grow UAE-Bahrain relations significantly.

For his part, Dr. Abdulatif bin Rashid Al Zayani underscored the deeply rooted UAE-Bahrain relations, which were established by the late founding fathers of both countries, adding that they are keen to develop them further with the support of their leaderships.

“The distinguished relations between the UAE and the Kingdom of Bahrain were established by the founding leaders, and we are keen to continue the march under the support and care of the leadership of the two countries,” he added.

“The relations between the UAE and the Kingdom of Bahrain are a model to be copied for cohesiveness, complementarity and interdependence between the leadership of the two countries and their peoples. They are underpinned by mutual respect, unity of purpose and destiny.

“We are proud of the wise foreign policy approach adopted by the UAE and the tangible efforts being made with regards to promoting peace and stability in the region and the world, driving cooperation between the GCC states, maintaining the integrity of the Gulf, and strengthening joint Arab action.”

He pointed out that the Emirati efforts in this regard are aligned with the foreign policy of the Kingdom of Bahrain, with both countries sharing similar goals and common aspirations.The Bahraini top diplomat congratulated the UAE on the success of Expo 2020 Dubai, and the great achievements made in organising the grand global event. He expressed confidence in the UAE delivering the same success in organising the 28th session of the Conference of the Parties (COP 28) in 2023.

The minister expressed pride in the contributions of the UAE-Bahraini Joint Higher Committee since its establishment, saying it has done a lot to enhance cooperation under the support and care of the leadership of the two countries.

In attendance at the session were Khalifa Shaheen Al Marar, Minister of State, Sheikh Sultan bin Hamdan bin Zayed Al Nahyan, UAE Ambassador to Bahrain, Saeed Mubarak Al Hajeri, Assistant Foreign Minister for Economic Affairs at the Ministry of Foreign Affairs and International Cooperation, and a number of officials from both sides.