Gitex 2022: Vision 2030 lives up to Saudi Crown Prince’s dream, amid ululations of ‘Ardah’ There couldn’t have been no better stage than Gitex Global 2022 — the biggest technology event in the Middle East, that is being held in Dubai and ends on Friday — to get a sneak peek into the Kingdom of Saudi Arabia’s (KSA) ambitious Vision 2030.

The vision is being championed by Mohammed bin Salman bin Abdulaziz Al Saud, Crown Prince and Prime Minister, KSA, who goes by his initials MbS. The teeming Saudi contingent spoke in one voice about living up to MbS’ dream that was initially unveiled in 2016.

The officials, who said they are all brothers and don’t want to be identified individually, said, “in this edition of Gitex Global, we’re showcasing our remarkable digital transformation through smart solutions.”The officials cited that the KSA’s Ministry of Interior has carefully chosen the Arabic word ‘Absher’, which originated from the heart of their homeland, symbolising the promise of accomplishment and immediate fulfillment of the demand.

“The ministry’s slogan ‘Absher for a safe homeland’ couldn’t have been more apt because it spotlights themes, including the impact of ‘Absher’, in achieving digital transformation. This enhances security and reduces all forms of crime, ensuring civic and traffic safety and further improved services for Hajj and Umrah pilgrims amid the authority’s plans to achieve sustainable development,” they said.

The officials were also quick to point out that the KSA ranked first in the Arab world in the ‘2021 World Happiness Report’, produced by the United Nations’ Sustainable Development Solutions network, and 21st globally.

“This is one of our biggest achievements – because the annual report, which scores countries globally on the health and happiness of their populations, is widely seen as a barometer for prosperity, and a key snapshot of a nation,” they added.

Smart devices, driverless vehicles and mixed reality (MR) — a user environment in which physical reality and digital content are combined to enable interactions with and among real-world and virtual objects — experiences may have been the top draw of Gitex Global. 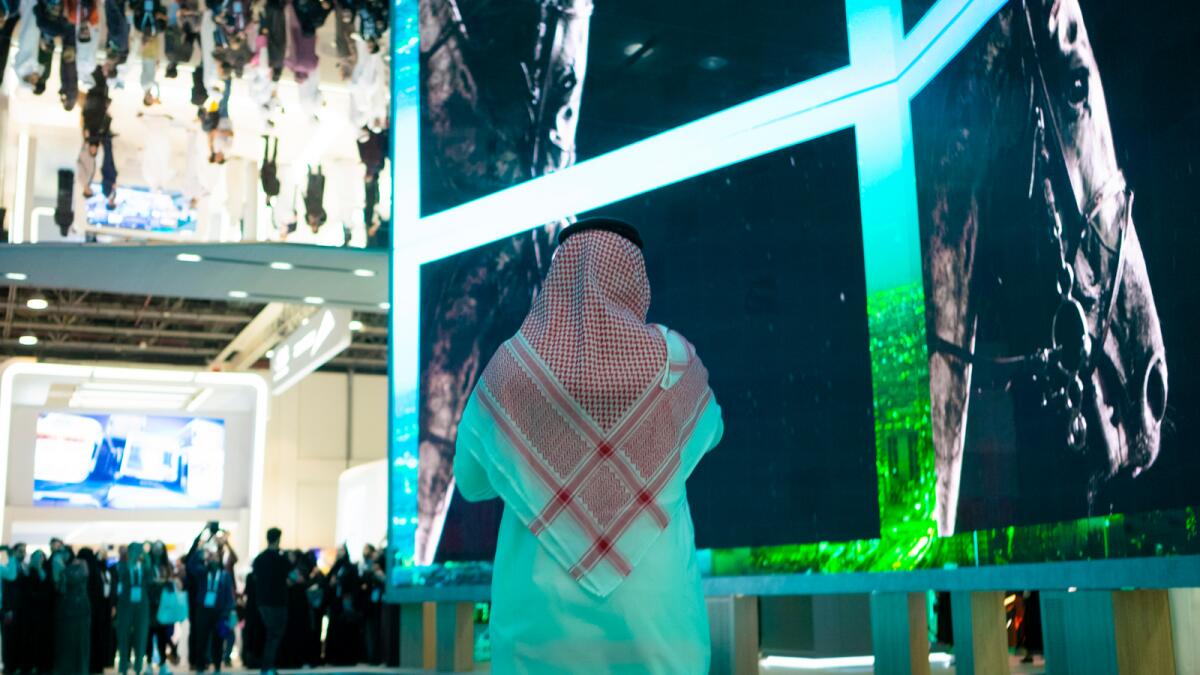 But the KSA booth transcended time and attracted visitors who can appreciate Arab culture.

The booth reverberated with the traditional Saudi sword dance, or ‘Ardah’, which played on a loop on giant LED screens, as part of an audio-visual presentation showcased by the country’s Ministry of Culture.

For the uninitiated, ‘Ardah’ has its roots in the Arabian peninsula’s military history, but today it is frequently performed during special occasions such as festivals and weddings. And no visit to the nation is complete without experiencing this historic and majestic dance.

In 2015, ‘Ardah’ was inscribed on the United Nations Educational, Scientific and Cultural Organisation’s (UNESCO) Representative List of the Intangible Cultural Heritage of Humanity.