Bangladesh added 52 runs in 11.2 overs in the morning session and lost four wickets in the process after resuming the day on 272 for six while chasing an improbable 513 for a win It took India only 11.2 overs on the final morning of the Chattogram Test to pick up the last four Bangladesh wickets and take a 1-0 lead in the two-match series. Their 188-run win meant India are now third on the World Test Championship points table. They have another five Tests in this cycle, and if they win four of those, they will guarantee themselves another appearance in the final.

Bangladesh were bowled out for a mere 150 in their first innings. But, set a target of 513 in a bit over two days, they showed great resistance the second time around and finished the fourth day on 272 for 6.
Shakib Al Hasan and Mehidy Hasan Miraz, the two overnight batters, started positively on the fifth morning, with Mehidy driving Mohammed Siraj on the up through covers in the first over of the day. From the other end, Shakib slog-swept Axar Patel for a six.
India struck back when Mehidy, once again trying to hit Siraj on the up, sliced one to backward point.
With India into the tail now, Shakib started farming the strike. He either skipped down the track against Axar or used the slog sweep to pick up the boundaries. Against Siraj, he opened up his stance and used the pull and flat-bat shots to keep going. Along with Taijul Islam, he added 37 for the eighth wicket; all 37 runs came from Shakib’s bat.
Shakib hit six fours and as many sixes in his entertaining 84 before being bowled by Kuldeep Yadav. The Bangladesh innings didn’t last long after that, with Axar finishing with four wickets in the innings and Kuldeep three.

Bangladesh added 52 runs in 11.2 overs in the morning session and lost four wickets in the process after resuming the day on 272 for six while chasing an improbable 513 for a win.

It was a matter of completing formalities for India after Axar Patel grabbed three wickets towards the end of the fourth day to push the visitors closer to victory.

The second and final Test starts on December 22 in Mirpur. 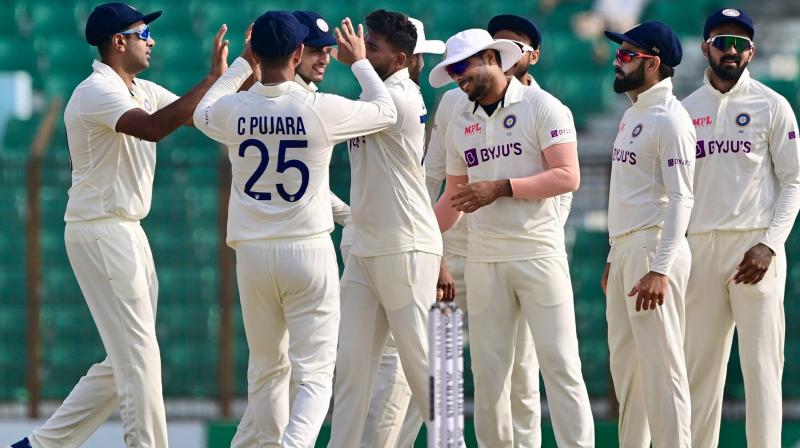