The central bank's outlook — which will accompany the rates decision — will be an important pointer to future policy moves, economists said On Wednesday, the Reserve Bank of India (RBI) raised its key lending rate by 35 basis points as inflation continues to stay above its tolerance band, but markets will be looking to its outlook on growth and prices for direction.

A strong two-thirds majority in a Reuters poll said it was still too soon for the central bank to take its eye off inflation, which slowed to 6.77 per cent in October, but has stayed above the upper end of the RBI’s 2-6 per cent tolerance band all year. 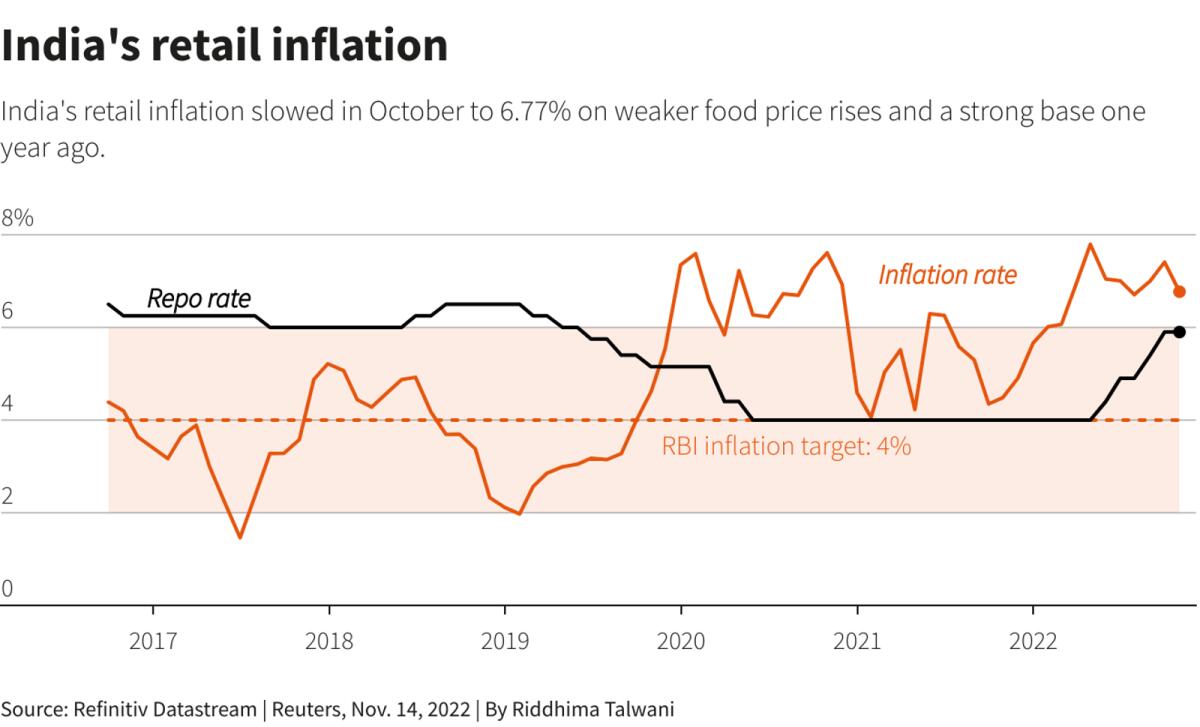 The central bank’s outlook — which will accompany the rates decision — will be an important pointer to future policy moves, economists said.

Global crude oil prices have been falling in recent months, but has yet to be reflected in domestic prices. Brent crude has fallen in six of the last 7 months and was trading at around $83 a barrel versus its peak of $139 touched in March.

“Though global oil prices are lower, pump prices in India have not changed and remain at the same levels since May 2022 and unless pump prices come down, it won’t have any direct implications for domestic inflation,” said Indranil Pan, chief economist at Yes Bank.

In its last policy statement on September 30, the RBI’s Monetary Policy Committee projected GDP growth for the 2022/23 financial year (April-March) at 7 per cent and retail inflation at 6.7 per cent.

It said its projections were based on an assumption of the Indian crude oil basket being priced at around $100 a barrel on average for the second half of the year but with prices having fallen, that could change.

“We will wait and watch as oil dynamics are not straight forward and can change any time,” said Madan Sabnavis, chief economist at Bank of Baroda.

Sabnavis, who does not see the RBI reducing its inflation forecast, pointed out that though global oil prices have come down, the government has not relaxed duties or taxes.

“Hence, the consumer is still paying the same price and has not derived any benefit from declining oil prices.”

India imports more than two-thirds of its oil requirements and movements in global crude have a direct impact on the country’s trade and current account balances as also its currency and domestic inflation.

Lower oil prices may also be countered by higher than expected food prices.

“Food inflation has been higher than expected on account of unseasonal rains, and took away the inflation advantage,” said Madhavi Arora, lead economist at Emkay Global Financial Services.

The RBI has raised rates by a total 190 basis points since its first unscheduled mid-meeting hike in May and investors expect at least two more rate hikes in the current cycle — including the one on Wednesday.

“The impact of past rate hikes and liquidity tightening measures is yet to be seen. We expect the RBI to be more data-dependent and reactive going forward than raising rates pre-emptively,” said Pankaj Pathak, fixed income fund manager at Quantum AMC.