Cristiano Ronaldo to get $588126 per day salary from Al-Nassr 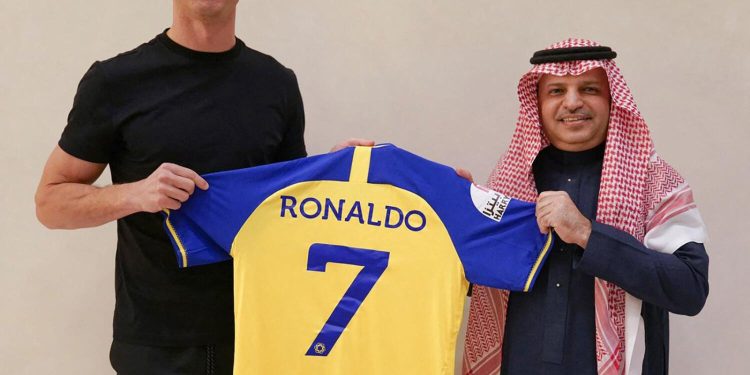 Cristiano Ronaldo has signed for Saudi Arabian side Al-Nassr on a sensational £175million-a-year contract following his tumultuous exit from Manchester United in November.

Ronaldo, 37, had been a free agent after leaving United in the wake of his damning and controversial interview with Piers Morgan.

And Al-Nassr have now confirmed Ronaldo has put pen to paper, with reports in Saudi Arabia stating he has signed on a two-year deal.

The Saudi Pro League club announced his arrival in a tweet saying: ‘The world’s greatest athlete officially signed for Al-Nassr’. 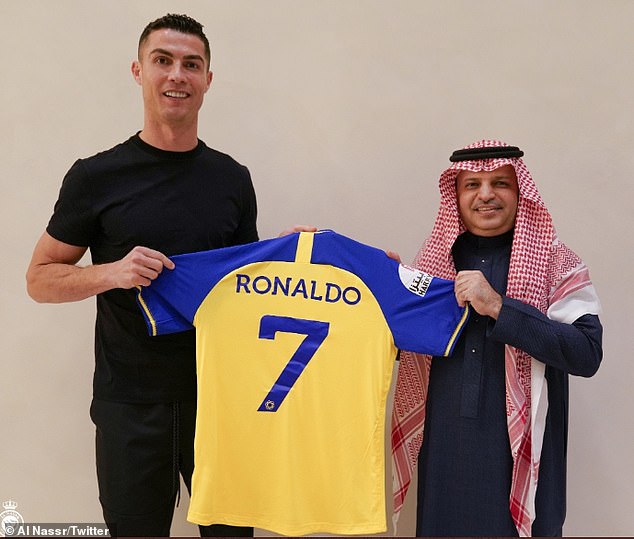 Cristiano Ronaldo (left) has signed for Al-Nassr after leaving Manchester United on a free.

In fact, given the rip-roaring, gobsmacking nature of the final between Argentina and France, it’s easy to forget that the tournament began with a controversial cloud hanging over Cristiano Ronaldo — the world’s single most famous athlete by several different scales of measure — and his Portugal national team.

Following a ridiculous interview with Piers Morgan for British television during which CR7 took shot after unvarnished shot at his club team, Manchester United, as well as its manager and ownership, the club and the player agreed to terminate their contract with one another by mutual consent, making the legendary forward a free agent. As the tournament rolled on, rumblings got louder and louder about a potential blockbuster deal with Saudi Arabian club Al-Nassr awash in the sort of rumored financial terms that would rival the GDPs of any number of developing nations.

Now, we have our confirmation. Ronaldo is truly headed to the Middle East to close out his pro soccer career, and the numbers behind the move are authentically stunning: €200 million per season through the end of the 2024-25 campaign.

If we’re able to stop our heads from spinning for long enough, let’s explore the full details regarding Al-Nassr’s historic Cristiano Ronaldo salary and contract particulars. 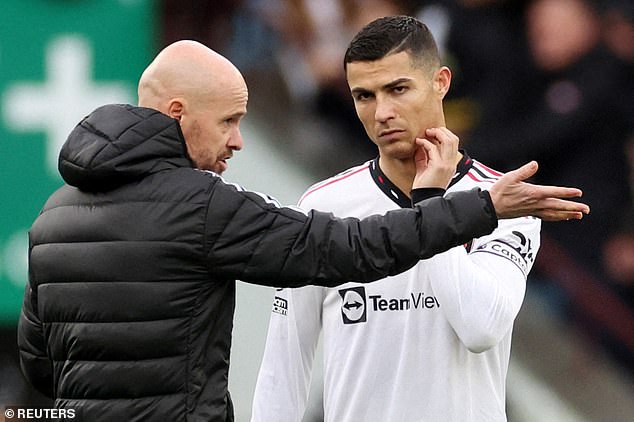 His decision to move to Saudi Arabia effectively ends his career at the top level. It is thought Ronaldo had been hoping to secure a switch to a Champions League club but it never materialised.

Part of his role as an ambassador will be to help Saudi Arabia’s joint bid with Egypt and Greece to host the 2030 World Cup, it has been claimed.

He joins arch rival Lionel Messi in taking up a promotional position with the gulf nation, which has faced criticism for its human rights record, as well as crackdowns on women’s rights activists, LGBTQ+ people and those who speak out against the rule of Crown Prince Mohammed bin Salman.

Ronaldo had initially dismissed reports that he was set to sign for the Saudi outfit, with sources close to the player telling Sportsmail it was ‘nonsense’ that a deal had been signed.

Al-Nassr are one of the most successful clubs in Saudi Arabia, having being crowned winners of the country’s top flight nine times, with their most recent triumph coming in 2019.

Ronaldo had admitted rumours of a €350m (£310m) offer for two seasons from an unnamed Saudi Arabian club in the summer were true – an offer he had declined.

Ronaldo had previously been linked with the likes of Chelsea, Atletico Madrid and Napoli after stunning United officials by telling the club he wanted out in the summer transfer window.

Ronaldo left United in November – having returned to Old Trafford to much fanfare in September 2021- in an acrimonious departure following his incendiary interview with Morgan.

His exit following a mixed second spell at the club was agreed by mutual consent but Sportsmail revealed United did not pay any compensation for the remaining seven months of his £500,000-a-week contract at Old Trafford.

United’s lawyers had been looking to tear up his deal in response to the interview. In the sitdown with Morgan, Ronaldo said he felt betrayed by the club and had no respect for United boss Erik ten Hag.

Ronaldo also took aim at the Glazers’ running of United and his team-mates. The decision to part ways with the Portuguese star came just four days after the second part of the interview aired and was made by Ten Hag, the Glazers, chief executive Richard Arnold and football director John Murtough.

They rejected the idea of more disciplinary action after Ronaldo was dropped and made to train on his own for walking out during the win over Tottenham in October having refusing to come on as a substitute.

Ronaldo’s team-mates had been ambivalent to his inevitable departure and it had been made clear that he would not be welcome back at the club’s Carrington training ground.

Ten Hag hit back at Ronaldo in an interview during the club’s warm-weather training camp in December, with the Dutchman accusing the Portuguese of double-crossing him before eventually leaving the club.

He claimed Ronaldo, who captained United in what proved to be his final United appearance, had stabbed him in the back by waiting for the bombshell interview’s release before telling Ten Hag for the first time that he wanted to quit Old Trafford.

During an hour-long interview at United’s base in Jerez, where Ten Hag and his players had been training during the World Cup break, it was put to the manager that Ronaldo did not have the decency to tell the manager his intentions.

‘Until that moment (the interview) I never heard anything. He never told me, ‘I want to leave’. The interview I think, as a club, you can’t accept. There will be consequences. To make that step, he knew the consequences.

‘I have seen most of it, but not all of it. I think it was quite clear after that he had to leave,’ added Ten Hag, who took the decision to rip up Ronaldo’s contract with chief executive Arnold and football director Murtough six days after the interview aired.

‘We didn’t have to discuss it. It was quite clear. Richard, John, me, it was (done). I think the club can only be successful and operate when all the decision-makers are on one page and back each other.’

Ten Hag brought Ronaldo back into the fold after punishing him for refusing to come on as a substitute against Tottenham in October and then walking out of Old Trafford before full time. He even made him captain in his final game for United at Aston Villa.

Asked if he could forgive the player for turning against him, Ten Hag said: ‘I don’t want to answer this situation. I am open to talk with him, so why not?

‘I did everything honest, open and transparent, and we had talks about my vision, so I don’t have a problem to talk with him. Not that I would say something in particular to him.’

Though there was a strong suspicion at Old Trafford that Ronaldo wanted to force his way out, Ten Hag insists he wanted to keep the 37-year-old.

‘I wanted him to stay from the first moment until now but he wanted to leave,’ he added.

‘When a player definitely doesn’t want to be in this club then he has to go, that’s clear. We want a new future of Manchester United and he didn’t want to be part of it. We move on.’

It had earlier been revealed that Ronaldo instigated the interview which ultimately led to the club cutting ties with a player whose first spell at Old Trafford ensures he retains legendary status among the United fanbase.

Ronaldo’s issues continued at the World Cup in Qatar. There were reports the 37-year-old wanted to walk out of the tournament after he was dropped for Portugal’s round-of-16 clash with Switzerland following tense talks with manager Fernando Santos, but these claims were denied by the player and the Portuguese FA.

Ronaldo became the first male player to score at five consecutive tournaments at the World Cup but struggled in Qatar. He was left out of the team for the Switzerland match and the quarter-final defeat to Morocco having featured in Portugal’s opening group game against Ghana.

He only scored one goal, a penalty against the African side, and failed to influence a Portugal side who – like United – looked a more dangerous team without him.

The forward then took to Instagram to insist he would ‘never turn my back’ on the Portugal national team as he broke his silence on his country’s shock World Cup exit.

‘Winning a World Cup for Portugal was the biggest and most ambitious dream of my career,’ he wrote on Instagram.

‘Fortunately I won many titles of international dimension, including Portugal, but putting our country’s name on the highest foot in the world was my biggest dream.

‘I fought for it. I fought hard for this dream. In the five appearances I scored in World Cups over 16 years, always by the side of great players and supported by millions of Portuguese, I gave my all. Leave it all out on the field. I never turned my face to the fight and I never gave up on that dream.

‘Sadly yesterday (Friday) the dream ended. It’s not worth reacting in the heat of the moment. I just want you all to know that much has been said, much has been written, much has been speculated, but my dedication to Portugal has not changed not for a moment. I was always one fighting for the objective of all and I would never turn my back on my colleagues and my country.

‘Not much more to say for now. Thank you Portugal. Thank you Qatar. The dream was nice while it lasted… Now, it’s hoping that time will be good advisor and allow each one to draw their own conclusions.’

Ronaldo did not travel home with the rest of the Portugal squad, instead flying back with his family on a private jet. He then went to Real Madrid’s Valdebebas base to train alone during his search for a new club.

Ronaldo, who spent nine years at Real before leaving in 2018, was given permission to use the club’s training ground by president Florentino Perez, but was told he could not join members of Carlo Ancelotti’s first team.